A new financial services company has launched a debit card that allows families, friends and carers to manage an elderly person’s financial affairs through a virtual or physical debit card.

The co-founder of GuardianCard, Nick Thompson, says the business and card were created to prevent the elderly being subjected to theft and other types of financial abuse.

He came up with the idea after his mother-in-law almost gave away thousands of pounds to fraudsters.

Thompson expects to have 500 customers on board in the first quarter of this year.

‘We’ve just launched and have a good number of customers going through our on-boarding process,’ he explains.

‘We’re also getting a lot of care and support providers who want to give financial protection to the people they look after,’ he says.

The card is designed to give a carer or trusted family member access to the day-to-day finances of an older person or relative. Carers can get access to an elderly person’s account via physical or virtual cards, and can pay bills and shop on their behalf.

My mother-in-law nearly gave away several thousand pounds, but it’s only through conversation we managed to prevent it from happening

The GuardianCard can be used anywhere the Mastercard logo is displayed, and spending limits can be set to keep control of the cash.

Family members can keep track of the transactions by viewing real time transaction reports, which show how much has been spent, by who and where. Limits can be set on where the cards can be used, for example in-store, online or at an ATM. 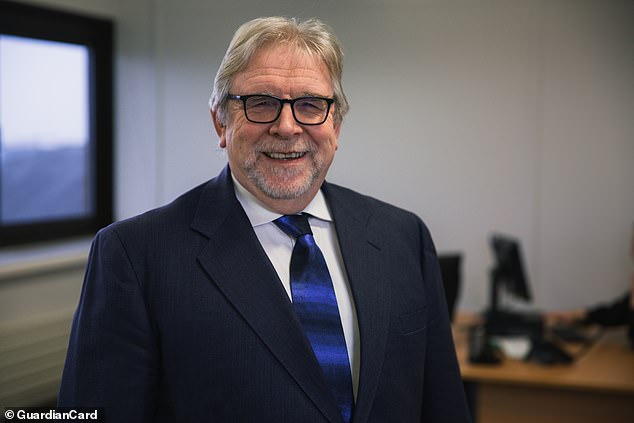 The system is not yet foolproof. For instance, it’s not possible to gauge exactly what the purchaser spent the elderly person’s money on, unless he or she uploads the receipt.

GuardianCard says on its website that it doesn’t make any money from interest or debit, unlike the high street banks. Instead, it covers the costs through its membership fee.

Co-founder of GuardianCard, Nick Thompson, adds: ‘We thought long and hard about this, and what we wanted to do was come up with a fair price without hidden charges. We believe that, with the five cards users can take out, it offers good value.

Any overseas transactions in foreign currency will be converted into pounds at the rate of exchange provided by Mastercard. Nick says: ‘There are some usage charges overseas but no other charges in the UK.’

This means there’s still the potential for temptation theft to occur, unless family members demand that receipts are uploaded at the time of purchase so that each item can be scrutinised.

Thompson says: ‘If someone didn’t upload the receipt then it would take a while to work it out. But it could help you identify an issue early on.’

For further protection and privacy, no one is able to see how much money lies in the main bank account and cards can be blocked and unblocked at the touch of a button.

GuardianCard’s offering is very niche, and at the time of writing few banks offer a carer’s card option. The exception is Santander, which has a Carers Card Account.

Just like most children’s card providers, GuardianCard charges monthly fees to the account holder (see: ‘How much does it cost?’). That is not the case with the Santander account, although it is more limited as it only offers the option to have two additional card holders.

There are no perks for GuardianCard members, but it’s something that may be offered in the future.

Thompson says: ‘Right now there are no rewards. But we do intend to give five per cent of profits to an elder charity nominated by our members. Perks may come later on.

‘Our ambition is to build a community where people can help each other. We’ll see how that goes and then add perks as we develop.’

Risk of fraud and financial abuse

Thompson co-founded the business along with Aiden McAllister. Thompson says the business was bootstrapped with their own funds. It initially offered customers a pre-paid card, but then about nine months later launched a debit card.

The duo launched GuardianCard after both found themselves taking care of elderly relatives. McAllister supported his parents when they became less able to manage their day-to-day finances, while Thompson was concerned about his mother-in-law, aged 80, becoming an easy target to rogue traders.

Thompson says he wanted to take the stress and worry away from his mother-in-law so that she could enjoy her life. He explains: ‘My mother-in-law nearly gave away several thousand pounds, but it’s only through conversation we managed to prevent it from happening.’

Thompson adds that because they used their own funds, the duo is able to manage the company as they want.

‘We’re not in the pocked of venture capitalists,’ he says. ‘We just wanted to do this to help support people and ensure elderly relatives stay independent for longer.

‘We’re not focused on driving numbers, we’re looking to create something that works. We have a customer service team and want to create a family feel.’

Sadly, there are always people who are willing to take advantage of elderly people, whether it’s family members, carers or professional scammers

Sadly, the experiences of their relatives are not uncommon.

GuardianCard conducted a poll in January this year which surveyed 2,000 UK adults, and found that a quarter of people aged over 70 or above had suffered financial abuse.

It also found that more than half (56 per cent) of elderly people feared they had become more of a target for thieves, scammers and fraudsters due to the pandemic. 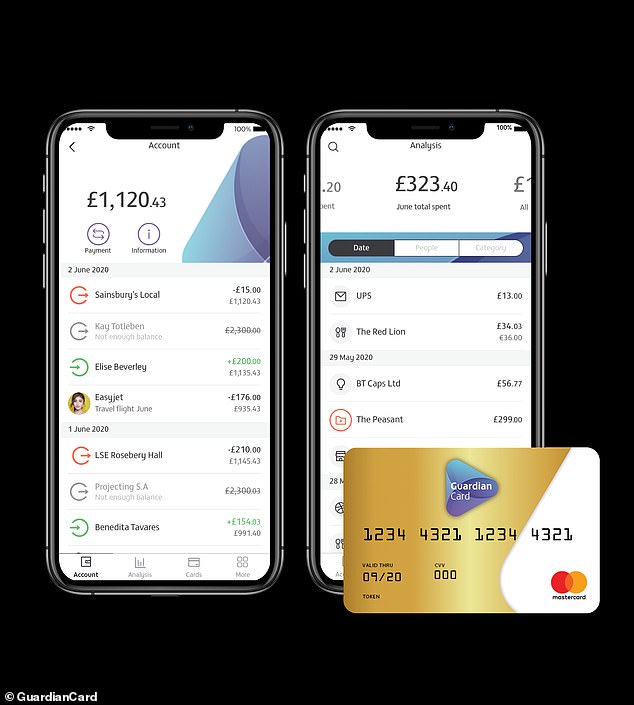 Family members can keep track of their elderly relative’s transactions by viewing real-time reports which shows how much has been spent, by who and where

GuardianCard says it can also be a simple as a carer, relative or neighbour stealing from an elderly person by adding items for themselves when they’re out running errands for them or doing their shopping.

The most common type of abuse reported by the people surveyed in GuardianCard’s report was falling victim to professional scammers, with 68 per cent saying they had been targeted in this way.

Thompson says: ‘Sadly, there are always those who are willing to take advantage of elderly people, whether it’s family members, carers or professional scammers.

‘It’s also apparent that Covid has made them more of a target for financial abuse. The pandemic has created a perfect storm, as elderly people have become even more socially isolated and vulnerable while there are those – perhaps facing financial pressures and money troubles – who see it as an opportunity to scam or steal from them.’

Santander’s 123 Lite Account will pay up to 3% cashback on household bills. There is a £1 monthly fee and you must log in to mobile or online banking regularly, deposit £500 per month and hold two direct debits to qualify.

Virgin Money’s current account offers 15 bottles of wine worth £180 when you switch and pays 2 per cent monthly interest on up to £1,000. To get the bonus, £1,000 must be paid into a linked easy-access account and 2 direct debits transferred over.

Club Lloyds’s Current Account offers benefits such as cinema tickets, magazine subscriptions and dining cards to current account holders. There is no cost if you pay £1,500 each month, otherwise a £3 fee applies. Must hold two direct debits to earn monthly credit interest.

Metro Bank will give newcomers referred by existing customers £50 to open a current account. Existing customers can refer up to five friends for a total of £250. Customers must switch through CASS, deposit £500 in each of the first two months and make 10 debit card purchases over that time.

Nationwide’s FlexDirect account comes with 2% interest on up to £1,500 – the highest interest rate on any current account – if you pay in at least £1,000 each month, plus a fee-free overdraft. Both perks last for a year.