Would you want to share a bed with a man wearing a mask with a long tube protruding it?

Marriage can be such a slog. And for many of us there is that depressing realisation that you can never win.

At least, that’s how it feels in our household. For years I have been told to do something about my snoring. And now I have — but my wife tells me it’s ‘freaking’ her out because ‘it’s like sharing a bed with the elephant man’.

Admittedly, I am not a pretty sight in my bedtime mask with a long tube protruding from the front; it doesn’t make for much in the way of pillow talk, never mind anything more intimate, but it’s done the job.

Finally, after more than ten years, my wife Joanna gets a decent night’s sleep. At least we are sharing the same bed again — it wasn’t so long ago that I woke one morning to find Joanna curled up in the bath, wrapped in a blanket.

The big change came at the start of the year, when I was given what’s called a CPAP (continuous positive airway pressure) device, which blows air via a mask through my nose and down my throat, opening the airway and stopping me from snoring, and so allowing me — and my wife — a more restful night.

For years I have been told to do something about my snoring. And now I have — but my wife tells me it’s ‘freaking’ her out because ‘it’s like sharing a bed with the elephant man’ (file image of a CPAP mask)

CPAP masks are currently being repurposed to deliver oxygen to Covid-19 patients in hospitals. Those who already have been supplied with one have not been asked to hand them back, and I’m told they are still being given to fellow snorers in key roles for whom a good night’s sleep is vital.

Resolving my snoring has been a journey — as modern parlance puts it. In fact, it goes back to my father, who snored for Britain — and snoring, like having an eye for a ball, can run in the family, as I’ve found out.

But the brutal truth is that those of us who are overweight and enjoy our vino rather too much are more likely to snore. This is because fat in the neck area tends to make the upper airway narrower, and alcohol reduces muscle tone, which makes it harder to hold the airway open.

And because as a country we are increasingly overweight, it means more of us are becoming habitual snorers. No one knows for sure, but it’s thought there are at least 15 million of us in the UK.

‘It’s a growing problem at a time when obesity is on the rise, and one that damages the quality of life not only of the person suffering from OSA, but also their partner,’ says Dr Michael Polkey, a consultant physician at the Centre for Sleep at the Royal Brompton Hospital in London.

‘Sleep apnoea is a disease and many people don’t realise they can do something about it.’

I’ve spent the best part of a decade trying to do something about it — but, until now, to no long-term avail.

I spent silly money on nose strips, throat sprays, lozenges and herbal drinks. I had more success five years ago with SnoreWizard, a ‘mandibular advancement device’ that looks like a mouthguard and which moves the jaw forward, thereby slightly opening the airway to improve air flow.

But after a few months, my snoring found a way to outwit it.

‘You need to drink less,’ said Joanna. Guilty as charged. I probably drink two-thirds of a bottle of wine most nights — but not all drinkers snore.

A few years ago, I made an appointment at a Harley Street practice where a woman in a white coat told me I was the ‘perfect candidate’ for laser surgery to remove most of my uvula — the tissue that dangles from the back of your throat — and other tissue that was vibrating noisily while I slept.

The procedure, known as uvulopalatoplasty, cost nearly £2,000 and there might, she added, be some bleeding and mild infections during the recovery period. I made my excuses and left.

Then, towards the end of last year, my GP referred me to the Royal Brompton Hospital for a ‘sleep study’ because they suspected OSA.

I was equipped with two bands to put around my chest and tummy while I slept at home. These contained a wire that changed shape when I moved, altering the electrical impedance and allowing an expert to measure the absent air flow (or apnoea) during rib cage movement.

I was also given a microphone to attach to my throat and an air-flow sensor to put just above my lips. A black box joined the party, recording all this information for Dr Polkey. He subsequently diagnosed moderate OSA.

This means that I stopped breathing every four minutes because not enough air was going through my airway. Someone with severe OSA might stop breathing every two minutes.

‘That sounds alarming, but you won’t die,’ he said. ‘Instead, your body wakes you up. Then you go back to sleep and the same thing happens, complete with loud snoring as air struggles to make its way through the narrow airway.’

Interrupted sleep — both for the snorer and their bedtime companion — means you both wake feeling unrefreshed and irritable. 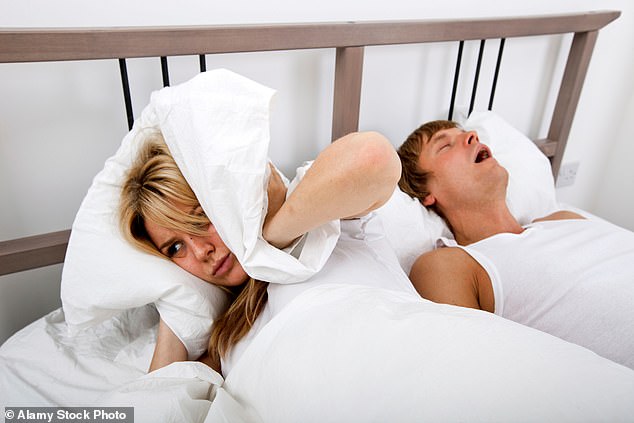 Studies show more than 50 per cent of people with OSA have high blood pressure, as frequent night-time waking stops the body relaxing and repairing itself sufficiently. Snorers are also five times more likely than non-snorers to develop hypertension, heart disease and strokes.

The social effects of sleepiness are more difficult to determine, but it can lead to depression and lack of libido (associated with erectile dysfunction in approximately 30 per cent of male patients), plus exhaustion during the day, napping at odd times, marital breakdown and falling asleep while driving.

When Dr Polkey raised the prospect of my wearing a CPAP device, I was all for it.

It’s a simple but clever machine that blows air from the room through a tight-fitting mask that covers the nose or both nose and mouth. Dr Polkey believes they can be ‘transformational’.

I don’t like wearing it. It needs to be attached firmly to prevent air escaping and making a hissing sound. The flexible hose is attached to a black box the size of two bricks, which in turn plugs into an electric socket.

It’s relatively easy to move around wearing it, but you can’t talk properly while it’s on and if you get an itch on your nose, it’s a laborious business to switch it off, remove the mask, deal with the itch and start all over again.

My CPAP fits snugly into a bag the size of a laptop case. I take it with me on holiday and it seems to be treated at security like any other electrical device.

A lot of people tend to give up on CPAP. In fact, a study of 80 patients in the U.S. showed 15 per cent abandoned CPAP within 15 months. But after nearly four months, I’m hanging in there, not least because the discomfort gives me an incentive to deal with some of the lifestyle issues that lead to severe snoring. (Although during the lockdown I don’t seem to be making much progress.)

An easier solution might be in the offing. At a recent sleep apnoea conference, Dr Polkey learned of a new drug that strengthens the throat muscles, helping to reduce snoring, and it could be available within five years.

‘For now, CPAP is by far the best solution — but there are thousands of people whose sleep apnoea continues undiagnosed,’ he says. ‘The message I’d like to get out is that you don’t need to suffer in silence. Or, rather, at full volume.