Advertising giant WPP has upgraded its sales outlook after successfully striking more tie-ups with some of the world’s most famous brands.

The world’s biggest advertising company revealed first-quarter revenues increased by 6.7 per cent to more than £3billion as it benefited from new partnerships with the likes of electronics manufacturer Samsung and digital payments firm Square.

New deals: The world’s biggest advertising group revealed first-quarter revenues grew to over £3billion as it benefited from new partnerships with the likes of Samsung and Square

In total, the blue-chip listed group won $1.8billion in new business in the first three months of 2022, which comes on top of the massive contract it gained from Coca-Cola last year to run the soft drink firm’s global marketing campaigns.

These deals helped its revenues exceed analyst forecasts to surpass £3billion, while they expanded by 9.5 per cent on a like-for-like basis when discounting pass-through costs – its preferred net sales measure.

Following this performance, it now anticipates growth of 5.5 to 6.5 per cent this financial year, compared to a previous forecast of 5 per cent, even with the present geopolitical uncertainty caused, in part, by the Ukraine War.

WPP became one of the first advertising companies to announce that it was winding down operations in Russia because of the country’s full-scale invasion of its western neighbour.

Chief executive Mark Read said an agreement had been reached to divest WPP’s Russian businesses, a move expected to cost the firm up to $45million, although the country represented less than 1 per cent of total revenue in 2021.

He added that the group were ‘very mindful of the impact of the broader macroeconomic environment on our business and will respond quickly to any changes as the year progresses.’ 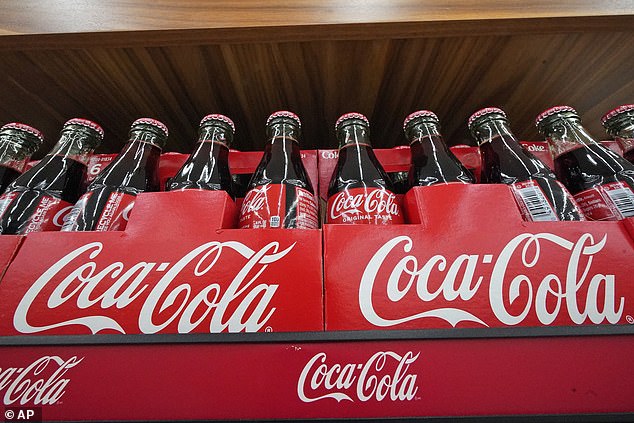 Big wins: WPP gained $1.8billion in new business in the first quarter, which comes on top of the massive deal it agreed with Coca-Cola last year to run its global marketing campaigns

Nonetheless, Read, who succeeded advertising tycoon Martin Sorrell as boss, observed there was ‘strong demand’ for the company’s services, especially in fields such as online commerce, marketing technology and digital media.

Just this week, WPP launched an end-to-end online commerce service called Everymile that will create online stores and look after purchases for businesses.

Sophie Lund-Yates, Hargreaves Landsown’s lead equity analyst, said this increasing focus towards more towards digital marketing is responsible for much of its success.

She added: ‘This is an important pivot because above-the-line marketing is very expensive compared to digital tactics and is, therefore, the first to get cut from marketing budgets when the economy sours. WPP will not be immune to this – it still has a lot of fingers in traditional-marketing pies.

‘WPP is a more nimble beast than it was, which makes it much harder to topple in times of difficulty. That said, with the macro environment still jittery at best, the medium-term outlook isn’t looking totally clear.’

WPP shares were down 1.25 per cent to 977.6p during the late afternoon on Wednesday, although their value has climbed by more than 81 per cent in the past two years.