Writer Bella Mackie: I ran from misery… and towards happiness with Radio 1 DJ Greg James

When Bella Mackie’s first marriage broke up, her mental health hit rock bottom. Desperate as her world closed in, she took up jogging – and, when she was least expecting it, found her soulmate in Radio 1 DJ Greg James

Breaking up, as the song tells us, is very hard to do. It’s a ritual most of us have had to face at some point, but how do you handle the demise of a relationship? Get a haircut, spend time with friends, listen to sad songs? These are all normal ways of coping with heartache. But what if you have mental health problems and can’t cope with everyday life, never mind unexpected emotional pain? How do you handle a break-up then?

I found myself in this position five years ago, aged 29, when my marriage broke down after just eight months and I was left trying to handle both a bruised heart and a broken brain. Relationships are hard work, and they’re made harder when one or both partners are struggling with mental illness – normal marital problems are amplified, insecurities can mushroom, misery might take over.

Bella was loving her independence – but then she met Radio 1 DJ Greg James. Bella writes: ‘I found out it was easy to be in this relationship and look after my mental health, too’

I had spent a lifetime not dealing with my mental health problems – predominantly anxiety, depression and OCD – and getting married only exacerbated them. It’s hard to ask someone else to love you, to know you, to look after you, when you can’t do any of those things for yourself. My ex-husband and I lived on different plains, and the connection we were supposed to share slipped away. By the time it all ended – and he told me he no longer loved me – I was swimming in anxiety, fully immersed in my worries and fears.

My husband left and I wept, binge-watched TV shows, drank wine alone late into the night and tried to make myself numb. I wanted to tackle the break-up maturely and sensibly, but I had no coping skills, and I was terrified that I would use this moment as an excuse to retreat into my fears even more, to hide at home. I was already mildly agoraphobic, scared to leave my self-designated ‘safe places’ – my home, my office and the local pub. I rarely went to meet friends in unfamiliar places and was adept at making excuses not to connect with people.

Friends and family came round to spend time with me at home, but I was terrified that this trauma would be the thing to leave me totally housebound. The idea of being alone with my demons pushed me into action. A terrible thing had happened, and my carefully laid safety nets hadn’t prevented it. As a result, I felt slightly reckless. After a month of wallowing, I was keen to do something that would get me out of my flat and hopefully get me out of my head, too.

With no stores of confidence to call on, I knew I couldn’t do anything communal or public such as a gym class or a college course. Helpfully, this narrowed things down and I ended up deciding to go for a run. I’d tried to jog before, but found it daunting. It looked like something only the ultra-fit could do, not a woman scared of everything who existed on a diet of crisps and Coca-Cola.

By making me focus on my surroundings, jogging gave me a break from my swirling intrusive thoughts

That night, I searched Spotify for angry music, and laced up my old trainers. I walked to an alleyway near my flat in North London and hovered for a bit, making sure that the coast was clear. When I was certain there was nobody around to laugh at me, I turned on my chosen motivational music (Puddle of Mudd, since you ask) and lurched into gear.

The run lasted about three minutes – the length of just one song. And despite being such a short distance, it was hard. My lungs burned, my calves ached and I hated every minute of it. But for three minutes, I’d done something different. I’d focused on moving my feet and pushing myself forward. I’d given myself a break from the misery.

I cannot pretend that I felt magically cured by my brief shuffle or that I ran 5km the very next day. Developing a habit takes an average of 66 days, according to researchers at University College London. Shrugging off my fears and sadness would take a lot longer, but I carried on jogging, returning to the alley and running for a little longer each time. I didn’t tell anyone what I was up to, partly because I figured I’d give it up soon enough, like I did with most things when I felt down and defeatist. Plus my anxiety meant that I was heavily reliant on others – my family and friends – to look after me, so it felt nice to try something by myself.

I never enjoyed the running part much in those early days, but I began to notice that it was having an effect. Panic attacks were rearing up less and less. My mind was a little bit quieter – by making me focus on my surroundings and where I was going, jogging gave me a break from my swirling intrusive thoughts. I felt less hopeless and more capable.

As I ran for longer, I’d feel emboldened. One day, when I changed my normal route and headed into the bustle of the city, I felt a new sensation: I felt free. This wasn’t a dramatic realisation, accompanied by a beam of light from the sky. Instead I noticed a small rush of optimism, realising that I was among thousands of people just going about their day. London no longer felt menacing; it felt like a place I was a part of for the first time in years. 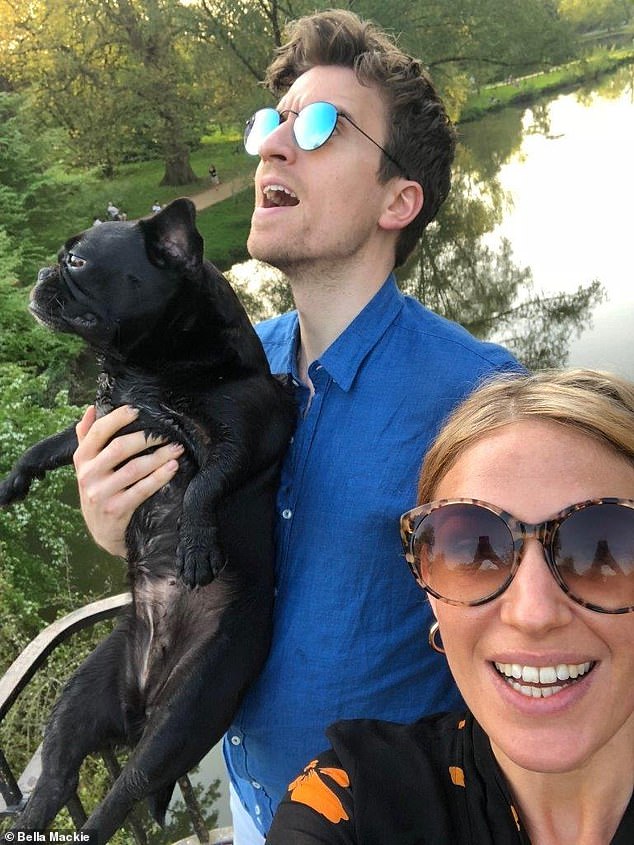 Bella and husband Greg with their dog Bonnie. ‘There is a hoary old cliché that love comes when you stop looking for it, but I think that’s rubbish. If anything, it comes when you’re not that fussed about it,’ writes Bella

Friends and family were quick to notice a change in me. I took the train to meet a friend across town and she almost fell off her bar stool when I turned up alone and triumphant. My problems had seeped into almost every moment of my adult life – from feeling panicky on a crowded bus to trying to go on my honeymoon without spiralling into anxiety – so being able to run down the street on my own felt as though I’d won an Olympic medal.

I grew to love the previously intimidating city – noticing beauty in the buildings and the eccentricities of their residents. Without running, I’d never have found places such as the Watts Memorial near St Paul’s Cathedral (which honours heroic men and women who have given their lives attempting to save others) or seen a man swimming along the canal in broad daylight.

I have now run almost every day for five years. It has not totally cured me of my issues – it would be disingenuous to say that – but jogging has been the one really helpful tool in my kit and the most vital of them all (calming teas and hypnosis never did anything for me). Running has helped me push back the symptoms of anxiety and I feel the mental benefits of it every single day. Being able to run 10km without stopping made me daring in other ways – I felt emboldened to take more risks, pushing myself in my work as a journalist and author and to enjoy social opportunities freely – and it let me know that I could commit properly to things for the first time. Running boosted my body confidence, too. I felt stronger, less likely to crumble at the first signs of panic. If I felt lonely, I would do laps around the park; if I felt grumpy, I’d dash out for a speedy 15 minutes to knock that low mood out of me.

I realised I didn’t need a partner to look after me. And that made me gradually feel better about being single again, sleeping in the middle of the bed starfish-style, waking up when I wanted, cooking and enjoying spending time on my own, probably for the first time in my adult life. I realised I had been too hasty to couple up, to find someone who would make me feel normal, and no one person should take on that mantle. It should really be you who makes you feel complete – then any relationship is a bonus. I came to rely on myself more and more. That’s not to say that I didn’t need my loved ones – far from it – but I could sense moments of anxiety creeping in and know what to do when I felt sad or panicky. By running, I felt as though my body and mind finally connected properly, and that meant I could recognise the physical symptoms of mental illness such as pumping adrenaline or overwhelming exhaustion, before the mental ones worsened.

There is a hoary old cliché that love comes when you stop looking for it, but I think that’s rubbish. If anything, it comes when you’re not that fussed about it. I met a man one day and we struck up a friendship. Greg [James] was working as a radio DJ and we met through work. We shared the same sense of humour and an intense love of eating too much food. Even when, months later, Greg asked me out on a date, I wasn’t 100 per cent certain that it was a date – I was just enjoying meeting new people and breaking out of the safety net of my closest gang. But it was a date and it quickly became a lot more. 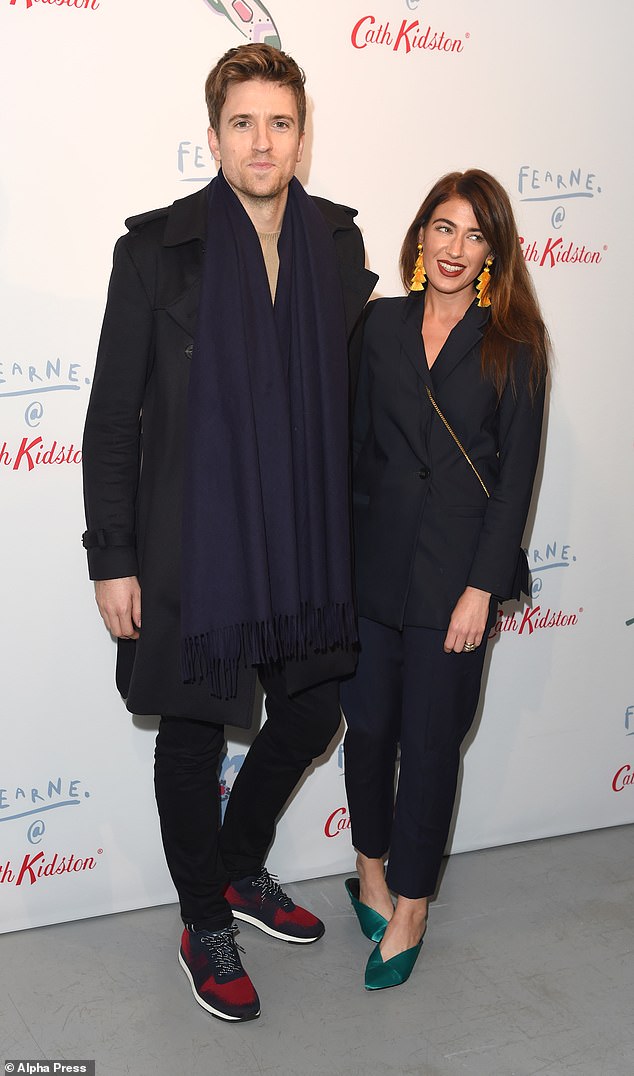 Bella proposed to Greg over dinner. ‘We shared the same sense of humour and an intense love of eating too much food’

I wasn’t in any rush to find love, but when it came along I felt so confident in my decisions and happy with myself that the offer was an obvious one to grab. Nothing felt rushed; it just felt as though I was being swept along by something inevitable, which is a strange feeling for one so desperate to be in control. For a long time, I didn’t think I’d get married again. I had come to prize my hard-won independence and didn’t want to regress or rely too heavily on another person to make me ‘normal’. My mental health always has to be my priority – perhaps that sounds selfish, but it means I’m then able to look after others as well. And I found out it was easy to be in this relationship and look after my mental health, too.

BELLA’S ADVICE FOR GETTING ON TRACK

I began to view marriage differently. I saw it as a wonderful shared companionship for two people who are secure in themselves and can stand on their own two feet – so much so that I proposed over dinner one night back in February. We got married in September. I ran on the morning of our wedding, just to keep a promise to myself never to let it slide.

My biggest achievement is not marriage or love, it’s tackling my mental health problems and continuing the commitment I made to keep on top of them. I still go jogging six or seven times a week – Greg understands how important this mental and physical space is to me. He runs, too, and we’ll happily meet for breakfast when we’re both finished. That’s my kind of marriage.