Dane Cook, 50, is accused of inviting girls ‘as young as FOURTEEN’ to ‘game night’ parties at his mansion: Fiancée Kelsey Taylor, 23, was first spotted at one of the bashes when she was 17

An internet-sleuthing writer claims comedian Dane Cook regularly invited girls as young as 14 to ‘game nights’ at his home, with his new fiancée Kelsi Taylor appearing at one of them aged just 17.

Cook, 50, who this month became engaged to Taylor, 23, has previously said the pair met at one of the ‘game night’ parties he regularly hosts at his Los Angeles home.

Writer Tracie Egan Morrissey took to Instagram to point out that in 2016 Cook posted a photo from one of his game night parties with Taylor in it, suggesting she was 17-years-old at the time.

Cook – a prolific Instagram user with 741,000 followers – says he did not get into a romance with Taylor until she was 18.

In a lengthy Instagram story, Morrissey detailed how a dig through Cook’s social media to look at photos from his game nights found a number of photos revealed underage girls – one said to be as young as 14 – regularly attended the parties.

They were also filled with far older men, many of whom appeared to be middle-aged.

Kelsi Taylor’s first appearance on fiancée Dane Cook’s social media. She was 17 in this 2016 photo 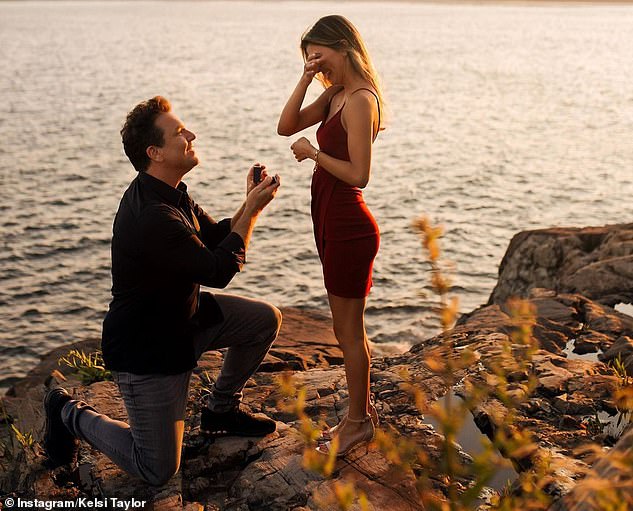 Cook, 50, and Taylor, 23, were engaged in Maine last week. Taylor is not Cook’s first younger girlfriend. He previously dated Playboy model Amanda Cerny when she was 20 and he was 39

Cook frequently posted group photos of the attendees of his game night parties, evidence which Morrissey used to track who attended the parties and how old they were when the did.

Morrissey noted that Taylor first appears in one of these photos with Cook on October 8, 2016, several weeks before she turned 18.

The couple have a 26 year age gap, and have been dating for five years. They started seeing each other when Taylor was 18.

Beyond Cook’s newly betrothed, Morrissey said her search through Cook’s Instagram revealed a number of underage girls and young women at his parties.

She pointed out shots of actress Saxon Paige Sharbino from when she was 16, including individual photos of her and Cook when she was 15.

A sleuth on Reddit noted that King’s sister, five years her senior, was also in attendance.

One photo showed actress Emily Alyn Lind at one of his parties when she was just 14-years-old, according to Morrissey.

In it, she stands in the group alongside Cook, who has is arm around her shoulder.

There is no suggestion of impropriety or wrongdoing on Cook’s part, and he is yet to comment on Morrisey’s allegations against him. 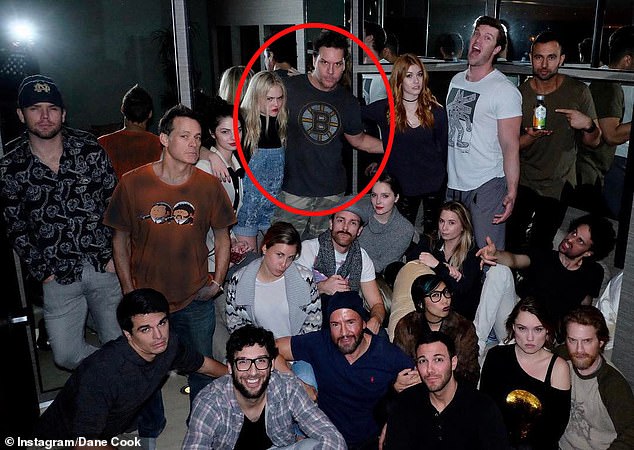 Actress Emily Alyn Lind attending one of Dane Cook’s parties, allegedly at the young age of 14. Cook appears to have his arm around her 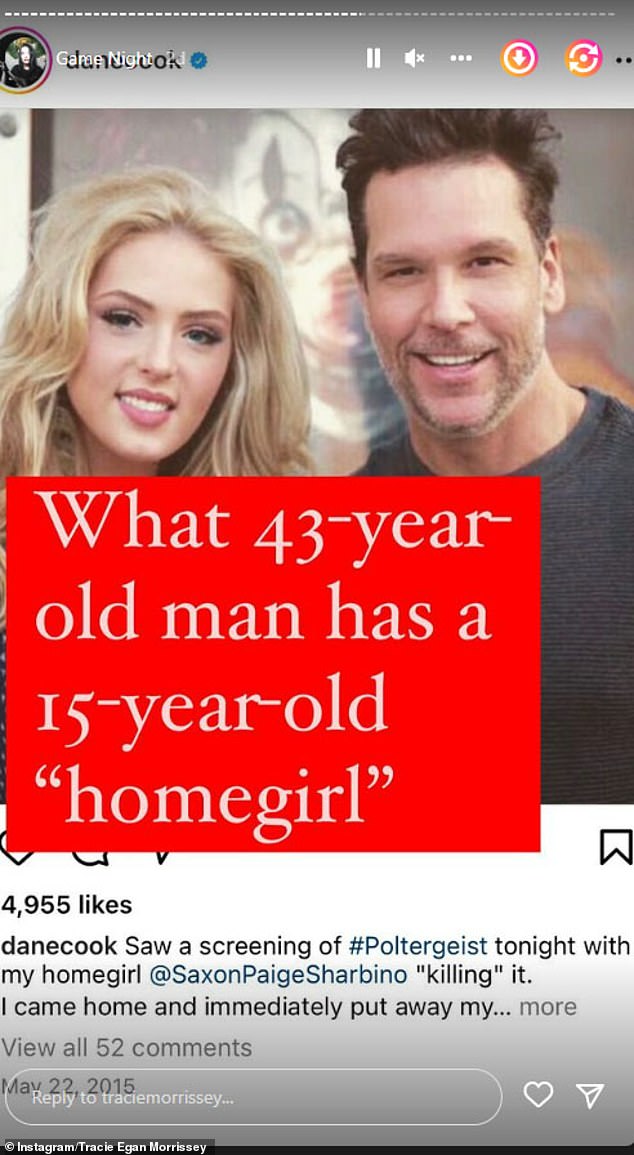 A grab from Morrissey’s story. She said Saxon Paige Sharbino was 15-years-old in the above photo 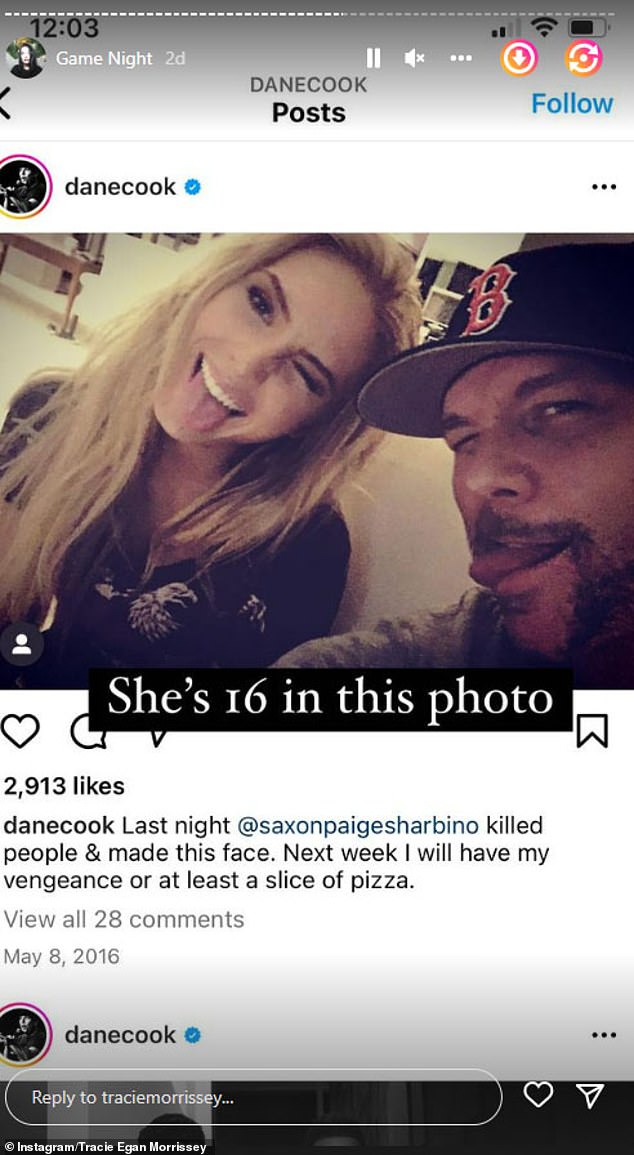 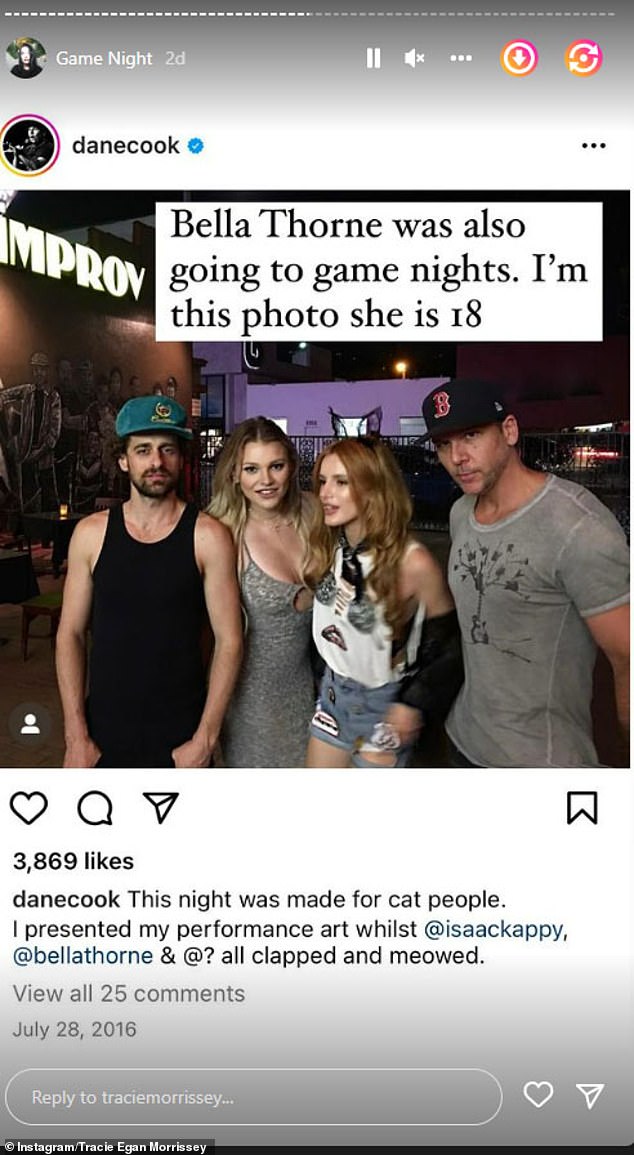 Morrissey said that beyond underage girls young women also frequently appeared, including OnlyFans actress Bella Thorne when she was 18-years-old

Morrissey said that beyond underage girls young women also frequently appeared, including then 20-year-old actress Amy Forsyth, and OnlyFans actress Bella Thorne when she was 18-years-old.

In her story Morrissey pointed out that none of the young women or underage girls listed in her investigation follow Cook on Instagram.

She also revealed and that he does not follow them, and suggested that whatever sort of relationships they had to one another had gone sour.

The Massachusetts-born comedian previously dated Playboy model Amanda Cerny when she was 20 and he was 39.

Dane Cook has not commented on Morrissey’s accusations.