WWII veteran, 96, shaves his hair into a mohawk to bring joy during the coronavirus pandemic

A 96-year-old WWII veteran first wore a mohawk to intimidate Germans before D-Day, and now he’s done it again to spread joy during the coronavirus pandemic.

Guy Whidden of Frederick County, Maryland, was a 20-year-old paratrooper with the 101st Airborne Division in 1944 when he decided to style his hair into a mohawk.

The idea, which was popular at the time, was to unnerve opposing German soldiers on the battlefield.

Guy Whidden (pictured), was a 20-year-old paratrooper with the 101st Airborne Division in 1944 during WWII

Whidden was the only man in his unit who donned a mohawk that day, and when a lieutenant ordered him to shave it off, he did.

Although he regrets not keeping the mohawk, Whidden said the COVID-19 outbreak inspired him to bring the fearless haircut back.

He hoped it would bring laughter amid the outbreak and pay tribute to his fallen friends.

‘A lot of people are going through a lot of problems with the [coronavirus], some of them are frightened, some of them are just concerned, and they’re locked in and it gets boring to a certain extent,’ he told The Frederick News Post. 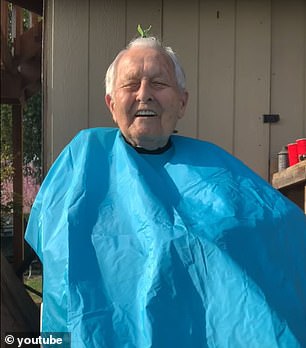 Whidden (left and right), with the help of his granddaughter, shaved his hair into a mohawk this month to spread joy during the COVID-19 pandemic

‘I just thought this would add a little humor or something to the whole thing.’

So Whidden and his granddaughter, Lydia Arshadi, grabbed an electric shaver and got right to work.

Footage of the hair transformation showed Whidden donning a blue barber’s cloth and a bright green hair clip to hold up his hair while sitting outside.

Nearly 20 minutes later, Whidden was once again sporting his mohawk. 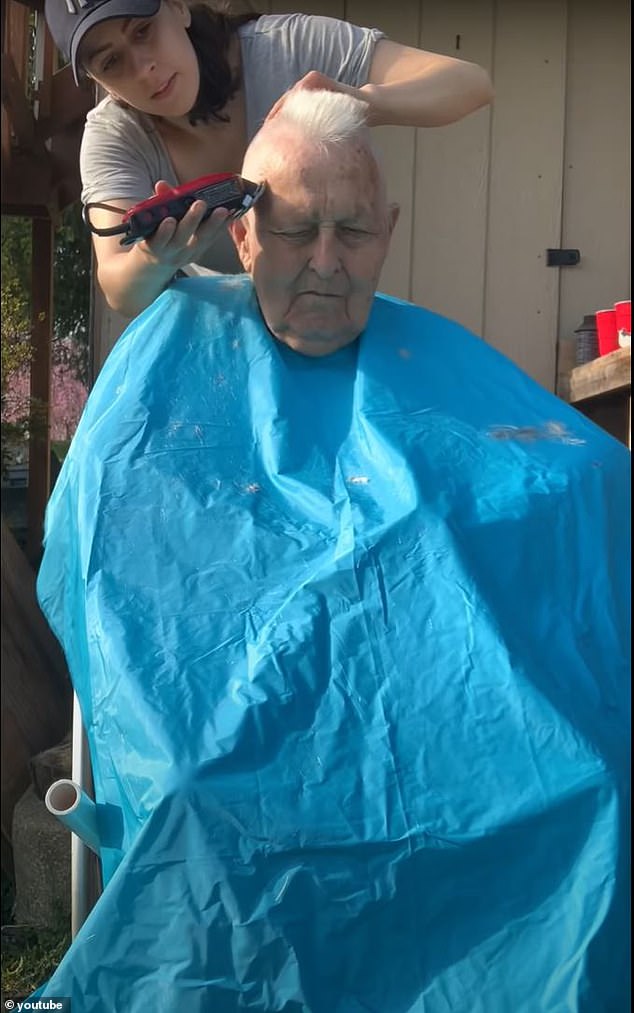 Whidden (pictured): ‘A lot of people are going through a lot of problems with the [coronavirus], some of them are frightened, some of them are just concerned, and they’re locked in and it gets boring to a certain extent’ 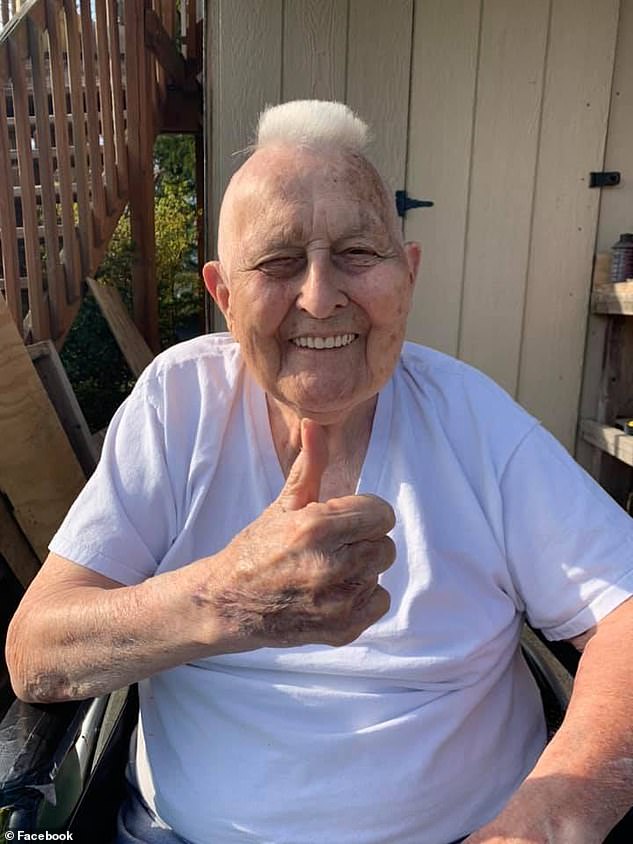 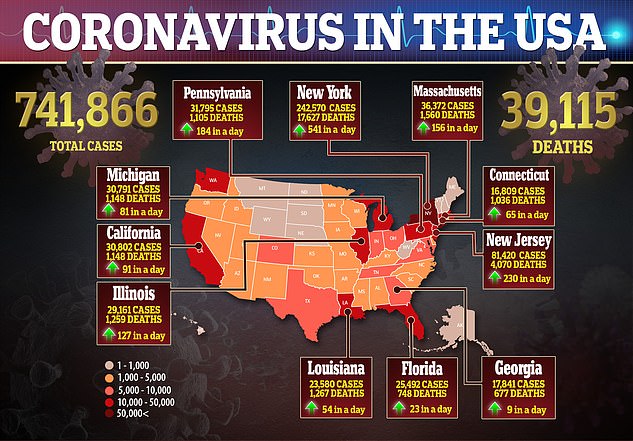 ‘I feel like a young buck!’ Whidden said, adding that ‘It turned out pretty good, except it’s gray.’

The video has since gone viral on social media and inspired others to do the #MohawkChallenge after Whidden challenged others to join in.

‘I’ve always been optimistic all of my life. A smile goes a long ways,’ Whidden said.

‘So I thought that might create a little interest among my airborne friends, a lot of them who are currently airborne, not just the old timers like myself. I don’t think any of them are interested in wearing a mohawk. But I’d like to.’ 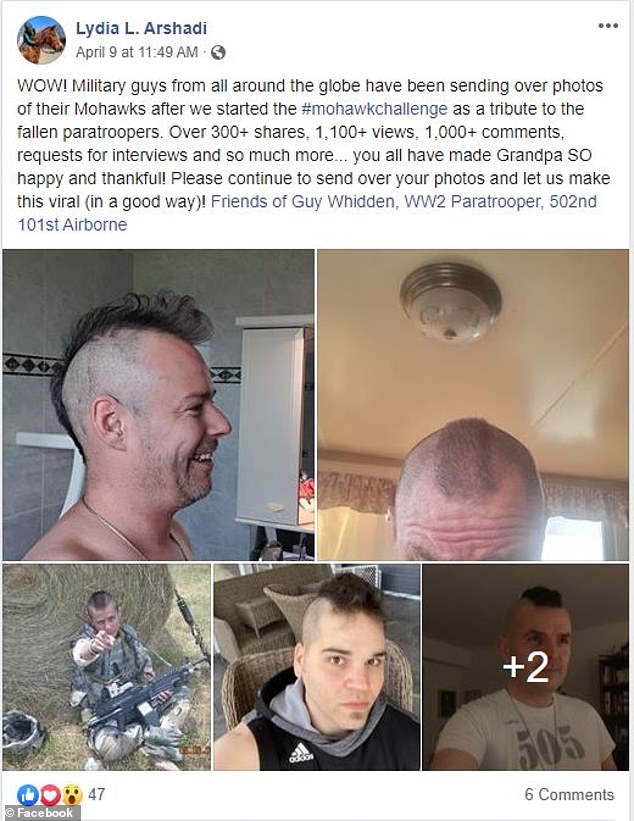 Pictured: Servicemen who shaved their hair into Mohawks as part of the #MohawkChallenge 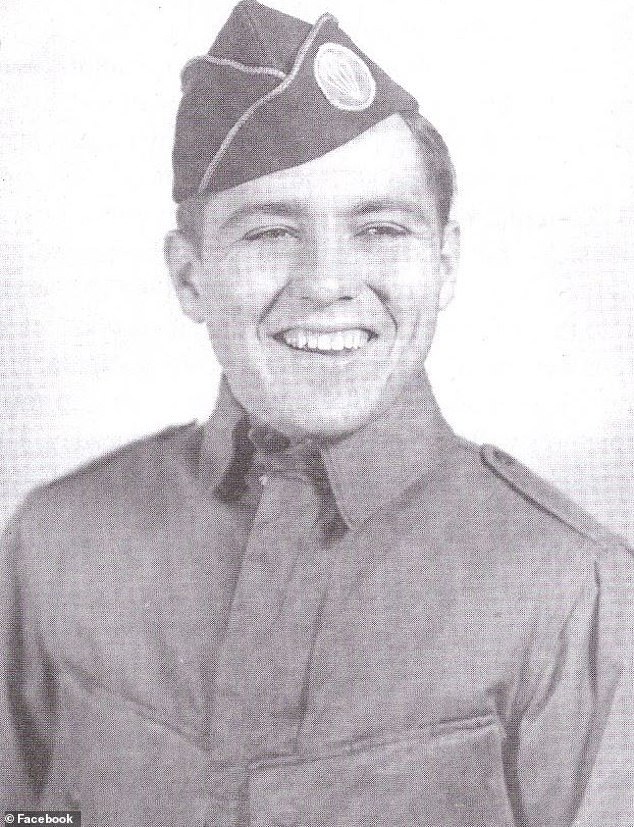 Whidden compared WWII to the COVID-19 pandemic that has infected 741,866 and killed 39,115 Americans as of Sunday morning.

‘This isn’t easy for people, and everybody’s working together, and that’s the good part of it, just like we did back in World War II.’

Arshadi, who traveled from New York City to stay with her family, said the video helped bring people together amidst all the uncertainty.

‘I felt very privileged to do this as a tribute to his fallen comrades. But more importantly, it’s just a way for us to bring everybody together, and make things a bit more lighthearted than they are now,’ said Arshadi.

‘And I think aside from the tribute, everybody got a good giggle to see a 96-year-old with a mohawk.’ 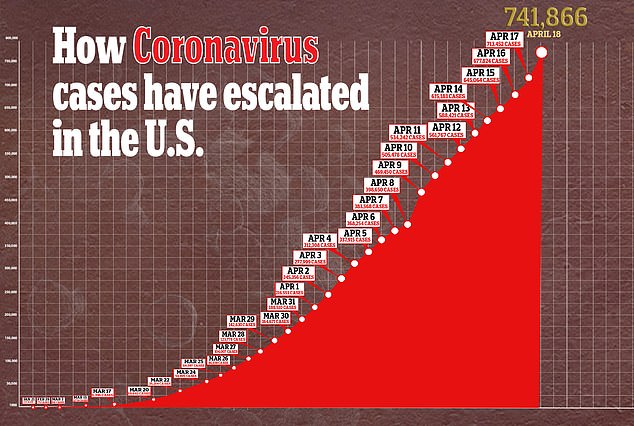