An X Factor finalist and a prolific burglar enjoyed a FaceTime chat between the ITV studios and the convict’s jail cell, it has emerged.

Anthony Russell who has reached the final of the world famous talent show spoke with Michael Trevillion – the criminal once dubbed ‘Merseyside’s most wanted’ – despite prisoners being banned from using mobile phones.

Trevillion bragged about the chat with Scouse singer Anthony, 28, in a screenshot the prisoner took on his phone, and then posted to Facebook.

Trevillion, 38, was using an account under the name John Smith, in a bid to avoid detection.

A Mirror source said claimed Anthony, from Liverpool, knew Trevillion from parties in their native Liverpool. 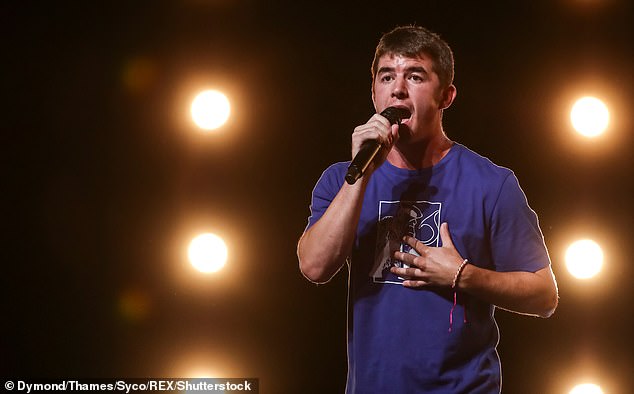 They added: ‘He set up a Facebook profile under a fake name so he can use it while in prison. He’s a well-known burglar in Bootle.’

However, friends of Anthony have denied there is a connection between the men.

The source told The Mirror: ‘This guy called out of the blue through Facebook Messenger and Anthony answered. Anthony had no idea that he was in prison using an illegal phone.’

Anthony will appear in the X Factor final at the SSE Arena, Wembley, this weekend.

Russell was given a hero’s homecoming as he arrived in his native Liverpool on Tuesday afternoon, meeting a crowd of excited fans at Albert Dock.

The singer has returned for his second shot at fame after quitting the competition in 2017 to enter rehab for drug use.