‘We just need to start games better!’: Xavi laments Barcelona’s inability to hit the ground running after their woeful home defeat against minnows Rayo Vallecano – and insists they missed a ‘golden opportunity’

Xavi lamented Barcelona’s lackadaisical start to the game against Rayo Vallecano after they fell to a third straight home defeat and left Real Madrid needing just a point next week against Espanyol to win La Liga.

‘We deserved more,’ said the Barça coach. ‘It’s true that in the first half we weren’t ourselves but in the second half we improved.

‘The ball just would not go in. It’s very similar to the game against Cádiz. Other teams are playing for their lives and we have to match the desire of our opponents.’

It was another game in which Barcelona had started poorly conceding after seven minutes.

‘There are games that get complicated because we don’t start as we should,’ said Xavi.

‘If you take the lead then you have everything under control. We don’t lack personality, we just need to start games better, it’s a shame because it was a golden opportunity.’ 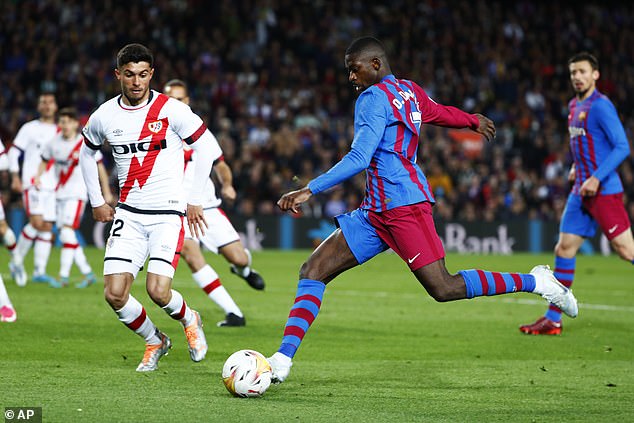 Gavi had a penalty shout late on after he was pushed by Alejandro Catena and the defender cleared off the line from Ousmane Dembele’s shot 10 minutes into injury time but Rayo could also have scored in the second half hitting the post on one counter attack.

‘I arrived in November and we were ninth,’ Xavi reminded everyone post-game.

Barcelona are still six points inside the Champions League places with five games left to play.

They now have just five games left to play this season – starting when they host Mallorca on Sunday.