China’s Communist Party leader Xi Jinping has unveiled the line-up of the party’s highest body who will rule alongside him as he embarks on a second five-year term as party leader.

As expected, Mr Xi was given a renewed mandate following the first meeting on Wednesday of the new Central Committee that was elected at the party’s twice-a-decade national congress.

The party elevated Mr Xi’s status by inserting his name and dogma into the party’s constitution alongside past leaders Mao Zedong and Deng Mr Xiaoping, cementing his status as the country’s most powerful leader in decades.

Xi Jinping (centre) with members of the Standing Committee

That move effectively makes any act of opposing him tantamount to an attack on the party itself, largely insulating him from competition among the party’s rival factions.

Mr Xi also continues to sit atop the seven-member Politburo Standing Committee, five of whose members were newly appointed on Wednesday.

The only other returning member was Premier Li Keqiang, the party’s second-ranking official primarily responsible for overseeing the economy and leading the Cabinet. Mr Li’s authority was widely viewed as having been undercut by Mr Xi’s accumulation of power over all sectors of government, although his continuing presence on the committee appears to speak to the high-regard in which he is held within the party. 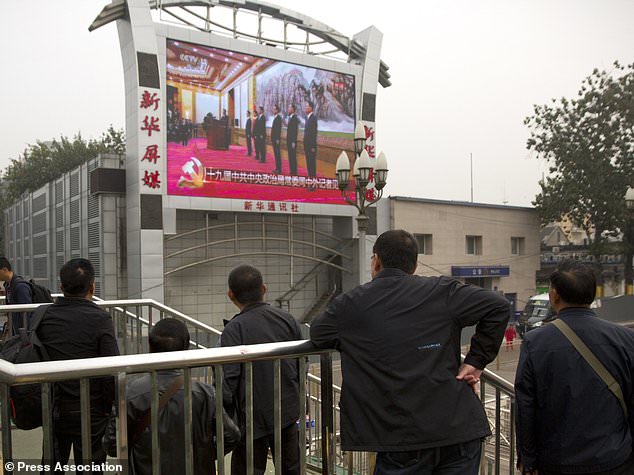 Residents watch the announcements in Beijing

The make-up of the committee reflects Mr Xi’s efforts to foster party unity by striking a balance between different interest groups in the 89-million member organisation as he seeks to better position a reinvigorated party to dominate China’s affairs at home and abroad.

They will assume responsibility for running the rubber-stamp legislature, the National People’s Congress and its advisory body, the Chinese People’s Political Consultative Conference, and assume a range of portfolios, including those responsible for propaganda, party discipline, ethnic and Taiwan affairs and science and technology. 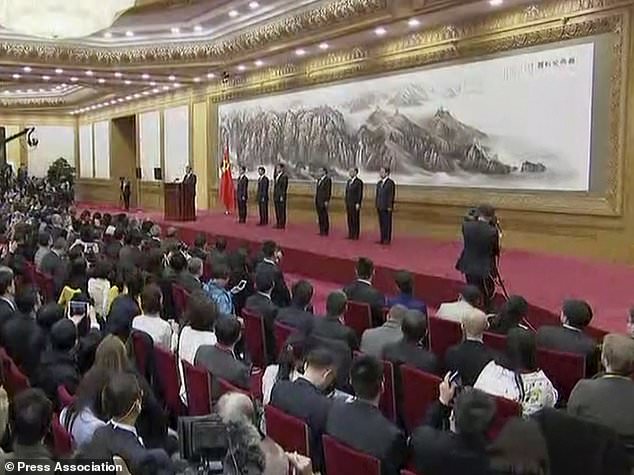 The Standing Committee is unveiled (AP)

Mr Xi has made his wide-ranging anti-corruption campaign the hallmark of his first five years in office. While popular among ordinary Chinese, it is seen as part of a drive to purge his rivals and political opponents and boost supervision over the party at all levels.

Alongside the campaign, Mr Xi has overseen one of the harshest crackdowns on civil society aimed at squelching dissent and activism among lawyers and rights advocates.

The new leaders will face challenges that include reining burgeoning levels of debt seen as the biggest threat to economic stability and managing trade tensions with Washington and Europe over China’s excess production of steel and other goods.