XPT traveller from Melbourne hotspot to Sydney has COVID-19 symptoms

Alarm as traveller is detained and quarantined after coming down with COVID-19 symptoms in Sydney after catching the train from Melbourne hotspot – and he faces an $11,000 fine

A traveller from one of Melbourne’s hot spots has come down with COVID-19 symptoms after catching the train to Sydney.

The man alighted an XPT train at Central Station after 7am on Saturday morning and was detained after showing ‘COVID-like’ symptoms.

Ambulance workers took him to an inner-city hotel to self-isolate.

The man could face an $11,000 fine or up to six months behind bars if he does not have a legitimate reason for crossing the border.

Passengers arriving in Sydney from Melbourne are having their temperatures checked upon their arrival at Central Station, above 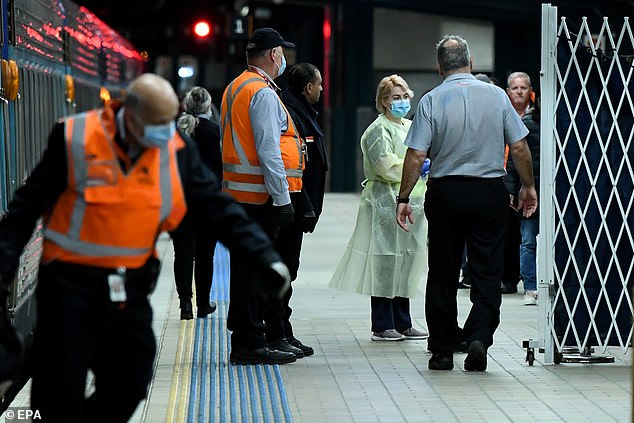 NSW Health staff wearing protective clothing have been monitoring XPT passengers as they arrive in Sydney, ever since swathes of Melbourne went into lockdown

Victorians from the state’s locked-down suburbs are banned from coming to New South Wales unless they are already a NSW resident or are seeking medical care.

Victoria reported 66 infections on Friday and is yet to provide Saturday’s numbers as 36 suburbs go into lockdown in Melbourne’s northern and western suburbs.

New South Wales reported six cases on Saturday, five of whom are in hotel quarantine and one school student from the NSW Central Coast.

Authorities said the case may be from a previous infection.