Yale to remove carving with gun pointed at Native American

Yale University said Tuesday it will remove a ‘problematic’ doorway stone carving that depicts a Puritan settler aiming a musket at a Native American after staff were slammed for covering it up.

Critics accused the Ivy League school in New Haven, Connecticut, of whitewashing history by putting temporary stone work over the gun, while others said the institution was being too politically correct.

This is the latest move by Yale to address racism in its complicated history.

In February, the university decided to rename Calhoun College because its namesake – 19th century alumnus and former U.S. Vice President John C. Calhoun – was an ardent supporter of slavery.

Yale had been under fire for decades for refusing to rename Calhoun College, with advocates insisting the name was racially insensitive.

A 1929 doorway carving depicts a Puritan settler (right) pointing a musket at the head of a Native American (left) at Yale University’s campus in New Haven, Connecticut 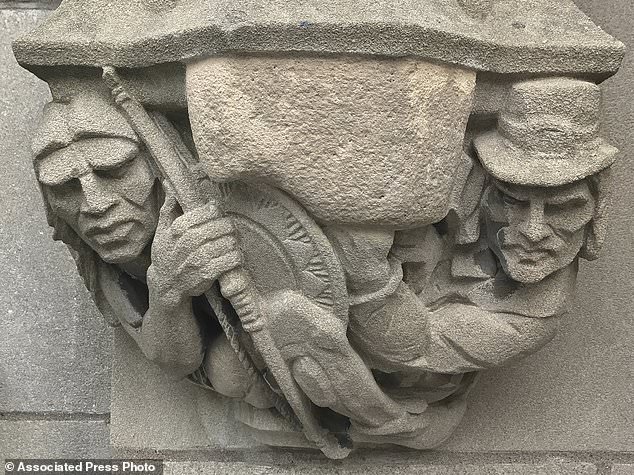 The stone carving soon will be moved to another location, but it will be made available for public viewing and study, Yale officials said.

The temporary stonework covering the musket will be removed after the relocation.

The temporary stonework will be removed because Yale believes that universities have an obligation to students and should not erase history.

‘We cannot make alterations to works of art on our campus,’ Yale President Peter Salovey said in a statement. ‘Such alteration represents an erasure of history, which is entirely inappropriate at a university. We are obligated to allow students and others to view such images, even when they are offensive, and to study and learn from them.’ 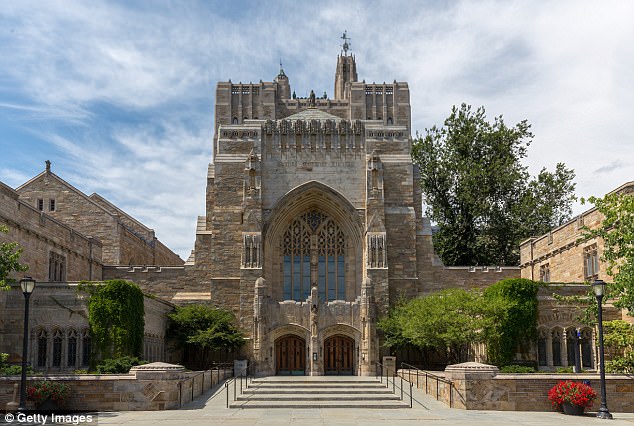 The carving was at a rarely-used entrance to Sterling Memorial Library (pictured). The door was recently made into the main entrance for the new Center for Teaching and Learning

School officials said Tuesday that the decision to cover up the musket was made before Yale adopted new principles in December that were developed while deciding policy on renaming buildings.

A school statement said Yale has an obligation ‘not to hide from or destroy reminders of unpleasant history.’

The stone carving was created for an entrance to Sterling Memorial Library when the building was constructed in 1929. The entryway had been seldom used for years, but recently was made the main entrance for the new Center for Teaching and Learning.

When the library was being renovated for the new center last year, school officials in charge of the project decided to cover up the musket after consulting with Yale’s Committee on Art in Public Spaces. Yale also consulted faculty and experts, who concluded the carving depicted a scene of warfare and colonial violence against Native Americans.

Yale officials said the project leaders ‘determined that leaving the depiction in place would have the unintended effect of giving it a place of honor that it does not deserve.’

‘Covering over the problematic aspect of this carving is not consistent with the principles subsequently adopted by the university,’ officials said in a statement. ‘Therefore, when the carving is relocated, the covering stonework will be removed.’

Leaders of the student-run group Association of Native Americans at Yale did not return messages seeking comment Tuesday.