The Yale community has thrown out its alumni pride to protest the Supreme Court nomination of law school alumnus Brett Kavanaugh, a day after fellow Ivy League graduates Ronan Farrow and Jane Meyer published a bombshell new report that included a new sexual misconduct claim against him.

Faculty members at the nation’s most selective law school cancelled classes Monday as students demonstrated in Washington DC and several others staged sit-ins at the widely-liberal university.

Dozens of revelers were pictured outside the office of Democratic Senator of California, Dianne Feinstein and Republican Senator of Maine, Susan Collins, as they angrily protested Donald Trump’s Supreme Court pick.

Protesters donned black shirts with white lettering that said: ‘Be A Hero’ as well as signs that said, ‘Women Demand Justice’  and ‘Susan Collins Vote No Or we will fund your future opponent.’

Police were seen monitoring the rowdy crowd and even placing several people in handcuffs.

A group of protesters against Supreme Court nominee Brett Kavanaugh hold a banner that reads ‘Be A Hero’ outside offices of Senator Susan Collins, R-Maine on Capitol Hill in Washington, Monday, September 24, 2018 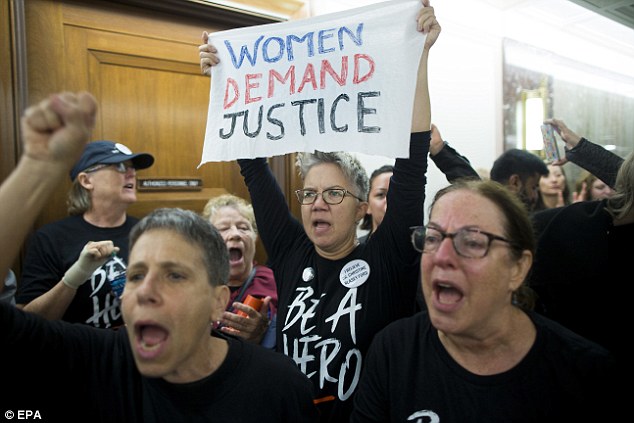 Protesters donned black shirts with white lettering that said: ‘Be A Hero’ as well as signs that said, ‘Women Demand Justice’ 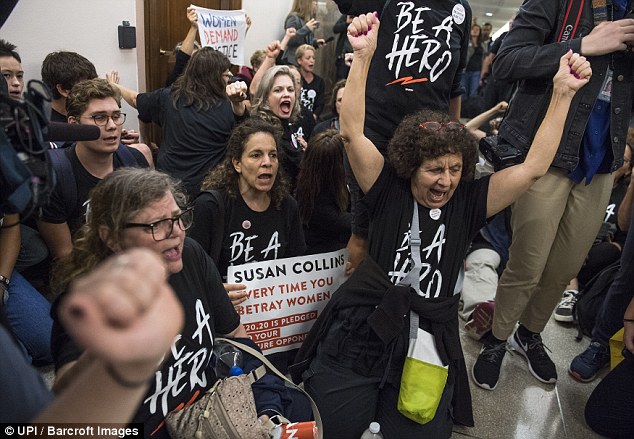 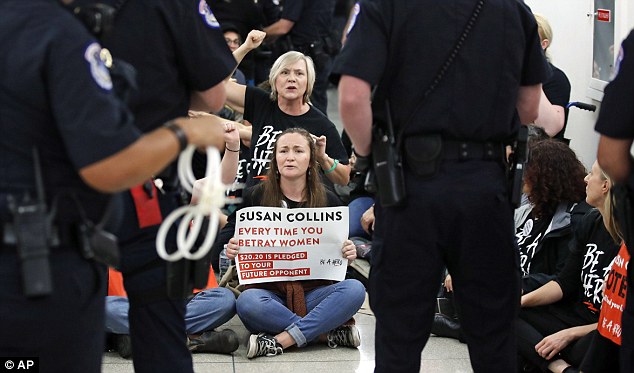 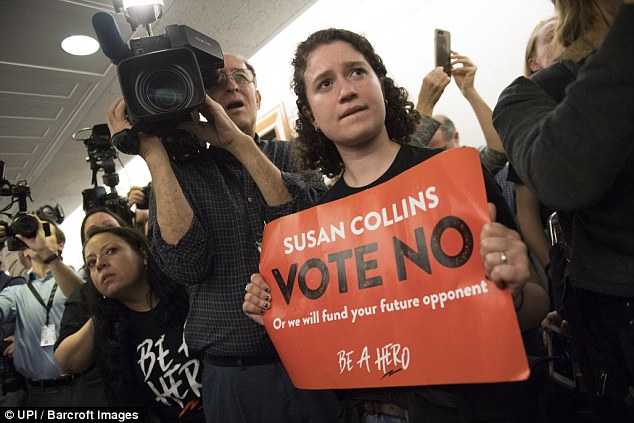 Another sign at the rally said ‘Susan Collins Vote No Or we will fund your future opponent.’ 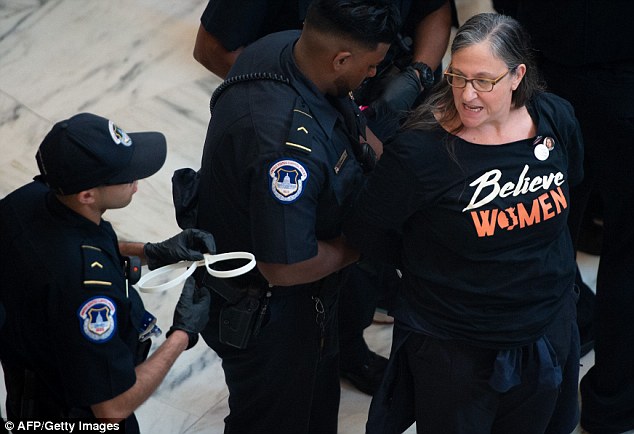 US Capitol Police arrest a demonstrator during a protest against the nomination of Judge Brett Kavanaugh to be a Supreme Court Justice on Capitol Hill in Washington, DC on September 24, 2018 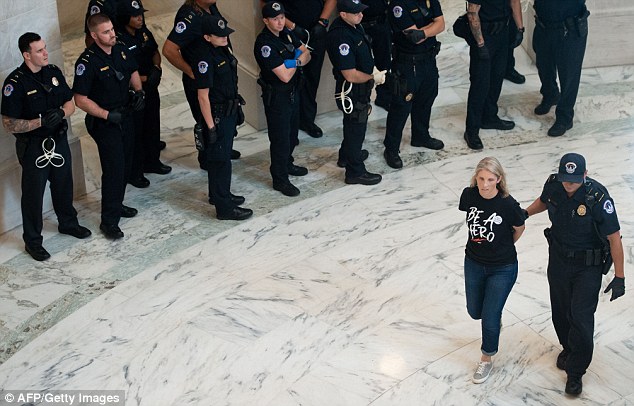 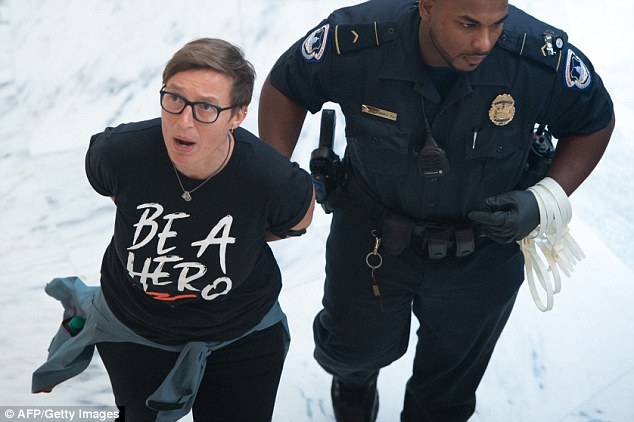 Another protester is seen being placed in handcuffs during the Monday demonstration in Washington, DC T 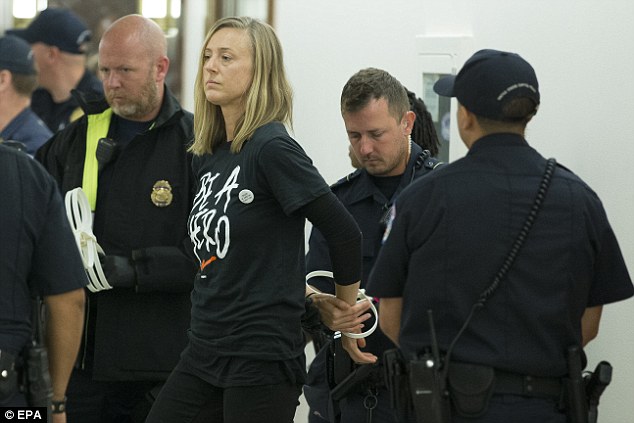 he protests followed a bombshell Sunday report by the New Yorker which included a new allegation from one of Kavanaugh’s former colleague’s at the prestigious university, Deborah Ramirez. 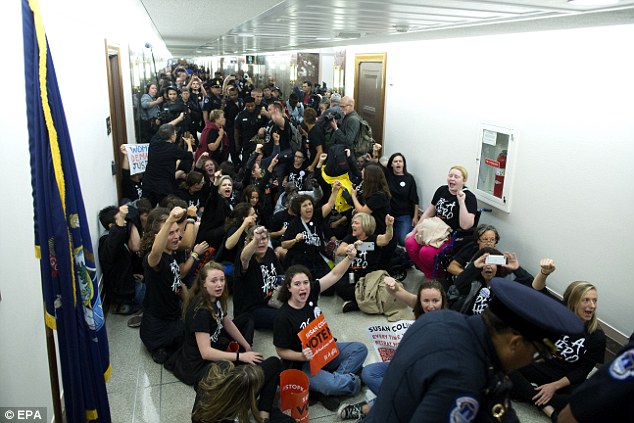 The protests followed a bombshell Sunday report by the New Yorker which included a new allegation from one of Kavanaugh’s former colleague’s, Deborah Ramirez, at the Ivy League university.

Ramirez claims Kavanaugh exposed his penis to her at a party in the early 80’s when they both attended Yale.

The attack against Kavanaugh mimics that of Supreme Court Associate Justice Clarence Thomas – who came under fire by Mayer during her time at Wall Street Journal. Thomas was accused of sexual harassment by his former employee, Anita Hill, in the early 90’s.

The law school also has turned against Yale professor Amy Chua, a Kavanaugh supporter, after she denied allegations that the nominee told female clerks to dress provocatively for interviews with him. 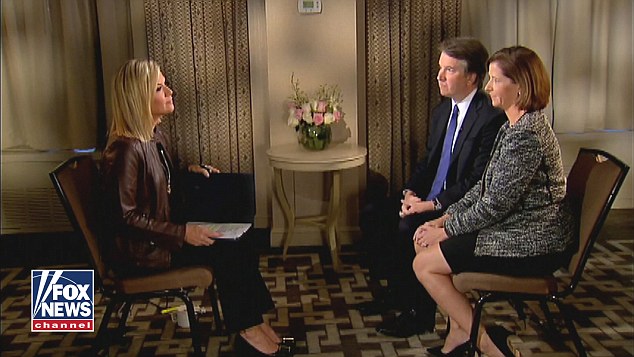 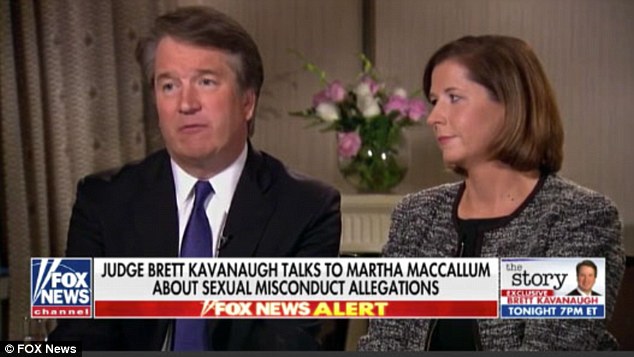 Yale Law School is known to be widely intolerant of conservatives in its faculty.

More than 1,300 women from the Yale community signed a letter Monday in support of Ramirez, some of whom said they were also survivors of sexual assault.

The letter said: ‘As women of Yale, some of whom are ourselves survivors of sexual assault, we stand behind Deborah Ramirez, Yale ’87, and with Dr. Christine Blasey Ford.

‘We are coming forward as women of Yale because we have a shared experience of the environment that shaped not only Judge Kavanaugh’s life and career, but our own. We are committed to supporting all women who have faced sexual assault, not only at Yale, but across the country.

‘Ramirez has made allegations against Judge Kavanaugh about an incident that took place when both were students at Yale.

‘We commend her courage in coming forward. We ask that she be afforded respect and security to protect her privacy, quality of life, and emotional stability.

‘We demand that her allegations be thoroughly investigated and that she be treated with fairness, and given an opportunity to tell her story.

‘We also demand that the Senate Judiciary Committee delay any vote on Judge Kavanaugh’s nomination to the United States Supreme Court until all allegations against him have been investigated, all witnesses have testified under oath, and his nomination has been thoroughly vetted.’

The Yale Daily News even exposed Kavanaugh’s wild antics during his time with the university’s Delta Kappa Epsilon fraternity.

This includes Kavanaugh’s part in a shameful all-male club called ‘Truth and Courage’ – otherwise referred to as the ‘T*t and Cl*t’ club.

Former Yale student Kristin Sherry told Buzzfeed News that TNC was different from other sororities and fraternities that ‘looking for a prestigious family background, or your GPA.’

Sherry said TNC was mostly ‘organized around having sex with coeds.’

Kavanaugh launched an all-out bid to save his nomination and blasted the ‘smears’ against him Monday.

He sat down for a joint interview with Fox News alongside his wife, Ashley, where he directly took on sexual assault accusations by a two women that date back decades. 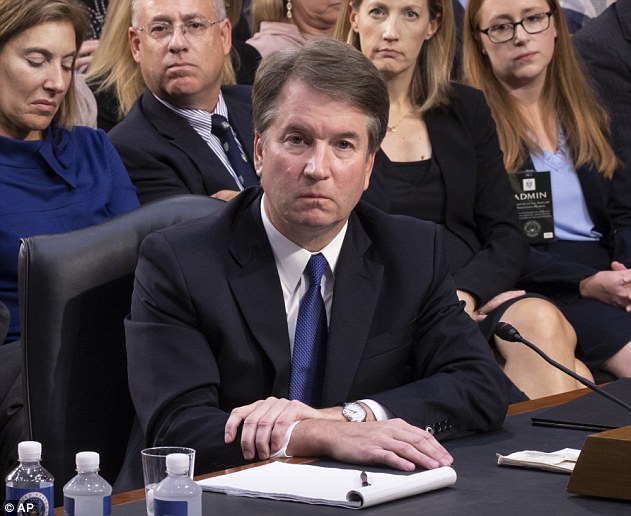 Following allegations by a woman who claims he exposed himself to her at a Yale University party, Kavanaugh released a statement saying: ‘This alleged event from 35 years ago did not happen. The people who knew me then know that this did not happen, and have said so. This is a smear, plain and simple’

‘What I know is the truth, and the truth is I’ve never sexually assaulted anyone,’ Kavanaugh told Fox News’ Martha MacCallum.

In another excerpt of the interview released before it aired, Kavanaugh said he was a virgin in high school and ‘many years thereafter.’

Montgomery County investigators are aware of an anonymous witness who has made allegations about Kavanaugh dating to his senior year in high school.

Following the new allegation Sunday. Kavanaugh released a statement saying: ‘This alleged event from 35 years ago did not happen.

‘The people who knew me then know that this did not happen, and have said so. This is a smear, plain and simple.’ 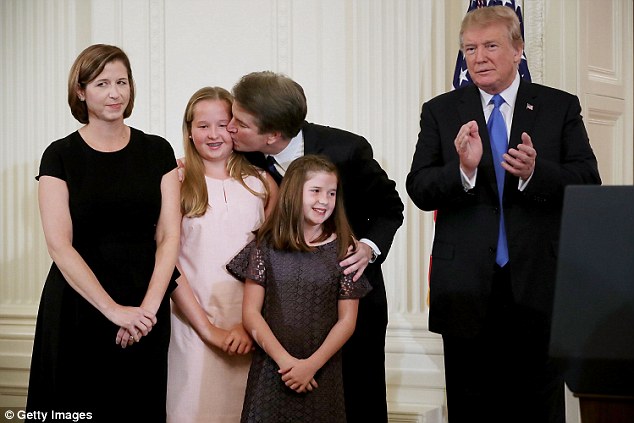 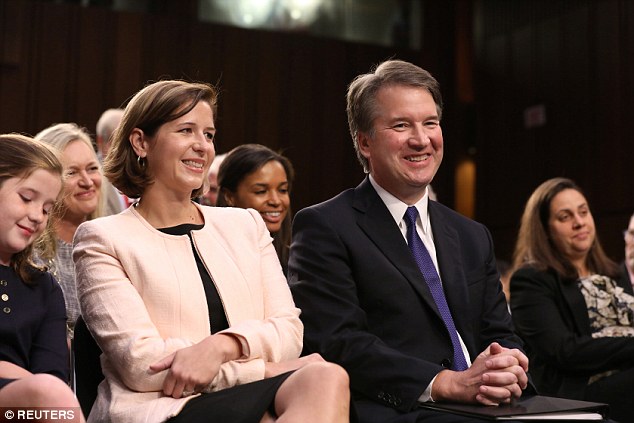 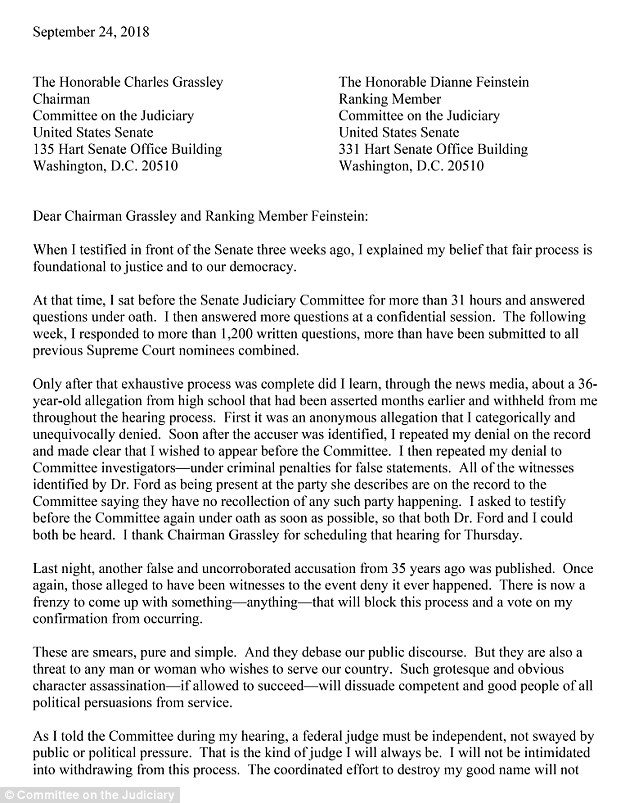 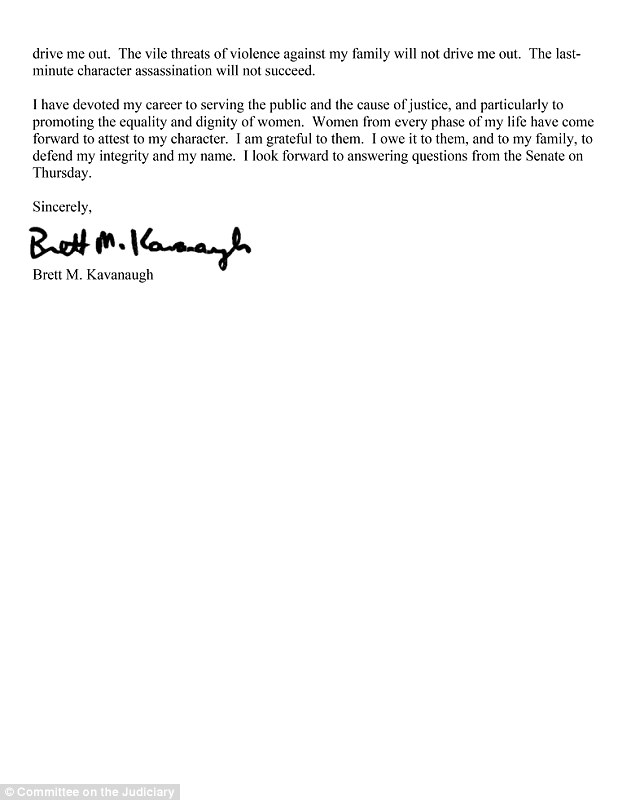