Yassmin Abdel-Magied has blasted Australian ‘white men’ politicians involved in the leadership spill, accusing them of not taking their job seriously and ‘taking the p***’.

The Muslim activist, who was a guest on Channel Ten’s The Project to discuss her recent speech at the Melbourne Writers Festival, couldn’t resist speaking her mind when the issue of politics came up.

When asked how she felt about the recent chain of events that saw Malcolm Turnbull resign as Prime Minister, Abdel-Magied said she found the whole situation ’embarrassing’.

Yassmin Abdel-Magied (pictured) has blasted Australian ‘white men’ politicians involved in the leadership spill, accusing them of not taking their job seriously and ‘taking the piss’

‘Lols, lols. Like honestly, they are taking the p***,’ she told the hosts.

‘Like genuinely, it’s like the Australian politicians are playing some sort of game in their own world and not really taking seriously the fact that they are running a country, and it’s honestly offensive.’

The Sudanese-Australian said that she thinks Australians deserve better from their politicians and government.

‘I think it’s really embarrassing for them,’ she said. ‘Also, if anyone ever says to me that like women can’t do something or like people of colour aren’t able to do something, I’ll be like right is this the best that you white men have.

‘Don’t come at me with chat about merit or quotas because it’s a pretty low bar.’

Abdel-Magied’s fired-up comments not only revved up audiences but also social media, with some people sharing their thoughts on Twitter.

‘As always Yassmin is amazing. I just can’t get over how badly she was treated, and now we’ve lost a highly talented & inspiring Australian to the UK,’ one person wrote.

Another person said: ‘is this the best white men can do’ ‘people of colour’ You are a racist, plain and simple. Secondly you have a giant chip on your shoulder.’ 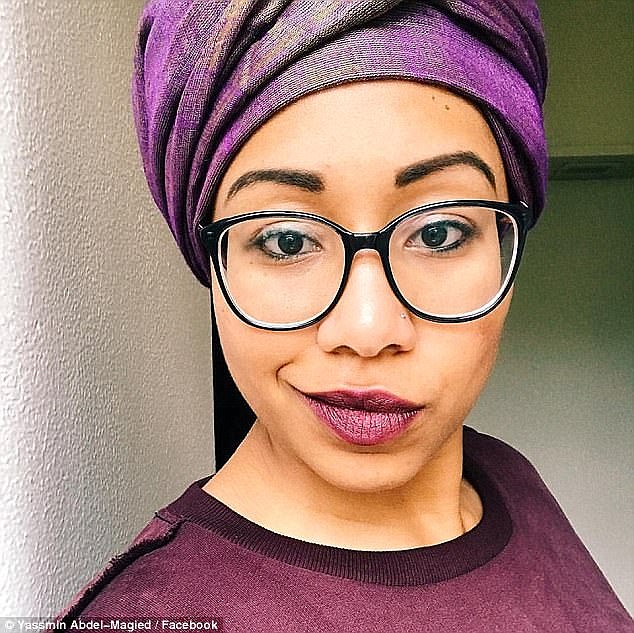 The former Queensland Young Australian of the Year who was born in Brisbane was in Australia to present her speech, titled, ‘Eulogy for My Career’, which details the backlash she said she faced after losing her job in Australia.

The 28-year-old engineer, writer and TV presenter moved to the UK in mid 2017 after she lost her job in the wake of a series of controversies, including a tweet that she posted that read, ‘LEST.WE.FORGET. (Manus, Nauru, Syria, Palestine…)’

She also made headlines for a number of headline for her heated conversation about Sharia Law with former Tasmanian senator Jacqui Lambie on Q & A.

In an edited version of her speech presented at the Melbourne Writers Festival, Abdel-Magied described the written words as a ‘eulogy’ of her past self.She said she felt as though she had ‘lost an innocence’ she was unaware of at first.

The 28-year-old moved to the UK in mid 2017 in the wake of a series of controversies, including a controversial tweet