After announcing his retirement from football, Yaya Toure will end his career laden with trophies from spells at Barcelona, where he won the Champions League and two La Liga titles, and Manchester City, where he won three Premier Leagues.

The Ivory Coast powerhouse, however, also leaves the game with the best perfect penalty record in the Premier League.

He has converted all 11 of his efforts for Manchester City in the league, and all three in cup competitions.

11 – Yaya Touré scored all 11 penalties he took in the Premier League, the best 100% record in the competition’s history. Reliable. pic.twitter.com/UiRjJik4Ez

Those 11 were part of 79 goals in 316 games for Manchester City, during eight successful seasons in the north East.

Despite joining the club in August 2010, Toure’s first penalty for Manchester City – and first in club football – came in a 3-2 win at West Brom on December 4 2013.

That was the first of six successful penalties during the title-winning 2013/14 campaign, in which he scored 24 goals from 49 games in all competitions.

Toure did not take a single, competitive spot-kick in normal time for any other club aside from Manchester City.

His first recorded penalty was a successful one for Ivory Coast in a 4-2 win at Tanzania in June 2013. 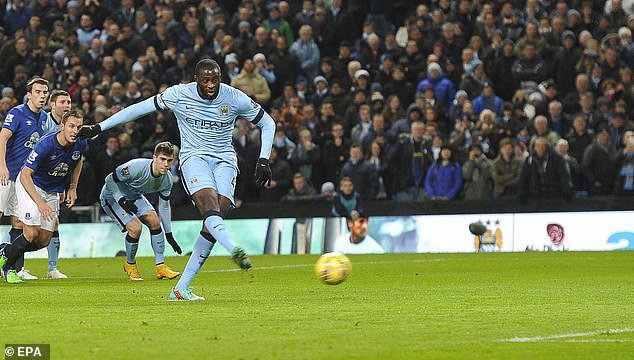