Yoga has been called ‘absolutely incompatible’ with the Christian faith by the Greek Orthodox Church and frown upon people using it to combat coronavirus quarantine stress.

The church’s Holy Synod, made up of the patriarch and senior bishops, announced on Wednesday that yoga had ‘no place in the lives of Christians’, as it is a fundamental part of the religion of Hinduism.

The church urges Orthodox Christians to avoid practising yoga, after millions of people have turned to the activity to combat stress and keep fit indoors amid the coronavirus lockdown. 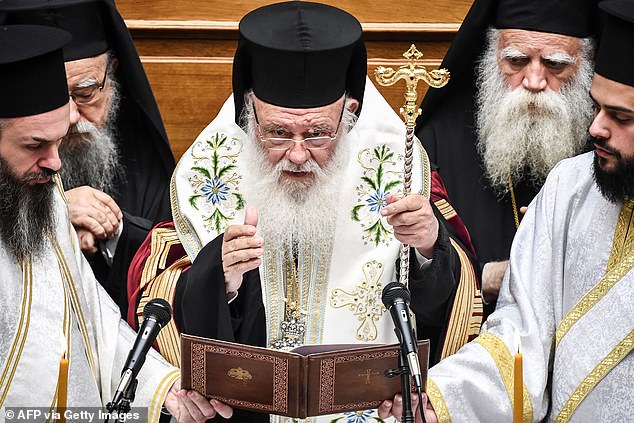 The decision was taken during a meeting of the Standing Holy Synod, chaired by Archbishop Ieronymos of Athens (pictured centre during a parliament swearing in ceremony in 2019)

‘Yoga is absolutely incompatible with our Orthodox faith and has no place in the life of Christians,’ the Holy Synod, the governing body of the Church of Greece said in a statement.

‘It is a fundamental chapter in Hindu religion… it is not a ‘kind of physical exercise’,’ it said.

The decision was taken during a meeting of the Standing Holy Synod, chaired by Archbishop Ieronymos of Athens on Tuesday.

The church decided to intervene after ‘various news media’ recommended yoga as a means to ‘combat stress’ during the coronavirus pandemic.

This is not the first time that the Greek Orthodox Church has taken issue with yoga, with the Reverend Metropolitan Nektarios of Argolis voicing of its ‘dangers’ last year,  the Times reported.

He held an event where he told the crowd it was ‘wrong’. He said: ‘We make a confession to God. This is the same thing that people do during yoga.’

The Church of Greece had already officially decreed in June of 2015 that ‘the practice of yoga has no place in the lives of Christians’ – the same reasons it gives again now. 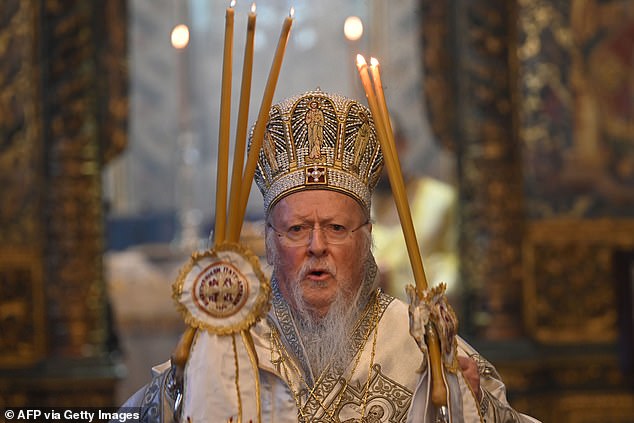 The Ecumenical patriarch Bartholomew I, spiritual leader of the Greek Orthodox Church, pictured leading the Easter ceremony behind closed doors amid the coronavirus lockdown 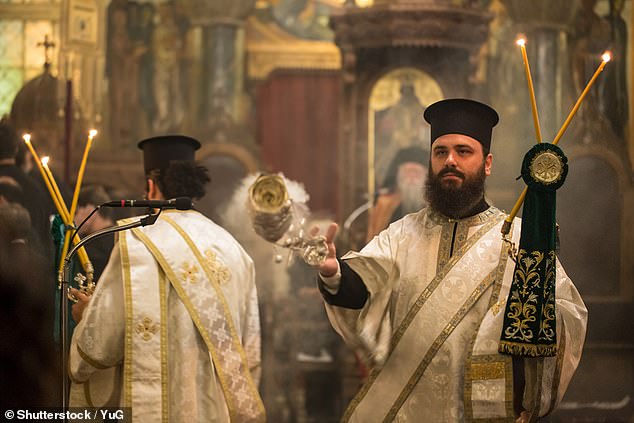 The Church of Greece had already officially decreed in June of 2015 that ‘the practice of yoga has no place in the lives of Christians’ (pictured, a mass in a Greek Orthodox Church in Athens in 2015)

Around 300million people practise yoga across the world, according to the International Yoga Federation.

But there is debate about whether yoga is an intrinsically Hindu activity, with some insisting that it is, as it uses spiritual elements including sun salutations, which originate from a ‘salute’ to the Hindu sun god Surya.

But a Californian court in 2015 argued it should be allowed in a school physical education programme, as the practise is not religious if the yoga instructor does not consider it to be.

The Church of Greece also called upon the clergy to abstain from any event organised by the Rotary and Lions international organisations, The Greek Reporter said.

The circular argued that these groups do not limit their actions to social events, but also include religious acts, including the organisations’s rite of passage for new members and its use of pray addressed vaguely to a God.

It also informed Orthodox Christians about a new Protestant group, the ‘Hellenic Missionary Union’, and its proselytising – or converting – methods. 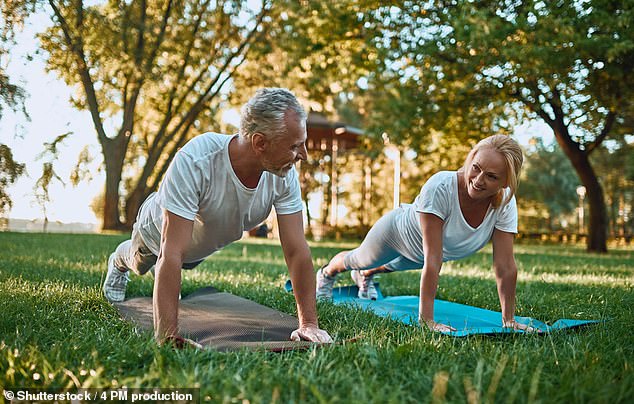 Around 300million people practise yoga across the world, according to the International Yoga Federation (file image)

The circular said: ‘Orthodox Christians as members of the Church, of the one and only Body of Christ, do not need various neo-heretical movements, nor their various preachers from within or outside Greece, and remain faithful to the Gospel of Jesus Christ, as it was originally delivered by the Holy Evangelists and interpreted by the Holy Fathers of our Church.’

This Church of Greece’s decision comes after it sparked criticism early on in the pandemic by insisting that the coronavirus does not spread via Holy Communion.

‘The Sacrament of the Eucharist remains non-negotiable, as we have been taught by the teaching of the Orthodox Tradition and the Holy Fathers of our Holy Church,’ the Holy Synod said in a statement.

The Orthodox Church is one of the most powerful institutions in Greece, with influence in politics and justice, and actively tries to avert perceived proselytising by other religions.

In May, Greece began loosening coronavirus lockdown restrictions imposed across the country in March.

So far the country has come out relatively well compared to other EU states, with fewer than 180 deaths in a population of 11million.