A teenager who gatecrashed an 18th birthday party and stabbed the 19-year-old who asked him to leave has been warned to expect a ‘significant’ prison sentence.

Sheryar Newaz, 19, was just 17 years old when he stabbed his victim and left his intestines hanging out of his abdomen.

A Hull Crown Court jury took five and a half hours to find Newaz guilty of wounding with intent after his victim described the ‘gruesome’ sight of his own intestines leaving his body when he was stabbed near Pocklington, Yorkshire, on Halloween 2017.

Sheryar Nawaz, 19, stabbed his victim in the abdomen after he asked him to leave the 18th birthday party in Pocklington, Yorkshire

He threw up in the ambulance on the way to the hospital as he watched the ‘yellow, fatty tissue’ of his intestines ‘come out even more and more’, the victim told the jury.

He spent a week in hospital and had major bowel surgery.

Nawaz stood in the dock and showed no emotion as the foreman of the jury announced the guilty verdict by a majority of 10 to two – although sobs could be heard from the public gallery.

His barrister, Abdul Iqbal QC, did not ask for more time for a probation service report but the judge ordered the report due to Nawaz’s age when he committed the crime. 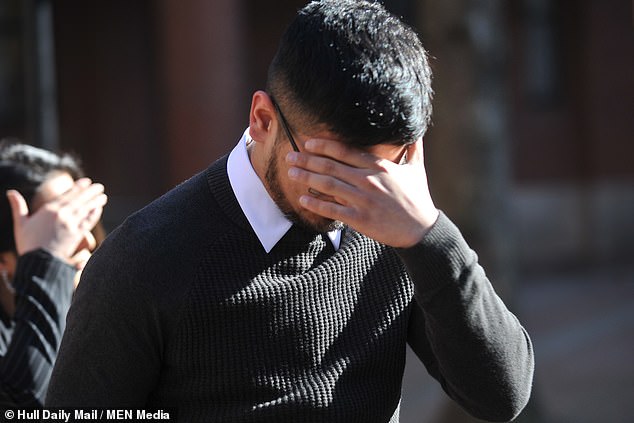 Nawaz had told the jury he was asked to go to the party, at a detached house near Warter, by two friends, one of whom had been invited by a girl. Prosecutors described Nawaz wearing ‘bling’, including a silver chain around his neck

‘You have been convicted of wounding [the victim] unlawfully with the intent of causing him grievous bodily harm. A serious aggravating feature here is that you took a knife to a party.

‘The result of this, unfortunately for you, is a significant sentence of imprisonment.

‘But because you are 19 now and you were only 17 at the time, and you have no record and I have heard something about you in the trial to suggest you have a positive character, it wouldn’t be fair to you, in my view, to sentence you without a report prepared by the probation service.

‘But you must understand that the consequences of this conviction are that only a sentence of immediate imprisonment, or custody in your case because of your age, is going to be passed. In the circumstances your bail is revoked and you are remanded into custody. Go with the dock officer please.’

The judge then thanked the jury for their service, calling it a ‘harrowing’ case.

The victim had been one of about 100 guests aged between 15 and 19 who all had connections to Pocklington school.

Nawaz had told the jury he was asked to go to the party, at a detached house near Warter, by two friends, one of whom had been invited by a girl.

The victim said the three men from Hull stood out because they ‘were all wearing tracksuits’, while everyone else wore ‘smart, casual clothing’.

Prosecutors described Nawaz wearing ‘bling’, including a silver chain around his neck.

The victim said he and another guest were asked to tell the men to leave after rumours surfaced they were carrying knives. 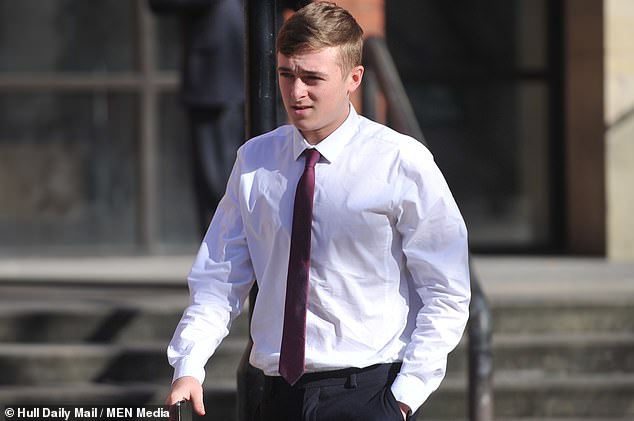 Co-defendant Kieran Mortimer, 18, of Worcestor Road, west Hull, had earlier been found not guilty of affray by unanimous verdict

He said he felt ‘a lot of pain’ and ‘looked down, lifted my T-shirt and saw a lump of yellow, fatty tissue hanging out’. He said he was ‘very lucky’ the host’s father, a doctor, was there because ‘I literally thought I was going to die’.

The victim threw up in the ambulance after seeing his intestines ‘come out even more and more’. He identified Nawaz on Facebook the day after his operation.

Co-defendant Kieran Mortimer, 18, of Worcestor Road, west Hull, had earlier been found not guilty of affray by unanimous verdict.

A third defendant, Rami Omar, 21, who arrived at the party later, was found not guilty of affray earlier in the trial on the directions of Judge Bury.

Almost at the same time the verdicts were being delivered, police in London announced the death of a teenager in West Kensington, who was found with multiple stab wounds to the chest.

Another man also died on Thursday from wounds suffered during a knife attack in the capital on Sunday.