Yorkshire residents use angle grinder to cut down security camera

A vandal armed with an angle grinder has been filmed cutting down surveillance cameras on a crime-hit estate – a day after they were installed.

The two-minute video captured on a mobile phone and shared on Facebook shows a crowd watching the man as he cuts through a lamp post to which the cameras have been fitted in West Yorkshire.

Cheers go up from the watching crowd as the post crashes to the ground, smashing the expensive video equipment and the light.

The video, posted on Wednesday, is said to have been taken on Bradford’s notorious Holme Wood estate.

Police are investigating the incident, as the area has been described as being overrun with ‘Mad Max, anti-social and aggressive kids’ by locals.

A vandal armed with an angle grinder was filmed cutting down surveillance cameras on a crime-hit estate in West Yorkshire, a day after they were installed. The video was posted to Facebook on Wednesday night

The video caption on Facebook says: ‘Taking down cameras in holmewood only been up a day!’

And a voice on the film shouts ‘Holme Wood’ as the camera smashes to the ground.

As the cameraman records the crime he shouts: ‘Someone’s chopping t’cameras down.’ Another witness adds: ‘Naughty b******s.’

Cars then struggle to drive past the wrecked pole that crashed onto the street below.

Video surveillance equipment is bought and monitored by local councils with evidence of wrong-doing passed to police.

The incident took place on Broadstone Way at around 10.20pm on Wednesday night outside Holme Wood Library.

Councillor Alan Wainwright told local paper the Telegraph and Argus he was ‘absolutely appalled’ by the incident.

He said: ‘I have spoken to police and I am demanding these people are brought to book.

‘The CCTV was put up at lunchtime yesterday, and in fact when the workmen were putting the cameras up they were threatened by a young lad and the police were involved then.’ 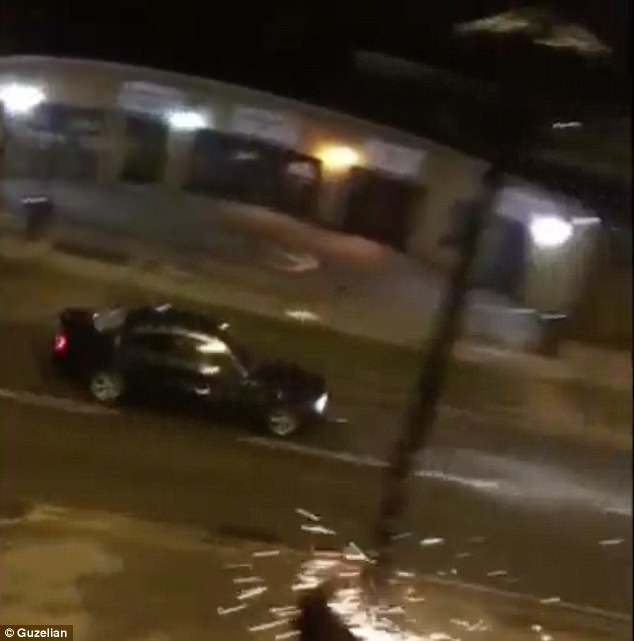 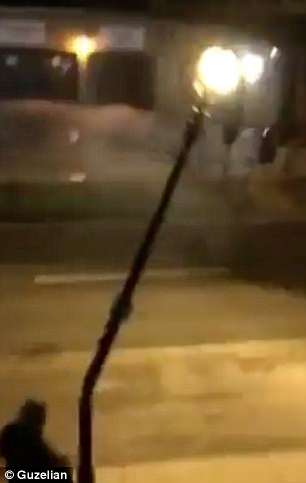 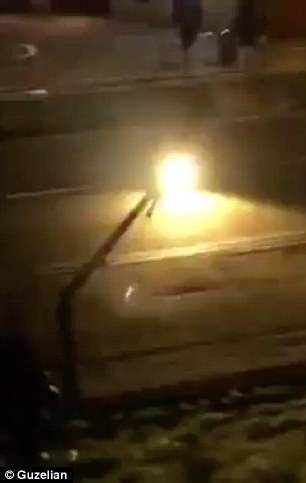 Cheers go up from the watching crowd as the post crashes to the ground, smashing the expensive video equipment and the light on Bradford’s notorious Holme Wood estate

He continued: ‘Police have been involved from it being erected to it being chopped down.

‘The cameras were put up in case of any incidents to try and catch whoever was involved on film.

‘This is a serious incident, the police need to catch the people involved and the bystanders who watched it and make sure they get the appropriate action.

‘I am insisting this, people cannot just come along and do thngs like that, there must be consequences and this sort of behaviour cannot continue.

‘This sort of behaviour is happening right across Bradford South at the moment, there are problems all over the area with youths.’

A West Yorkshire Police spokesperson said: ‘Police were called around 10.25pm on March 28, to Broadstone Way in the Holme Wood area of Bradford following a report that CCTV camera had been damaged.

‘On arrival, it was found that a recently erected CCTV camera had been cut down.

‘Enquiries into the incident and to trace those responsible are very much ongoing.’ 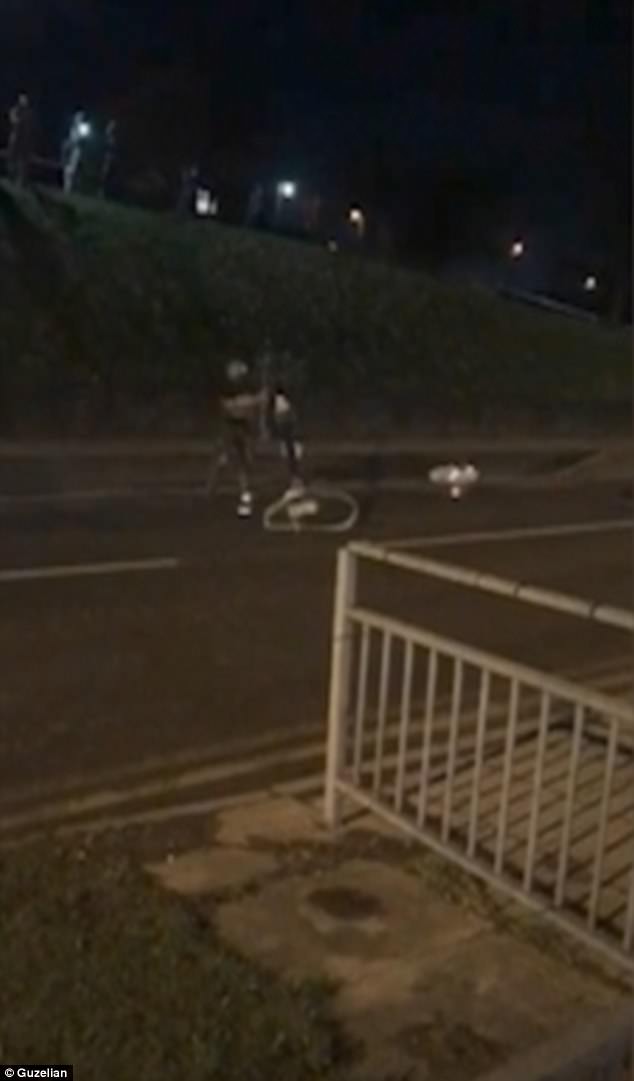 Another witness filmed the incident from across the street. The pole fell in the middle of the road, causing cars to struggle to drive past it 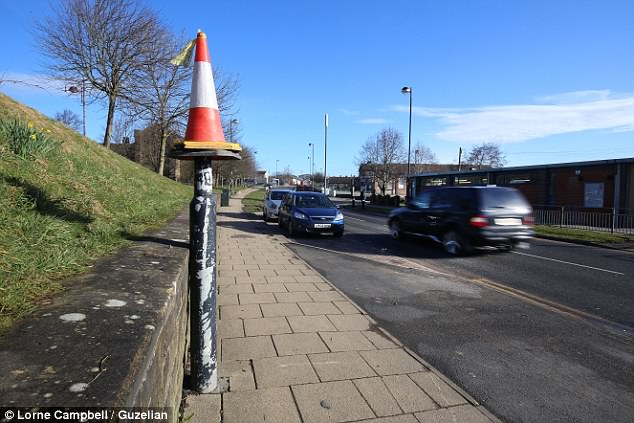 Police are investigating the incident, as the area has been described as being overrun with ‘Mad Max, anti-social and aggressive kids’ by locals

The video has been watched more than 70,000 times, shared more than 1,500 times and more than 440 people have commented on the nearly two minute clip.

Facebook users who commented on the shocking vandalism pointed out that the tax payer will be picking up the bill.

Most of the viewers who left comments were upset by the video, calling the behaviour ‘disgusting’ and were outraged that no one tried to intervene.

One said: ‘Criminal damage tax payer will pay out yet again.’

Another said: ‘Don’t get how people are finding this amusing… your as low as them if you find this even remotely funny. They could have killed someone.’

Yet another added: ‘When residents ACCEPT crime house burglaries car thefts vandalism by this lot who live on the same estate they are cutting the camera down so they can break in ur house steal ur kids toys and smash ur cars up and trash the estate you call home.’

A former resident weighed in, saying: ‘And they be the 1s that end up stealing cars racing and killing somebody glad I moved away from that estate years ago just gone to the dogs.’ 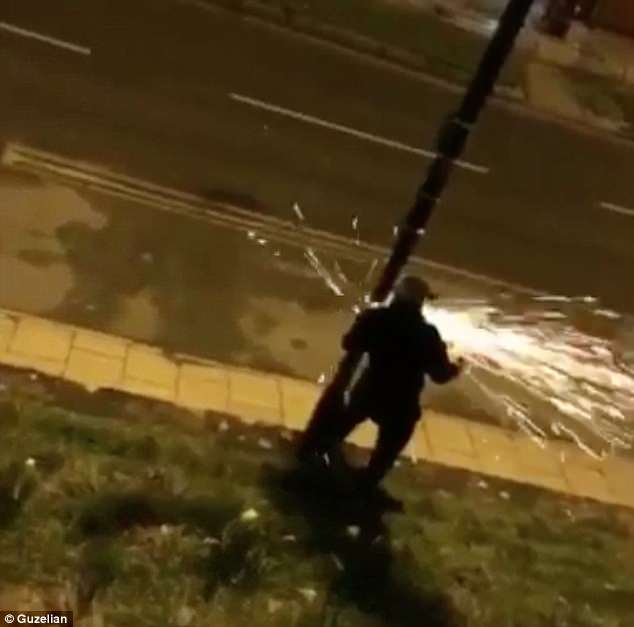 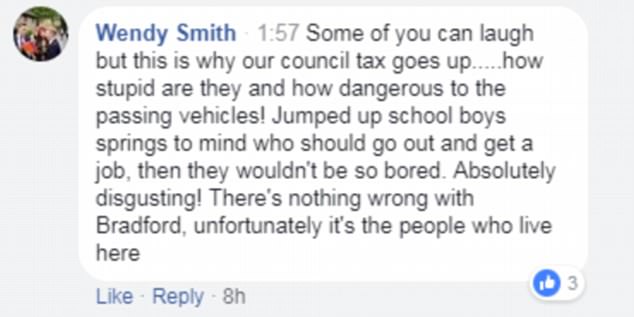 Holme Wood is one of the most deprived areas of Bradford and was once labelled a no-go area by minicab drivers because of attacks on cars and robberies by yobs.

‘It’s anti-social and aggressive kids with nothing better to do. They’re hooligans. It’s like the return of Mad Max,’ one driver said at the time.

Statistics revealed that more than 300 crimes were reported in the area in January alone.

Last year, council members and local police teamed up to help rid the estate of crime and anti-social behaviour.

Earlier this month, there was a targeted shooting in the area that was eventually linked to aggravated burglaries, property and vehicle damages.