You can make yourself more intelligent with brain training

The brains of clever people really are wired differently, according to new research.

It allows them to absorb important facts quickly – while blocking out irrelevant information, suggests the study.

Scientists used MRI scans on more than 300 volunteers to shed light on the nature of intelligence. They had already identified areas of the brain that control IQ – and now they have uncovered the mechanism behind it.

It could even be possible for people to make themselves more intelligent with brain training games, for instance, say researchers.

Challenging tasks may help in the development of networks in the brain – encouraging different parts to interact.

The breakthrough could lead to major new understandings of how the human brain works – and Alzheimer’s disease and other neurological disorders.

Psychologist Dr Ulrike Basten from Goethe University Frankfurt and her colleagues found regions interact more closely in brainy individuals – while others ‘de-couple’, or disconnect, themselves.

In more intelligent people, certain regions are clearly more strongly involved in the exchange of information between different ‘sub networks’ of neurons.

This enables important information to be communicated faster, and more efficiently.

On the other hand, the researchers also identified areas that are disconnected, or ‘de-coupled’, from the rest of the brain in brighter people.

They believe this results in better protection against distracting and irrelevant material.

Dr Basten said: ‘We assume network properties we have found in more intelligent persons help us to focus mentally and to ignore or suppress irrelevant, potentially distracting inputs.’

The causes of these associations remain an open question at present, suggesting it may be possible for people to become brainy.

‘It is possible that due to their biological predispositions, some individuals develop brain networks that favour intelligent behaviours or more challenging cognitive tasks,’ said Dr Basten.

‘However, it is equally as likely that the frequent use of the brain for cognitively challenging tasks may positively influence the development of brain networks.

‘Given what we currently know about intelligence, an interplay of both processes seems most likely.’ 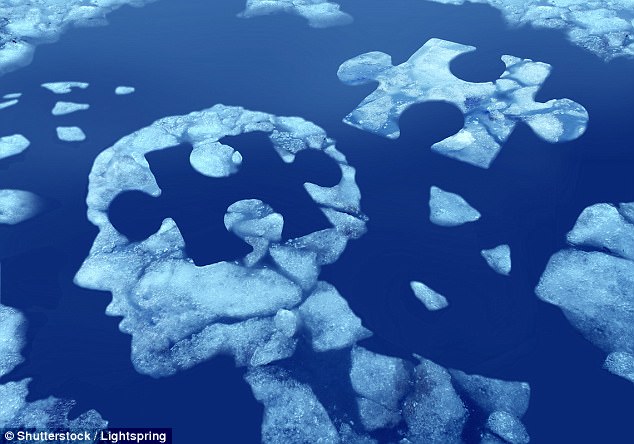 Her findings back previous theories that smart thinking requires various portions of the brain working together like different parts of an engine.

The nature of intelligence has been debated for more than a century, with many questions remaining unanswered even now.

Principle investigator Dr Basten said understanding the foundations of human thought is fascinating for both scientists and laypersons alike.

Differences in academic success and professional careers are attributed to a considerable degree to cognitive abilities.

The study, published in the journal Scientific Reports, shows these are rooted in the patterns of integration among parts of the brain called ‘functional modules.’

It combined the brain scans from the participants with an analysis of mathematical graphs of their networks of neurons to come up with the first neurobiological basis of human intelligence.

Two years ago, by pooling data from previous research, the same team pinpointed brain regions – among them the prefrontal cortex responsible for higher level thinking – which are activated more powerfully in people with higher IQs.

WHY IT’S GOOD TO DAYDREAM

Researchers at Georgia Institute of Technology found that people whose minds tend to wander from the task at hand tend to score higher for intelligence and creativity.

When they compared the scores to brain scans of the study participants, they found that daydreamers may just have more efficient brains, leaving them with leftover cognitive energy for thoughts other than the task at hand.

The research team hopes that their new findings will help to determine when wandering minds can be helpful or harmful to learning and attention.

‘What these data show is that this idea that most of us have that mind-wandering is a failure of control. It shows that there are some cases where mind-wandering may not be maladaptive,’ he says.

But until recently, it was not possible to examine how such ‘intelligence regions’ are functionally interconnected.

Then, earlier this year, they reported in sharper persons two brain regions involved in the cognitive processing of ‘task relevant’ information – the anterior insula and the anterior cingulate cortex – are connected more efficiently to the rest of the brain.

Another brain region, the junction area between temporal and parietal cortex that has been related to the shielding of thoughts against irrelevant information, is less strongly connected to the rest of the network.

Dr Basten said: ‘The different topological embedding of these regions into the brain network could make it easier for smarter persons to differentiate between important and irrelevant information – which would be advantageous for many cognitive challenges.’

In their current study, the researchers took into account the brain is functionally organised into modules.

Dr Basten added: ‘This is similar to a social network which consists of multiple sub-networks, for example: families, or circles of friends.

‘Within these sub-networks or modules, the members of one family are more strongly interconnected than they are with people from other families or circles of friends.

‘Our brain is functionally organised in a very similar way. There are sub-networks of brain regions – modules – that are more strongly interconnected among themselves while they have weaker connections to brain regions from other modules.

‘In our study, we examined whether the role of specific brain regions for communication within and among brain modules varies with individual differences in intelligence, i.e. whether a specific brain region supports the information exchange within their own “family” more than information exchange with other “families”, and how this relates to individual differences in intelligence.’