Alan Dershowitz, the most famous and flamboyant of Donald Trump’s defense team, accused his pro-impeachment Harvard rival of being ‘woke’ and claimed academics and lawyers flipped their views because of their dislike of the current president.

When addressing his ever-evolving stance on impeachment, Dershowitz claimed his opinion was never influenced by partisan issues – reminding those on the Senate floor, again, that even though he’s defending Trump, he’s a ‘liberal Democrat.’

Dershowitz also claimed that if it were a Democrat being impeached for the same reason, scholars would be on his side that it’s improper to impeach for anything that does not amount to a high crime or misdemeanor. 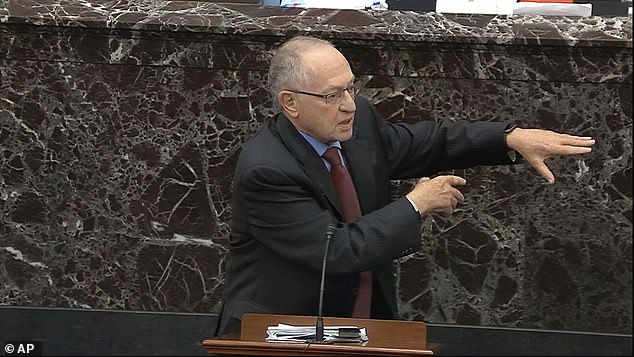 ‘These scholars are influenced by their own bias, by their own politics and their views should be taken with that in mind,’ he bashed. He also hit at fellow Harvard professor Laurence Tribe, claiming he has become ‘woke’ on impeachment because he wants to see Trump removed 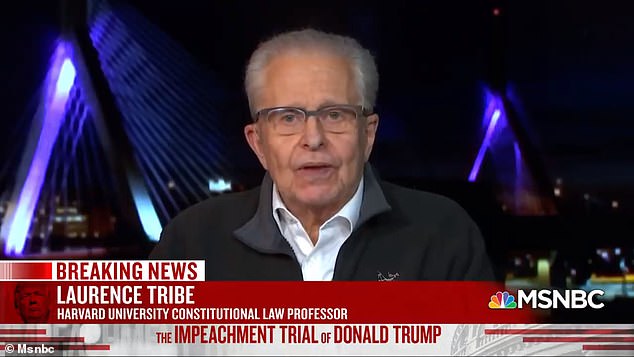 Tribe (pictured) has publicly spared with Dershowitz and the two have mocked each other for impeachment flip-flops in their television appearances. Dershowitz usually appears on Fox News and Tribe on MSNBC

‘If in fact, President Obama or President Hillary Clinton,’ he continued, using air quotes around the word ‘president’ before Clinton’s name, ‘had been impeached, the weight of current scholarship would be clearly in favor of my position because these scholars do not pass the shoe-on-the-other-foot test.’

‘These scholars are influenced by their own bias, by their own politics and their views should be taken with that in mind,’ he asserted. ‘They simply do not give objective assessments of the constitutional history.’

The staunch defense of Trump came during the eighth day of the Senate impeachment trial Wednesday, where the 100 senators were given eight hours, beginning at 1:00 p.m. – to ask questions of the defense and prosecutions’ legal teams.

Dershowitz, 81, also brought up Laurence Tribe, a 79-year-old Harvard law professor and constitutional historian who has publicly feuded with Dershowitz in the past and has mocked his flip-flop on impeachment.

‘Professor Tribe suddenly had a revelation, himself. At the time when Clinton was impeached, he said ‘Oh, the law is clear: you cannot – you cannot charge a president with a crime while he’s the sitting president,’ Dershowitz said.

‘Now we have a current president. Professor Tribe got woke,’ he continued.

‘And with no apparent new research, he came to the conclusion, ‘Oh, but this president can be charged while sitting in office.’ That’s not the kind of scholarship that should influence your decision.’

Tribe has advised Democrats on impeachment throughout the process and has also kept up a Twitter stream critical of his Dershowitz, a fellow Harvard professor.

Tribe and Dershowitz have both appeared frequently on news channels in recent weeks to mock each other’s views.

Dershowitz, who defended O.J. Simpson, admitted in an interview in the hallway of the Senate during a recess that it’s likely his opinion on impeachment would continue to evolve. 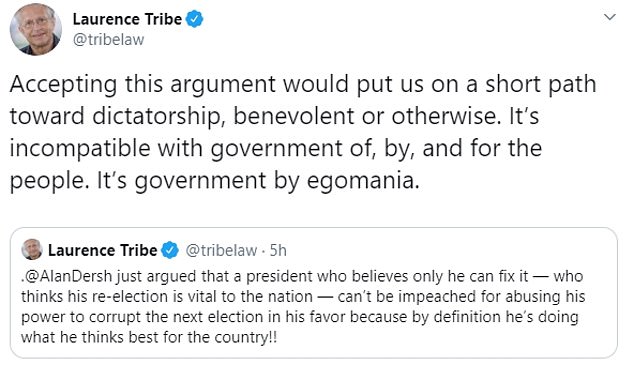 Tribe tweeted that if Americans agreed with Dershowitz, it would put the country on a ‘path toward dictatorship’

‘You know, I’ve changed my view so many times about so many issues. I’ve written 40 books, and every time I write a book, I think of it as a first draft. And then I write another book and another book. And my views evolve and change,’ Dershowitz told reporters in the Capitol.

‘So, I was shocked that people thought it was such a big deal that I had changed my views,’ he continued. ‘Of course I changed my views, I’m probably going to change them again. In fact, even in the course of this debate, I’ve changed them.’

‘These views evolve and change,’ he admitted. ‘But I can tell you one thing, none of the changes are partisan. I’m a liberal Democrats. I would be making this argument for Hillary Clinton. On the other hand, some of my colleagues’ views change corresponding to their political views, mine did not.’

Dershowitz, who also represented Jeffrey Epstein in a case in the early 2000s, has come under fire for being a divisive figure.

‘People have said, ‘Well, how come everyone disagrees with you?’ Well that’s been my life,’ Derhsowitz told reporters questioning him in the Capitol Wednesday.