You’ll have to BOOK an A&E appointment this winter: NHS told plans for patients to ‘call first’

Patients will be asked to book an A&E appointment by calling 111 this winter, NHS bosses have been told.

The plans, revealed in a board meeting for NHS England and NHS Improvement yesterday, are set to be put in place before December.

But hospitals will not turn away patients who turn up without calling ahead of their visit, it was claimed.

Pilot studies of the ring-ahead scheme at casualty departments in Portsmouth and London have reportedly produced good results.

Patients will be asked to book an A&E appointment by calling 111 this winter, NHS bosses have been told. Pictured: St Thomas Hospital, Westminster

The plans to ‘transform’ A&E care will move towards scrapping the four-hour waiting time target, it was also revealed.

Hospitals will be asked to rapidly adjust to the measures and make improvements as they go, according to board papers seen by The Times.

The standard is 95 per cent of patients visiting A&E should be admitted, transferred or discharged within four hours.

However, the NHS has failed to hit its four-hour benchmark for almost five years in a row.

WHAT IS THE FOUR-HOUR WAIT TIME AND HOW WILL THE CALL-FIRST MODEL WORK?

Since then there has been a steady decline to October 2019’s record low of 83.6 per cent.

That low meant that one out of every six people who went to A&E in that month waited there for more than four hours – more than 320,000 people.

Unable to meet the ambitious 95 per cent, the health service has been looking to switch to a system which doesn’t measure waiting times against a set benchmark but simply tries to treat the more urgent cases faster and loosens the limit for less serious patients.

And during the Covid-19 pandemic, NHS chiefs have revealed they are trialling a phone-first model.

Patients would ring a number — like the NHS 111 line, which is for patients to ring if they need help but it is not an emergency — as a first point of contact.

Patients who are deemed to be urgent and at risk of death will still be told to go straight to A&E. But those with a broken limb, for example, may be told to wait.

People who do not have an appointment won’t be turned away, however.

He revealed in June that two casualty departments in Portsmouth and London would be involved in a pilot scheme.

Replacing the target has been on the cards since Theresa May was Prime Minister, when she and NHS bosses said it was time to look again at how the NHS was assessed.

Health Secretary Matt Hancock has previously hinted at scrapping the target in a bid to reduce demand on services.

Attendances to A&E have dramatically dropped during the coronavirus pandemic as people have steered clear of hospitals during the lockdown.

But as the threat of a potential second wave of the coronavirus pandemic looms, MPs have been told that an appointment-first system in A&E could help prevent overcrowding.

Patients would ring a number — like the NHS 111 line, which is for patients to ring if they need help but it is not an emergency — as a first point of contact.

Patients who are deemed to be urgent and at risk of death will still be told to go straight to A&E. But those with a broken limb, for example, may be told to wait.

People who do not have an appointment won’t be turned away, however, Pulse magazine reported.

Pilot studies of a new, call first model have since started – three years after NHS England and the Government started talks about such pilots.

He revealed at the end of June: ‘We are piloting various forms of that “call first” [model] in London, in Portsmouth, in other areas too, because we want to make sure that we get the model right.

‘We want to move — as we did before Covid — increasingly to a 111-first model, which ensures that we do everything we can to give appropriate advice to signpost people to the most appropriate place for treatment.’

At a joint board meeting of NHS England and NHS Improvement yesterday, Pauline Philip, national director of urgent and emergency care, said that pilot schemes were going well.

She said: ‘What we’re really doing is introducing something like a different ”social norm”.

‘People traditionally have accessed emergency care by turning up in an emergency department, and now we’re saying there are better ways of doing this.’

Papers revealed hospitals will be asked to adapt ‘rapidly’ to the measures, which have yet to be finalised.

Pulse reported that the papers said: ‘Early mover systems – one in each region – will be the first to trial some of these innovations. An early, formal evaluation of the impact on services within the early mover geographies has been commissioned for September.

‘The ambition [is] then that all systems will have implemented a minimum specification of the model by the first December 2020.’

The plans were described as a ‘profound change’ by Lord Prior of Brampton, chairman of NHS England.

The chief analyst at the King’s Fund health think tank, Siva Anandaciva, told the Health Service Journal that ‘rapidly changing how A&E performance is measured during autumn will be no mean feat’.

He added that it will be especially difficult while the NHS is preparing for a potential second wave of coronavirus.

The joint board of the Royal College of Emergency Medicine and other royal colleges said: ‘The roll-out of new standards would been to be part of the wider transformation of urgent and emergency services.’

Ministers have been warning of a potential second wave of the pandemic this winter, but now fear it could come sooner. Boris Johnson fears a second wave of coronavirus could start within a fortnight, it’s been revealed.

A senior government source told the Mail the Prime Minister was ‘extremely concerned’ by outbreaks ‘bubbling up’, both at home and abroad.

Although the number of UK cases is relatively low, rises were recorded each day last week for the first time since the April peak.

The seven-day average stands at almost 700 – 28 per cent up on three weeks ago. 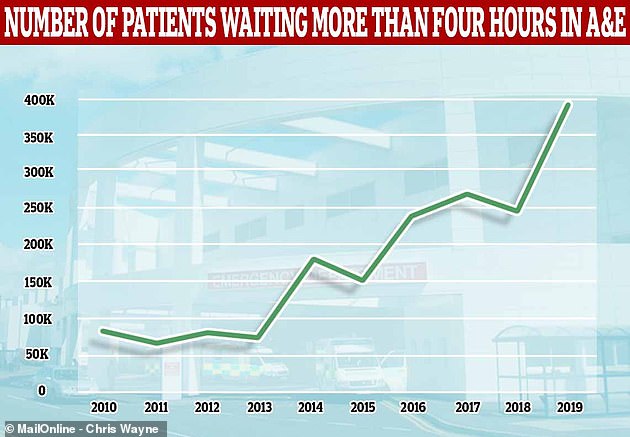 The NHS has failed to hit its four-hour benchmark wait time for almost five years in a row. December 2019 data revealed for the past nine years, the number of people waiting more than four hours in A&E has soared from a low of 66,661 in 2011 to a record high of 396,762 in 2019