Young actor, 13, forced to change schools after students bullied him

Actor, 13, who starred in a Harry Styles music video forced to change schools after bullies set up fake fan pages to mock him and sent him threatening messages insists he’ll never let abuse stop his dreams

A young actor who was forced to move schools because of bullies said that the nasty students never deterred from following his dreams.

His mother decided to pull him out of his school because of bullies who would send him threatening messages, throw things at him, and set up fake social media accounts to make fun of him.

But despite being picked on ‘every single day’, Ty said he ‘never considered giving up’ – appearing on This Morning today to urge anyone being bullied to speak out.

Ty Mcphee currently plays Callum Adams in BBC Scotland’s drama River City and starred in the music video for Harry Styles song Adore You. He is pictured on set with the pop star 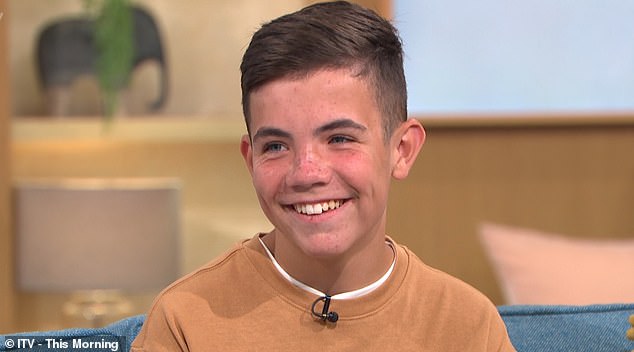 Budding actor Ty Mcphee, 13, from Glasgow, appeared on This Morning today to speak out about the horrendous bullying he faced at school

Describing the bullying he endured, Ty said: ‘Sometimes people made fake social media accounts of me, fake fan pages pretending they were someone from another country who wanted to meet me.

‘They were sending threatening messages and all that. I’ve had things thrown at me, I’ve had people talking behind my back.

When asked whether he considered giving up, he said: ‘I always wanted to keep climbing that ladder and keep pushing that goal.’

After leaving the school Ty spoke out in an Instagram, where he told his followers it felt like the ‘whole school was against him’ while he was being picked on. 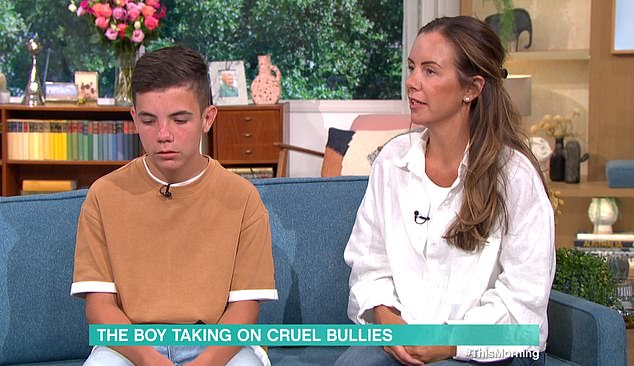 His mother (right) decided to pull him out of his school because of cowardly bullies who would send him threatening messages, throw things at him, and set up fake social media accounts to make fun of him

In the video posted last week, Ty said that now he’s spoken out he felt a ‘weight off his shoulders’ and felt he could start to be him again, encouraging others that it ‘will get better’.

‘I did get a lot of messages off of some people who are going through the same thing,’ said Ty this morning.

‘I did realise that some people are going through it it worse than me and speaking out does make it better, sometimes it doesn’t. But you always have to speak to anybody, whether it’s a parent or a friend.’

It was Ty’s dad Stuart who encouraged the young actor to speak out against his bullies on social media.

His mother said: ‘He made the video without any of us knowing about it and he sent it to us on WhatsApp and said “Mum, I’ve posed this video”. 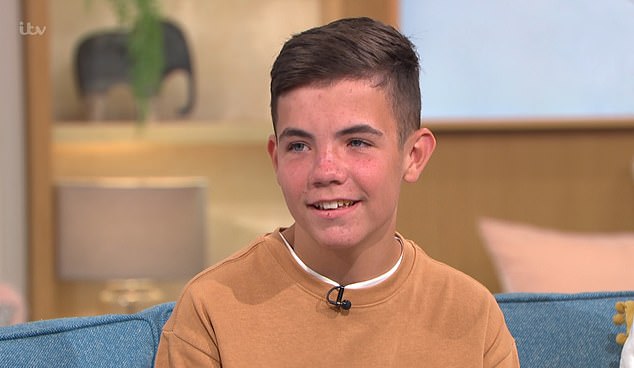 But Ty says that despite being picked on ‘every single day’, he ‘never considered giving up’ on his dream of being an actor 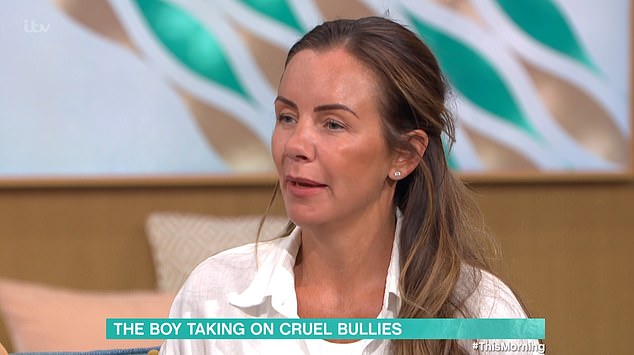 When asked what Ty’s school had done to stop the bullying, the actor’s mother said that they ‘didn’t help’

‘I was so proud of him doing it and he’s been fighting these demons for a few years now. He’s been going into his shell and it’s so frustrating as a parent to see that when your son has a dream.’

She added: ‘It’s been going on quite a while and his sister brought it to light to me his twin sister, she made us aware of it and Ty opened up, but it was everyday, every single day.’

When asked what Ty’s school had done to stop the bullying, the actor’s mother said that they ‘didn’t help’, admitting that she never expected the negative backlash her son had because of his career.

She said: ‘The school didn’t help, I made the school aware of his career when he started high school, I never thought it would be an issue with other kids, I never expected the backlash. I thought as they got older kids would be positive about it.

‘I contacted the school on many occasions and when I did remove him from the school that did break my heart, he has never been separated from his his sister but I had to.’