Fewer young Americans are getting tested for HIV because they do not believe that they could have been exposed, a new report from the CDC reveals.

Though medical advances have helped to lower the transmission rate of HIV, the CDC recommends that everyone get tested at least once, in part because more than 160,000 people in the US are HIV positive and are unaware of their statuses.

People in this group would not know they had the virus to be able to tell sexual partners, and are the most likely to transmit it.

Yet 70 percent of those who had never been tested said they had not done so because they believed they were ‘unlikely to have been exposed to HIV.’

The CDC recommends that all adults get tested at least once, but as of 2015, nearly 70 percent of young Americans had never been tested, its new report reveals

Since the peak of the AIDS crisis in the mid-1980s, HIV and AIDS have remained in the public conversation, but have become better understood and more manageable.

‘There may be less emotional reaction among sexually active people about [HIV] and a more realistic sense of what risks actually are,’ says Dr H Hunter Handsfield, a professor emeritus at the Washington Center for AIDS and STDs and a former member of the American Sexual Health Association.

Encouraging though those numbers are, there were still 37,600 new infections in 2014.

The Centers for Disease Control and Prevention (CDC) recommends that all patients be screened at least once for HIV, and that people at higher risk – including those engaging in sex work, drug use, or high-risk sexual activities – get tested annually.

Even with the infection’s spread slowing, ‘a broad brush approach, in spite of the low yield, is still as smarter way to [minimize transmission] than by targeting’ high risk groups, Dr Handsfield says.

But the CDC’s most recent findings, published today, suggest that most Americans, especially young ones, just don’t think that they could be counted among those new cases.

According to the American Foundation for AIDS Research, 13 million children in 2000 had lost at least one parent to the disease. But that is not the case for the 15-year-olds surveyed in the new study, who had not been born by then.

The National Health and Statistics Report’s findings suggest that, for people in the survey’s youngest bracket, the AIDS epidemic is a distant memory.

The CDC conducted interviews with more than 20,000 Americans, asking questions about their sexual health practices.

But never-testing numbers soared in the youngest age group: a staggering 73.7 percent of 15- to 24-year-old men had never been tested, along with 63.9 percent of women in that age group.

Most of these young people said they didn’t opt for testing because it was ‘unlikely [they] have ever been exposed to HIV.’

This answer was particularly common among women across the board, men between ages 25 and 34, whites and more highly-educated people. 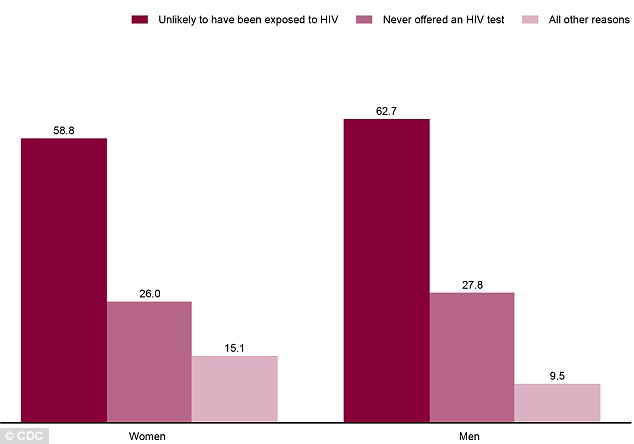 Nearly 70 percent of American adults said they had never been tested for HIV, and about 60 of both men and women said it was because they were ‘unlikely to have been exposed’

More than 20 percent of respondents said that they had never been offered an HIV test, making this the second most common reason given.

The CDC’s formal recommendations require informed consent to give HIV tests, but urges all primary care and hospital providers to offer and encourage HIV screening to their patients.

Some states, like New York, legally require primary care physicians and hospitals to offer the test to all patients, but this is not the case in most states.

Since the CDC’s study was based on self-reported information from patients, it is impossible to know if doctors did in fact offer the tests but patients simply did not recall this or did not report declining the test.

Dr Handsfield says that the effort and time that testing for HIV costs doctors may make them less likely to offer screening.

‘Physicians till have fears about opening questions about sexuality and drugs that they don’t feel they have time to address,’ he says. 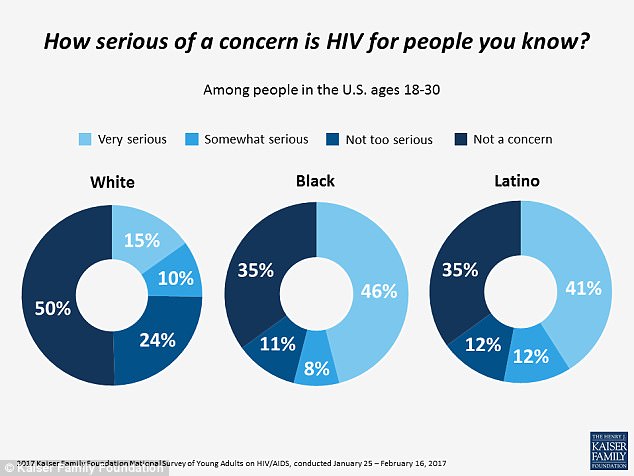 Young blacks and Latinos in the US see HIV as a much more serious risk than their white counterparts, a Kaiser Family Foundation survey found in November

Encouragingly, only 26.4 percent of women and 33.7 percent of men who engaged in risk-related behaviors said that they had never been tested.

A survey conducted by the Kaiser Family Foundation in November of last year found that the majority of young people still perceive HIV and AIDS to be a significant health concern.

But those number varied dependent upon race. While only 15 percent of white Americans between 18 and 30 see HIV as a concern for themselves and their peers, 46 and 41 percent of young blacks and Latinos said it was a ‘very serious’ concern.

Overall, the concern level of young people in general did not mirror low testing rates, but was consistent with HIV screening when the numbers were separated by race.

White women were twice as likely as their black counterparts to never have been tested, and 51.7 percent of white men had never been screened for HIV, as compared to only 32.2 percent of black men.

The CDC’s report said that ‘awareness of one’s HIV status is a key factor in improving individual health outcomes and reducing behaviors that may lead to new HIV infections.’