A British couple could face the death penalty after allegedly attempting to smuggle £2m worth of drugs into the UK.

Mohammed Tahir Ayaz, 26, and his wife Ikra Hussain, 20, of Huddersfield, West Yorkshire have been named by Pakistani authorities after their arrest at an airport.

The couple were planning to fly from Sialkot airport in Pakistan via Dubai to the United Kingdom.

They were arrested as they attempted to board the Emirates Airlines flight on Thursday.

Mohammed Tahir Ayaz, 26, and his wife Ikra Hussain, 20, of Huddersfield, West Yorkshire have been named by Pakistani authorities after their arrest at an airport on suspicion of smuggling £2 million of heroin 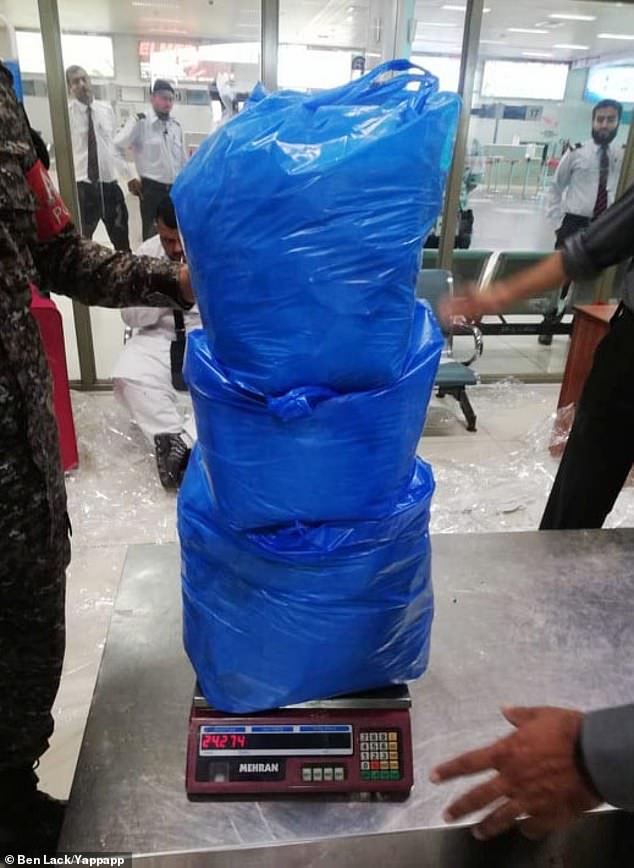 The couple were arrested at Sialkot International Airport. They were due to fly back to the UK via Dubai when they were arrested by Pakistani security forces

Airport police found an estimated 25 kilograms of ‘fine quality heroin’ hidden in female clothes. The drugs were split in different packets and divided across a number of garments.

Officials removed the bags containing the drugs and placed them into a blue carrier bag for weighing.

The couple allegedly told local security officials they were planning on smuggling the drugs from Pakistan to the UK.

It was the one of the major attempts of heroin smuggling foiled by ASF at Sialkot international airport.

The ASF authorities took the heroin into custody and registered a case against the couple.

The cost of the seized heroin was stated to be millions of rupees in the international market. The detainees were later handed over to Anti Narcotics Force (ANF) Force for further investigation.

There is very strict laws from the ANF on smuggling such huge size of drugs, such as the death penalty or life behind bars if they are found guilty.

The Foreign Office are currently trying to get information from Pakistani authorities concerning the arrests.