A young father who was left a quadriplegic is determined to walk again and regain control of his limbs after a tragic accident changed his life forever.

Chris Poulos, 32, was enjoying an after-work surf at Newcastle’s Dudley Beach north of Sydney when he came off his board and was knocked unconscious after hitting his head on a sandbar on November 15.

The father-of-two was dragged to shore by fellow surfers before being airlifted to Sydney’s Royal North Shore Hospital’s intensive care unit with suspected spinal injuries, where he spent five days in an induced coma.

Six days after waking from the coma, Mr Poulos has been transferred from intensive care to the spinal injuries ward, where he can now breathe on his own and speak.

He has posted a heartfelt update on Facebook from his hospital bed about the uncertain future ahead of him.

His sons Hunter 3, and Tyson, eight-months have inspired his strong determination to prove doctors wrong and beat the odds.

‘This week has been by far the most terrifying, testing and confronting week of my life so far,’ Mr Poulos wrote.

‘Doctors have stated that this will be a 1-2 year journey where I may or may not ever regain control of any of my limbs.’

‘I am determined to play with my children in the backyard, to wrestle and cuddle and hold each of the boys, to hug my wife and support her when she has her hard times. I want to live life to the fullest, whatever that might be for me.’ 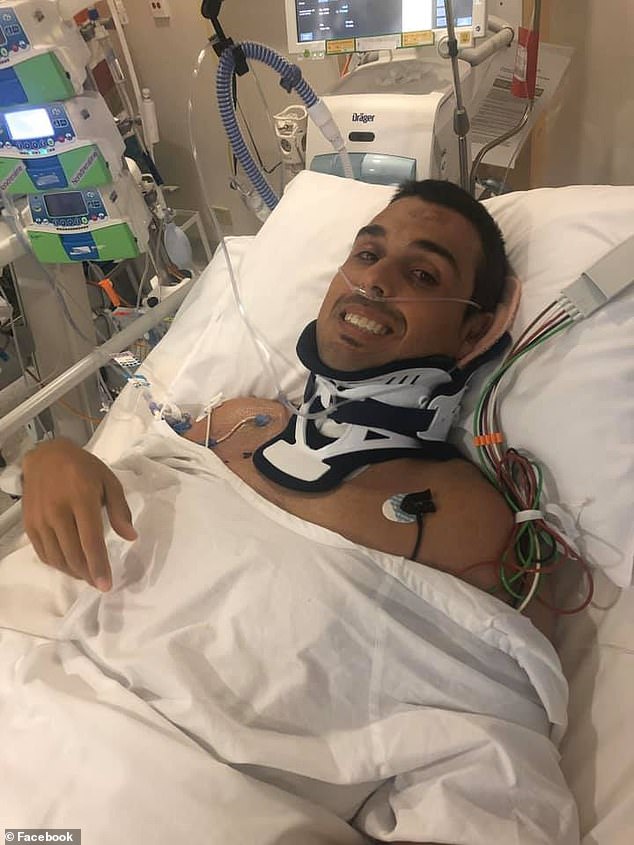 His wife of four year Alanna has been a constant vigil at his bedside since the accident.

‘We are taking every day as it comes, and praying for a miracle,’ Ms Poulos told Daily Mail Australia.

‘In his current state, he’s a quadriplegic. We don’t know what the future holds.’

‘But he’s still the same Chris  we all know and love. He’s talkative, remains positive and inspires me every day.’

‘No matter what happens, we’re going to get through whatever life throws at us.’

Their foreseeable future will be in Sydney while Ms Poulos’ parents are looking after their two young sons Hunter, 3, and Tyson, eight months, back in Newcastle.

‘He’ll remain hospital before going to a rehabilitation centre, which will likely be in Sydney,’ she said.

‘Doctors can’t say when we’ll be able to go home.’ 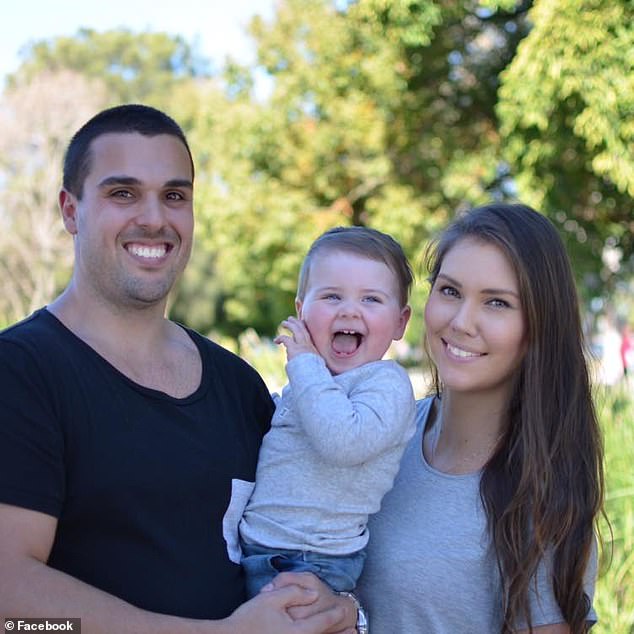 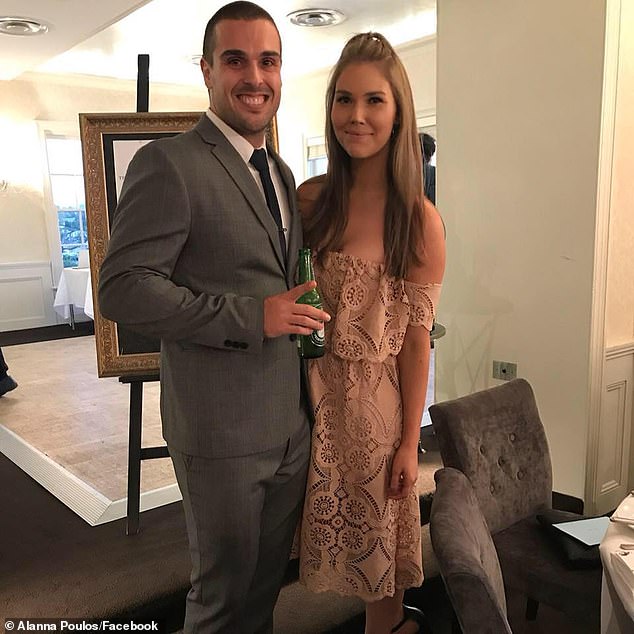 Ms Poulos can’t remember what police and paramedics told her when they came to her home to break the news that night.

‘I was standing in the kitchen feeling numb, unable to process what was being said and wanting to get to Sydney as soon as possible,’ she said.

‘Chris remembers being at Dudley on the Friday, getting a few waves and then nothing after that before waking up on Wednesday with a tube down his throat.’

‘We have this thing where we hold each’s other gaze and blink three times, which he was still able to do while sedated.’

She and her husband have paid tribute to the surfers who rushed to his aid and managed to pull an unconscious Mr Poulos to shore and call for help.

‘Chris and I have spoken to the surfers that were involved in saving his life. I know it was a really horrific situation for them,’ she told Daily Mail Australia.

‘They were able to monitor Chris’ heart rate and call triple-0 on his Apple watch.’

‘I think they took some comfort from how grateful we really are.’ 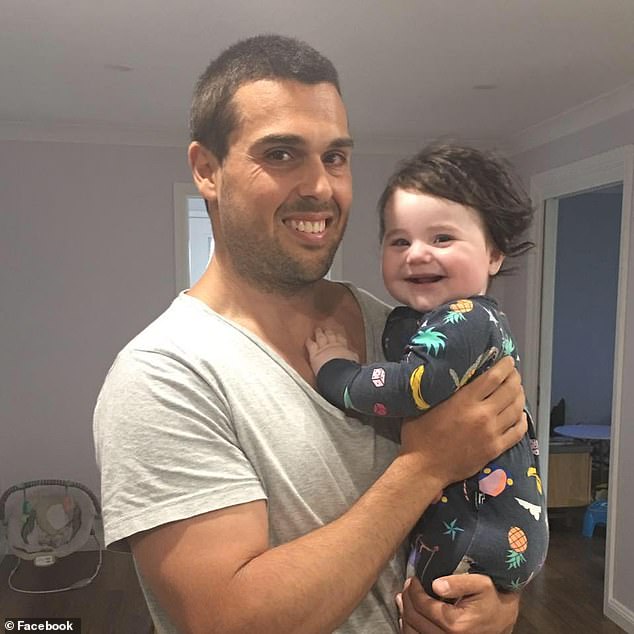 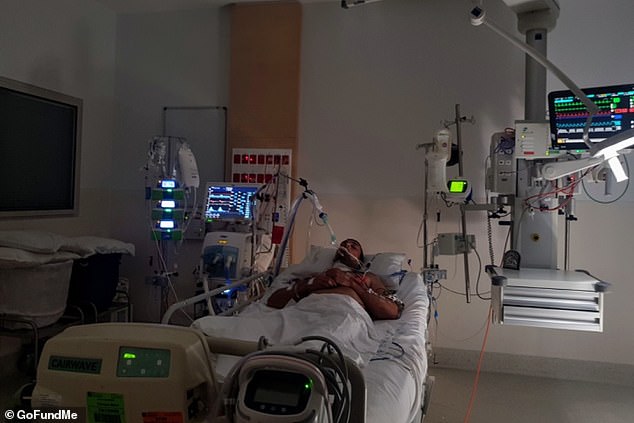 A GoFundMe page has raised almost $78,000 within five days to help ease the financial burden on the young family in the months ahead.

‘The family live in Newcastle and now face the reality that Chris will spend the next few months in Sydney while he undergoes further treatment, leaving Alanna to try and juggle a sense of normality for her boys, whilst also being there daily to support Chris,’ the page states.

‘Chris has an amazing passion and zest for life. He is a proud family man and a true mate to his circle of friends. He ensures everyone in his life is cared for and looked after and is always the first one to offer a helping hand or be there for a good old chat.’

His wife added: ‘He’s the strongest and most determined person I’ve ever met. Not only is he an amazing dad and husband but also my best friend.’ 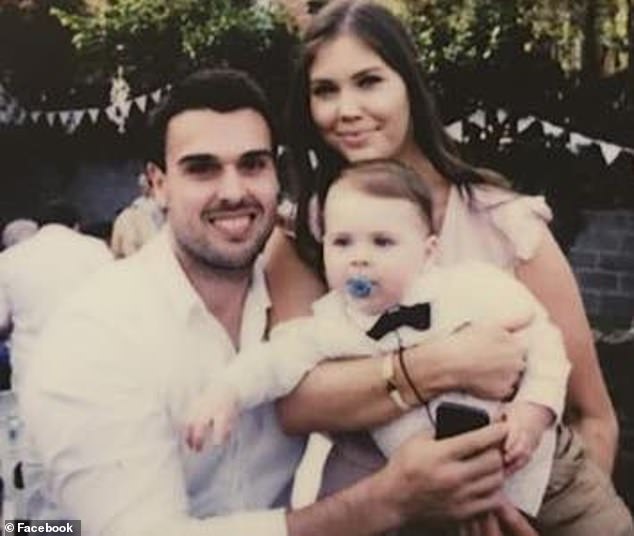 ‘He’s still the same Chris I know and love. He’s talkative, remains positive and inspires me every day,’ Alanna (pictured with her husband and son Hunter) told Daily Mail Australia 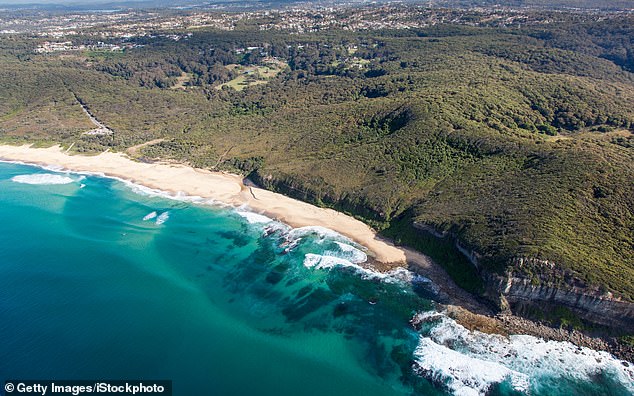 Mr Poulos said the last week-and-a-half has changed her perspective on life.

‘Life is too short and urge everyone to hold onto their loved ones for as long as possible,’ she told Daily Mail Australia.

Her husband added: ‘Please, if anyone can learn anything from this, it’s that life is precious and can change in a second. Look after yourselves, your loved ones, and don’t take a moment for granted.’ 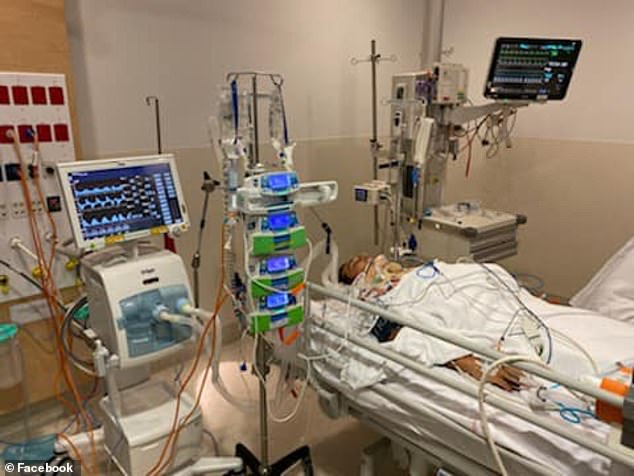 Chris (pictured in an induced coma) has described the last week as ‘by far the most terrifying, testing and confronting’ of his life 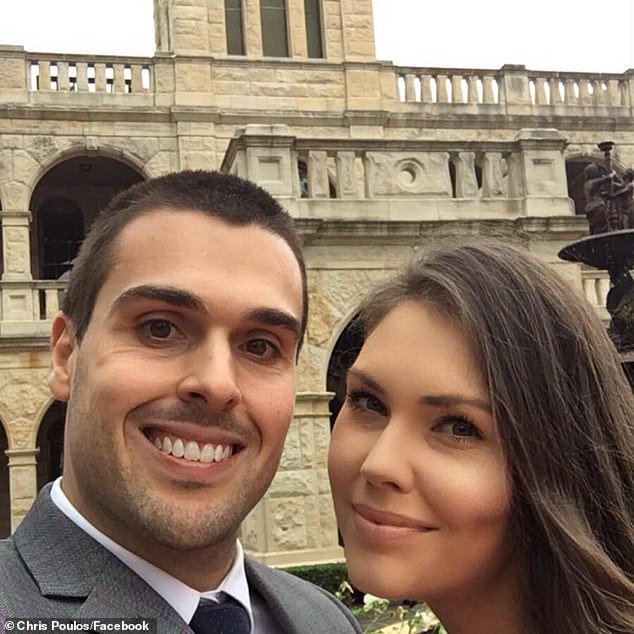