It certainly isn’t anything new that an author would be able to see himself in his brought-to-life characters – but this is ridiculous.

Game of Thrones fans have been worked up into a frenzy online after BuzzFeed News editor Ryan Broderick spotted an old photo of the series’ creator George R.R. Martin, and realized he had seen something similar before.

He soon shared his revelation on Twitter, posting a current photo of actor Kit Harrington next to the throwback image of the author and writing: ‘Wanna see something wicked f***ed up?’ 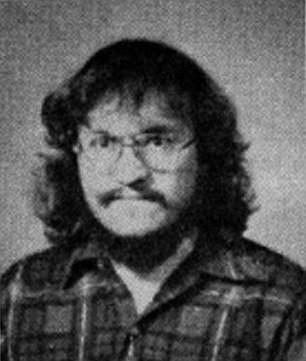 Shocking discovery: A throwback image of George R.R. Martin (right) is going viral for showing off a resemblance with Kit Harrington (left) 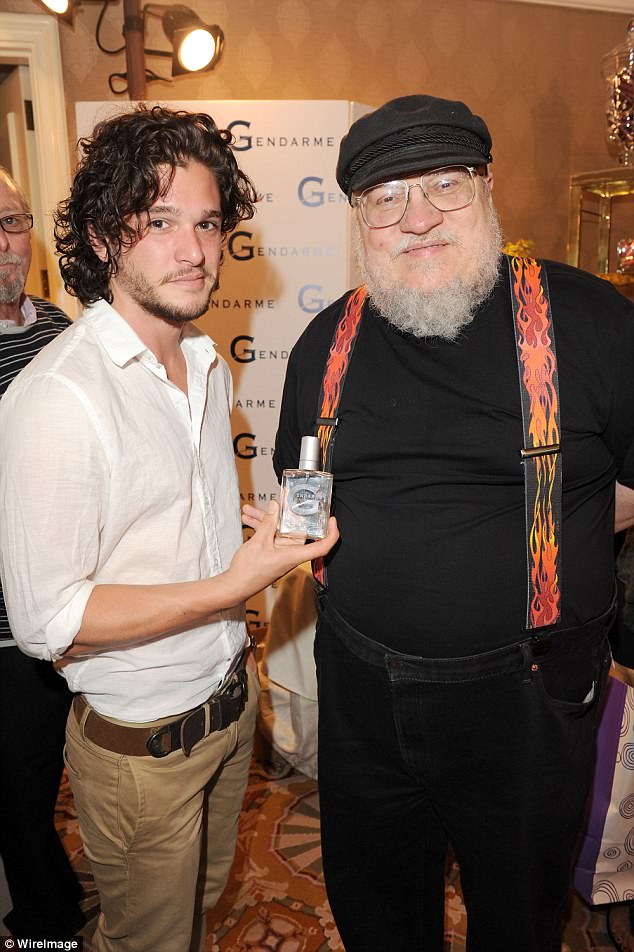 Present day: Kit is one of the lead actors on Game of Thrones, which was created by George

The pictures of the actor and the author see them both wearing thin-framed glasses, sporting shaggy dark hair and similar mustaches.

Twitter users couldn’t believe their eyes: The actor playing Jon Snow, one of Martin’s most popular characters, is the spitting image of the author himself as a young man.

The photo comparison took off like a shot, being retweeted more than 53,000 times in just three days, and attracting more than 130,000 likes. 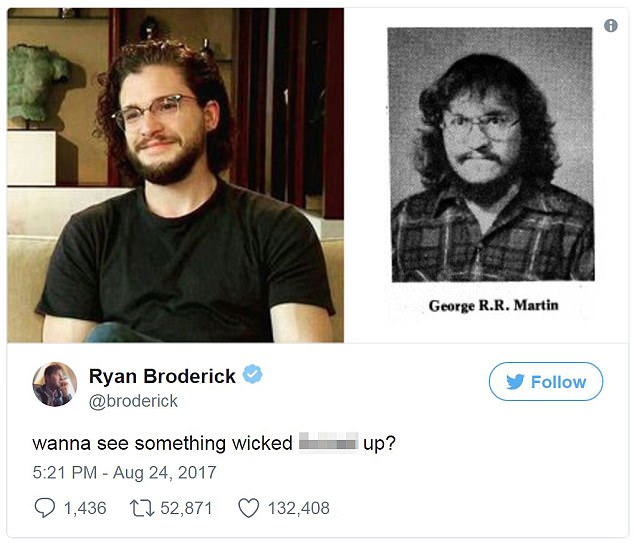 Checking it out: The similarity was spotted by BuzzFeed News editor Ryan Broderick 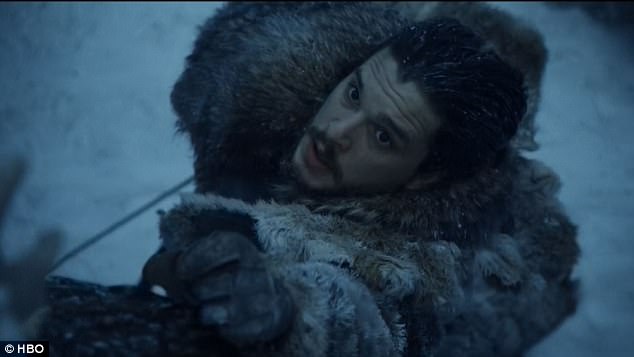 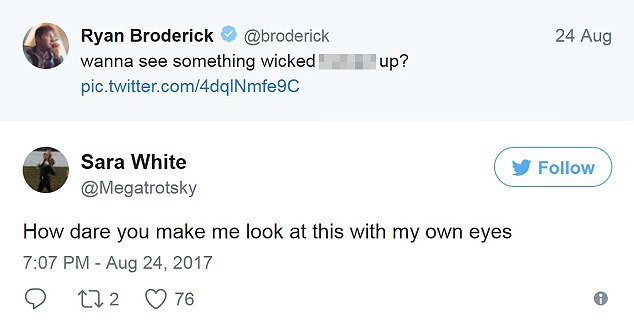 Worked up: Twitter users reacted to the comparison in a variety of ways, including anger 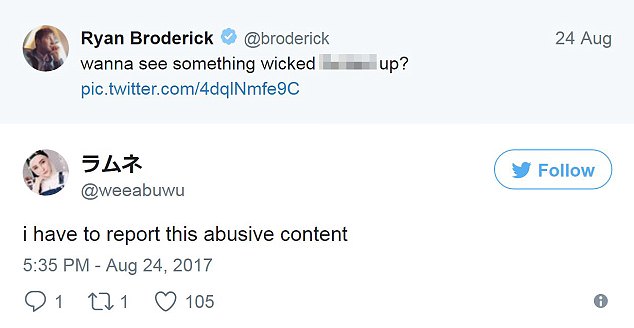 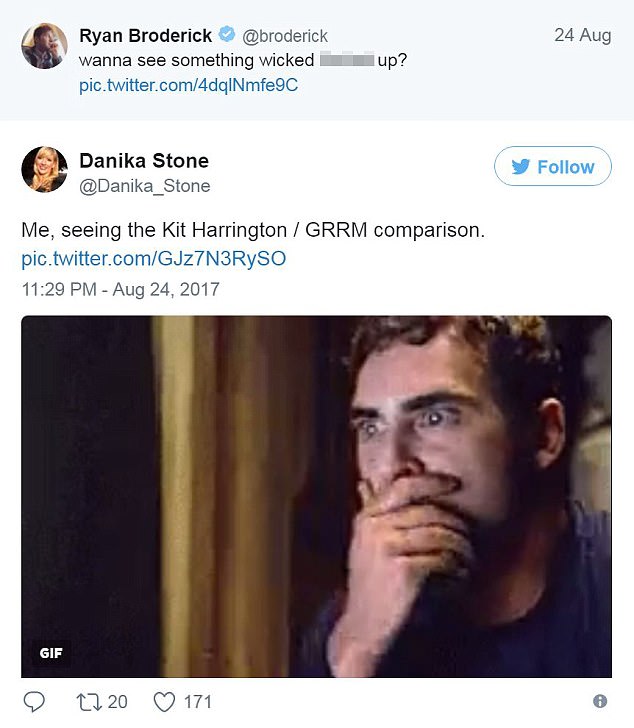 People commented on the comparison with a mix of laughter, disbelief and, strangely, anger.

‘How dare you make me look at this with my own eyes,’ wrote one user, while another added: ‘I have to report this abusive content.’

Some played on the show’s famous catch phrases in their reactions, such as one person who joked: ‘The 70’s are dark and full of terrors.’ 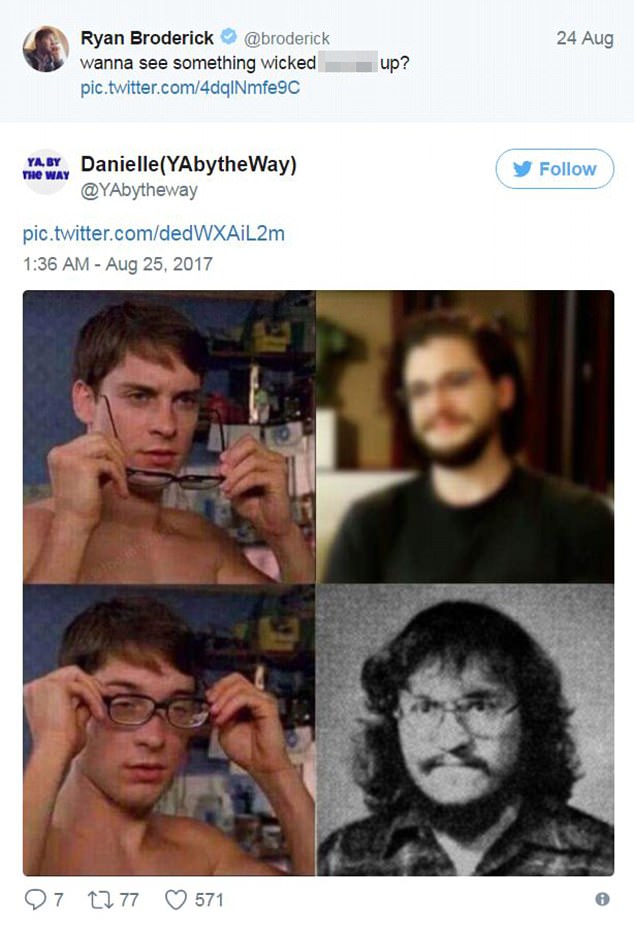 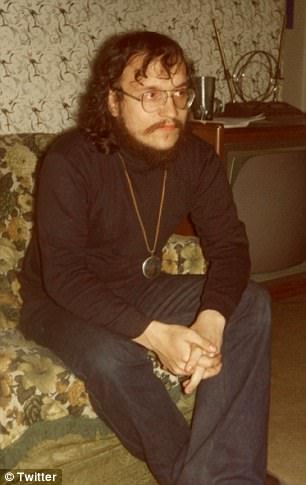 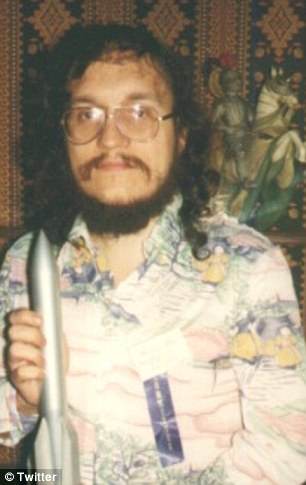 Another look: Of course, the comparison doesn’t quite hold up when looking at various other images of George from the 1970s

Others commented with possible conspiracy theories that line-up with the mystery surrounding Kit’s character’s background.

‘We’ve all been debating whether or not Rhaegar was his father but it was G.R.R.M all along!’ declared one user.

Of course, others voiced their disagreement over the comparison, and they seem to have been proven right given a number of other throwback images Martin has posted to Twitter.