A young girl was raped in Surrey while waiting for her mother to pick her up from a house party.

Police confirmed that a rape took place on Westhall Road in Warlingham, Surrey at around 11.30pm on Sunday night.

The young girl left the party believing her mother was outside waiting to collect her but was attacked by an unknown male.

Two passers by, a male and a female, saw the girl following the attack and took her home.

Westhall Road in Warlingham, Surrey, where the rape is believed to have taken place

A statement, released by Surrey Police this evening, said: ‘The victim, a young girl, left a party in Westhall Road at around 11.30pm believing her mother to be waiting for her outside.

‘This was not the case and this is when an unknown male assaulted her.

‘Following the assault she was taken home by two members of the public, a male and a female, who were passing by. 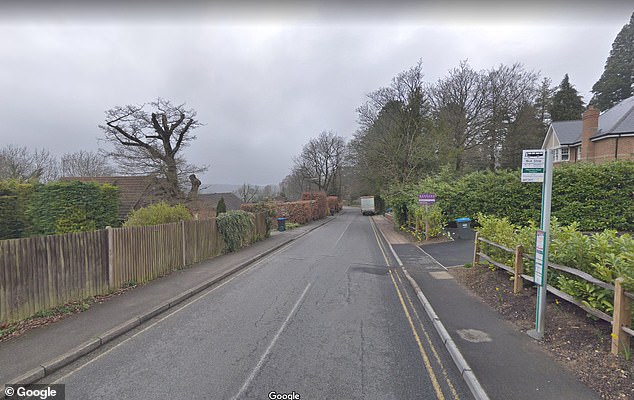 Police confirmed that a rape took place on Westhall Road in Warlingham, Surrey at around 11.30pm on Sunday night

‘Enquiries are ongoing at this time, but we need the public’s help, in order to obtain more information and ultimately find the person responsible.’

Detective Sergeant Gill De’Voreaux, from Surrey Police’s Safeguarding Investigation Unit, added: ‘The victim has been through a horrendous ordeal which we are taking extremely seriously. She is being supported by specialist officers.

‘If you were in the Westhall Road area between 11pm on May 25 and 12.30am the following morning and saw anything suspicious, or anyone behaving in an unusual manner that may be linked to this incident, please contact us on 101 with the reference PR/P19117103.’