‘I don’t want his money, I want yours’: Young mother kicked off a train because she was short $1 despite another passenger offering to pay

A young mother was left in tears after she was booted from a train on her way home because she was short just $1.

When Sarah Lewer, 25, was unable to pay her full fare to get from Wellington to Upper Hutt, in New Zealand, another passenger stepped in to pay the difference.

However, the conductor still refused the money.

Ms Lewer claimed the conductor said: ‘I don’t want his money, I want yours’.

Sarah Lewer, 25, was left stranded as she was kicked off the train as she short $1. Another passenger stepped in to pay the difference but conductor refused the money (stock image)

She told Stuff she was humiliated and forced to leave the train at the next platform.

It was Ms Lewer’s first day at a new job and her first time leaving her baby.

She was unaware the train she was on was more expensive than the regular service as she hasn’t used a train since she was a child as she suffers from social anxiety.

She then had to wait and hour and a half for her partner to drive to pick her up.

‘The thing that gets me is if you go to a supermarket and pay for the person in front of you, you get praised. This guy tried to help me and he got shut down in front of everyone. It was just a dollar and he gave it to me,’ she said.

Jareth Fox, the man who offered to help her, said he felt bad as it was Ms Lewer’s first time using the service and she was unaware of the higher fee. 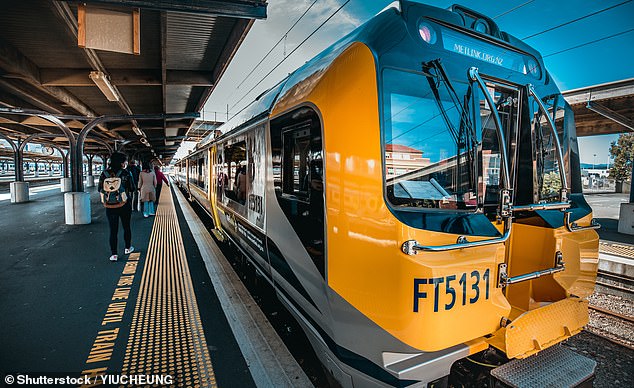 He said he felt the conductor was vague when explaining the situation to Ms Lewer.

‘It’s the dumb thing about our society, we look at the worst and just think it’s another person trying to rig the system, but he didn’t know the full story – it was this girl’s first day at work, there was a lot he didn’t know.’