A campaign to win over millennial voters and challenge ‘snowflake’ culture has been launched by a group of young Tory MPs aiming to seize the task of party renewal from David Cameron’s ‘Notting Hill set’.

The ‘Freer’ campaign will make the case for free markets and free speech amongst the younger generation.

The MPs said they were mobilising to win the battle of ideas as ‘socialism stalks our landscape again’ thanks to the rise of the ‘Corbynite left’.

The group will be run by Lee Rowley and Luke Graham, both state-educated MPs in their thirties, who represent working-class seats in Derbyshire and Perthshire.

Speaking at their launch last night, Cabinet minister Liz Truss said: ‘Whereas the Tory revolution was once fermented in the town houses of Notting Hill – now it’s the industrial towns and port cities where the call of freedom rings loudest. These places are fed up of being told what to do and what to think by others.’

In their launch manifesto, Mr Rowley and Mr Graham argued they needed to challenge those who ‘plot the destruction of capitalism while sipping their Starbucks lattes’.

They said: ‘Representatives of our generation now Instagram the very marches that would tax private enterprise and innovation out of existence.

‘They plot the destruction of capitalism while sipping their Starbucks lattes, and plan their South American gap years unaware that the freedom they enjoy here has been taken away from their Venezuelan peers by the same ideology they, these fortunate Britons, propound.’

The pair argued that ‘coming opportunities can only be fully enjoyed, and properly shared, if our country continues to chart a course of free markets, free society, and free expression’.

They added: ‘We must fight again for these timeless principles, which have spread prosperity, promoted aspiration, raised billions out of poverty, and have made us the most educated, healthy, and creative global generation ever to have lived.

‘Socialism stalks our landscape again – superficially alluring, and as innately dangerous as ever.

‘The Corbynite left is fossilised, incurious, and hellbent on shifting our national debate towards the exhausted tropes of socialism. That is exactly where we must not allow our country to go.’ 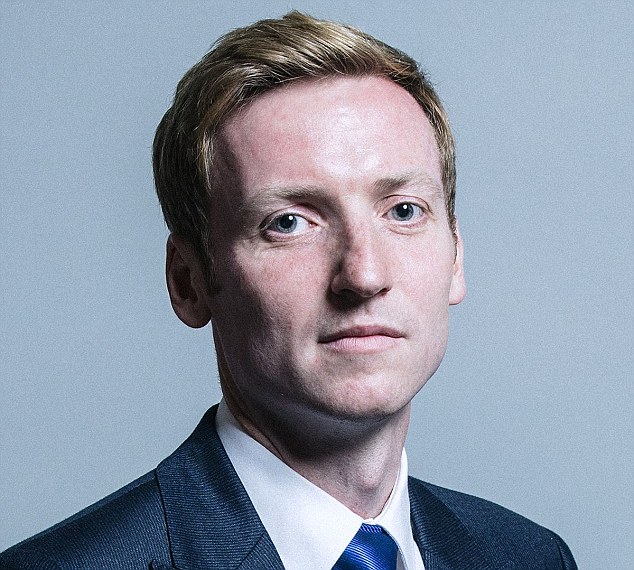 Lee  Rowley (pictured) and Mr Graham said they will argue against attempts to limit freedom of speech, following a series of rows on university campuses

Mr Rowley and Mr Graham said they will argue against attempts to limit freedom of speech, following a series of rows on university campuses.

They added: ‘An assault has been mounted on our speech and thought, with the emergence of a “snowflake” culture, promoting safe spaces and trigger warnings, and testing the essential Voltairean notion of freedom of expression.. ‘The right to express oneself, even provocatively, is central to the freedom of the modern liberal state, as indeed is the need to recognise the personal responsibility that comes with it.

‘Yet a loud, vocal minority – unrepresentative, as usual, of wider society both on campus and beyond – outrageously seeks to narrow our public discourse.’

The two MPs also said they will challenge the Left’s attempts to paint themselves as more caring. They said: ‘We must make the moral case for our principles. Socialism has no monopoly on virtue, compassion, or care. There is no superiority in a creed that has failed societies for generations.

‘Good people – regardless of the rosettes they wear – seek the advancement of others, a healthier and wealthier society, and recognise their duty to help those who have fallen on hard times.’