Young woman, 25, has a double mastectomy after testing positive for a faulty gene

A young woman has undergone a double mastectomy at the age of just 25 despite not having breast cancer, after the disease ravaged her family.

Sydney Weinstock, from Toronto, decided to take drastic action after discovering she carries the BRCA gene which increases the risk of developing the illness.

Breast cancer killed her grandmother and great aunt, while her aunt is in remission after battling the disease.

The producer inherited the faulty gene from her father’s side of the family, along with all her other female relatives from this branch.

Sydney had been aware of the possibility she might get the disease since she was a young girl and decided to get tested for the gene at 23 through a simple blood test.

Sydney Weinstock, from Toronto, underwent a double mastectomy after discovering she carries the BRCA gene, which increases cancer risk. Here she is pictured post-surgery

The 25-year-old, seen here before her operation, says she wanted the surgery as it ‘significantly reduces the odds of developing cancer’ 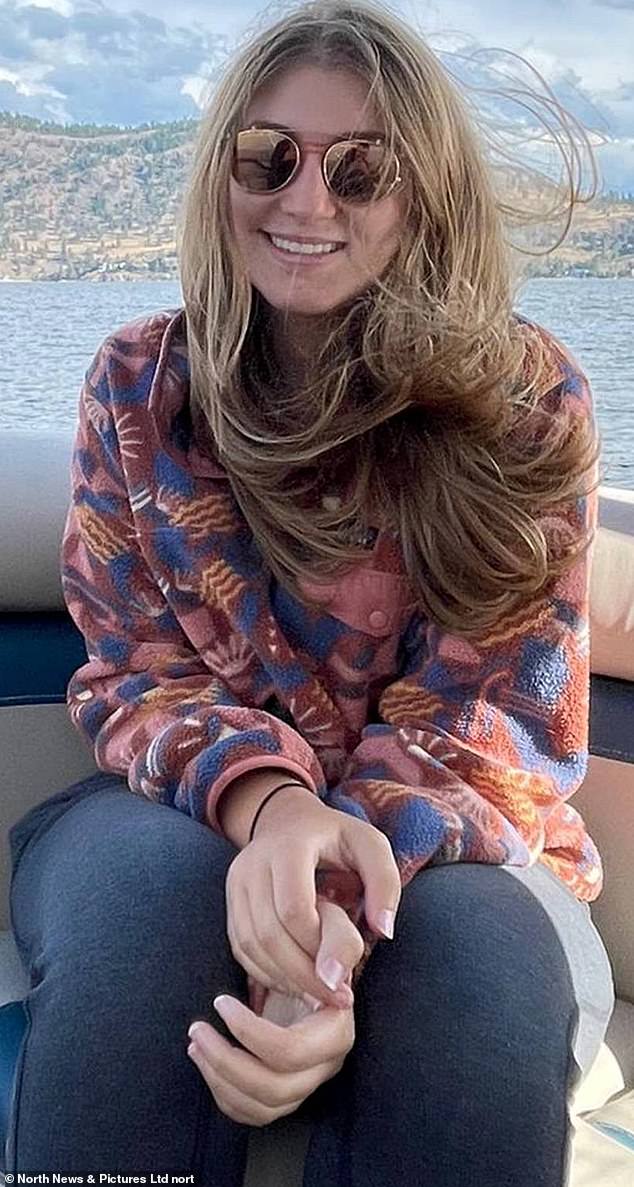 Sydney (pictured here before surgery) lost her grandmother and great aunt to breast cancer, and her aunt is currently in remission from the disease

She discovered she carried it in December 2020 and opted for life changing surgery to drastically reduce the risk of developing cancer rather than have regular mammograms for the rest of her life.

She said: ‘I know it sounds drastic but I had made this decision a long time ago and knew what I wanted.

‘People called me brave for having the surgery but I didn’t feel like that. In my mind, if this is going to prevent something that’s deadly, why wouldn’t I do it?

‘I had reconstructive surgery and I was able to keep my own nipples so they look like my breasts. They’re still swollen and haven’t fully recovered but I love them. 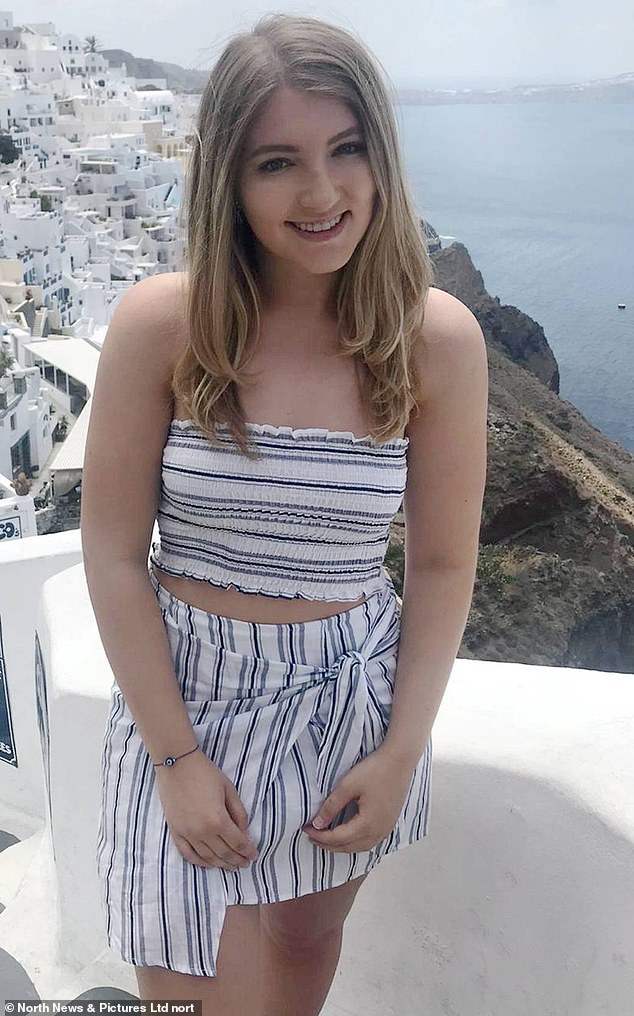 According to the producer (pictured here before her surgery), she loves her post-mastectomy breasts, which she says are bigger than before the op 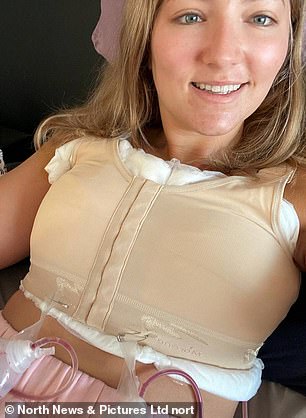 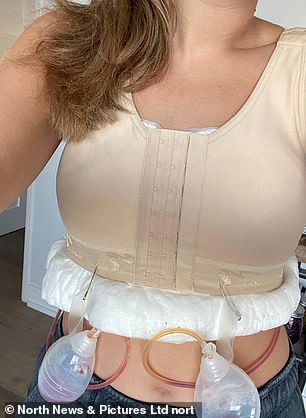 Sydney (pictured here during her recovery) underwent a bilateral nipple sparing double mastectomy, which meant she was able to keep her own nipples 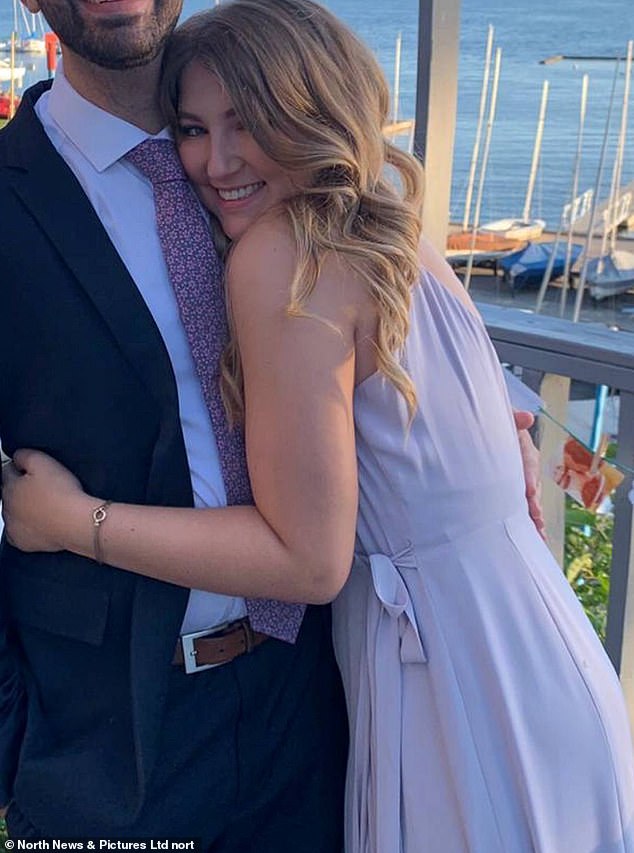 Now the 25-year-old is calling on others to ‘advocate for your own health’, saying it’s important people make the best decisions for their own circumstances

‘We were always very aware of it as my dad lost his mother when he was only 18 and saw his sister battle cancer.

‘My cousin tested positive for the gene and also had a double mastectomy six or seven years ago so I always knew that was what I wanted to do.

What is the BRCA gene and how does it affect people’s risk of cancer?

Having a mutated BRCA gene – as famously carried by Angelina Jolie – dramatically increases the chance a woman will develop breast cancer in her lifetime, from 12 per cent to 90 per cent.

Between one in 800 and one in 1,000 women carry a BRCA gene mutation, which increases the chances of breast and ovarian cancer.

Both BRCA1 and BRCA2 are genes that produce proteins to suppress tumours. When these are mutated, DNA damage can be caused and cells are more likely to become cancerous.

The mutations are usually inherited and increase the risk of ovarian cancer and breast cancer significantly.

When a child has a parent who carries a mutation in one of these genes they have a 50 percent chance of inheriting the mutations.

About 1.3 per cent of women in the general population will develop ovarian cancer, this increase to 44 percent of women who inherit a harmful BRCA1 mutation.

‘I was able to get tested after my dad found out he was a carrier of the gene and we discovered we had it.

‘I wanted surgery as it significantly reduces the odds of developing cancer.

‘It was an easy decision for me as I didn’t want to live in fear of developing cancer and I had an amazing support system of people who had been through similar experiences.’

Sydney went under the knife for a bilateral nipple sparing double mastectomy direct to reconstruction in January 2022.

Although Sydney has recovered from the procedure, there is a risk she could later develop ovarian cancer due to the inherited gene and may have to undergo a hysterectomy in the future.

However, she is now urging other women to get tested and check their breasts.

She added: ‘I would do it all over again if I had to.

‘I had a really positive experience with everyone involved in the surgery.

‘I would encourage other women to check their breasts and keep up with annual check ups.

‘There’s so many options with regards to surgery, you can have the mastectomy and leave your chest flat, have reconstruction with implants, use fat off your body to create ‘new’ breasts – whatever works for you.

‘As a 25-year-old woman, I felt the reconstruction was a great option for myself as it meant I didn’t lose my breasts and made it an easier transition.

‘It’s really empowering to take control of my health and my future.

‘Now I don’t have to worry about getting cancer like my relatives did.

‘It’s really important to advocate for your own health and make the decision yourself.

‘It’s your body and no one will understand what you are going through so make the choice that’s best for you.’