A ‘fit and healthy’ young woman died from asbestos-related cancer – 15 years after helping build a school using the material in her gap year, an inquest heard.

Medical researcher Rose Wharton, 33, fell ill from mesothelioma, which is normally associated with older workers involved in the construction industries.

The only time she could have been exposed to asbestos was while building a school in Argentina during her gap year when she was 18, her family told the hearing.

Oxfordshire coroner Darren Salter said it was a ‘very unusual’ case because the illness usually only affects those who worked around asbestos for decades. 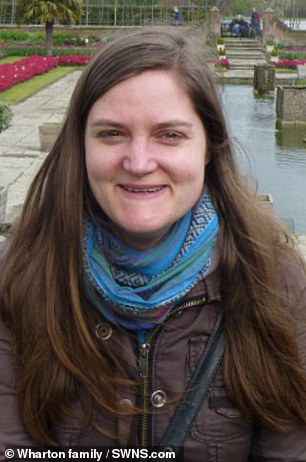 Rose Wharton, 33, died from asbestos-related cancer – 15 years after helping build a school using the material in her gap year, an inquest heard

‘I don’t think I have seen a case like this,’ she told the hearing.

‘Mesothelioma normally affects men working as plumbers or heating engineers for 30 or 40 years, but this is very different from that.’

Ms Wharton, who worked as a medical statistician and was born in Cambridge, was described as ‘fit and well’ with no medical problems except asthma.

She was diagnosed in September last year and died at her home in Oxford on May 20.

As the source of the asbestos exposure could not be confirmed, Mr Salter recorded a narrative verdict, stating the cause of her cancer was not known.

A JustGiving crowdfunding page set up in her memory has raised almost £3,000 towards research into peritoneal mesothelioma.

In a tribute, her colleagues at the Nuffield Department of Clinical Neurosciences at the University of Oxford said Ms Wharton would be ‘greatly missed’.

She studied Mathematics and Statistics in Newcastle University followed by an MSc in Medical Statistics at the University of Leicester before joining Oxford in 2010.

Her group of friends are running the Oxford Half Marathon on Sunday 7th October in her memory.

Rose’s family added that they wanted to thank John Radcliffe and Churchill Hospitals in Oxford and the Sobell House Hospice who provided excellent care and support and St Ebbe’s Church in Headington who provided moral support.