Your drive to work could get worse: Plans to add more TREES, cycle lanes in Sydney – see the routes

The plans also proposed transforming some of the city’s busiest streets like York, Clarence, Pitt and Castlereagh ‘from traffic corridors to destinations’.

But the plans have not gone down well with everyone.

How Broadway would look after the planned revamp. It would be ‘reimagined as a neighbourhood high street, with traffic lanes reduced each way leaving room for trees, pedestrians, public transport and cyclists’ 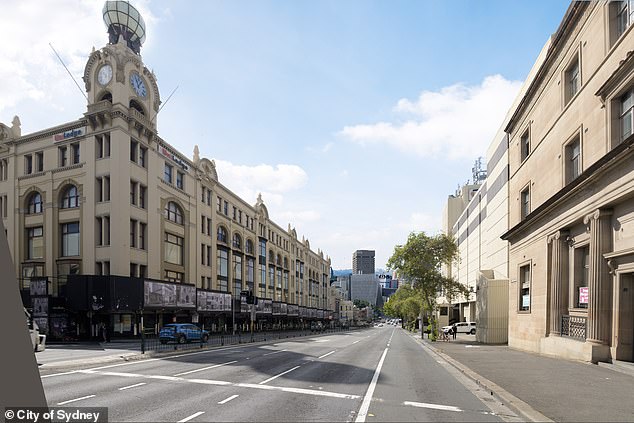 Tom Forrest, Chief Executive of Urban Taskforce Australia, said the plans do not take into account the impacts on all road users.

‘You can’t take over the roads of our biggest city and just make them available for people who live in a 5km radius,’ Mr Forrest told Daily Mail Australia.

‘Five hundred thousand people come into Sydney every day to work in the city and then they go home.’ 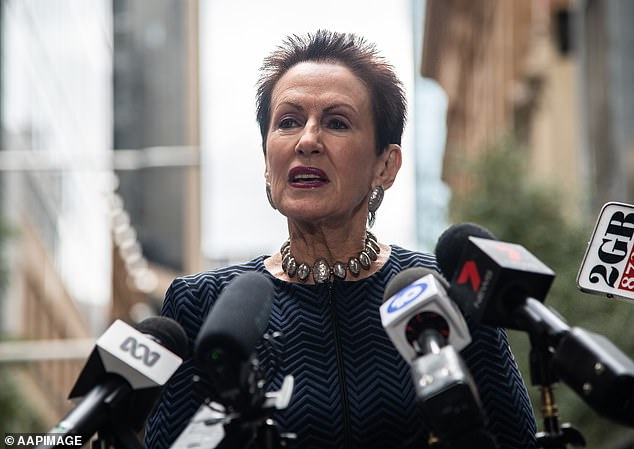 The plans, which include ‘traffic calming’ on Oxford Street, were about making Australia’s biggest city more livable 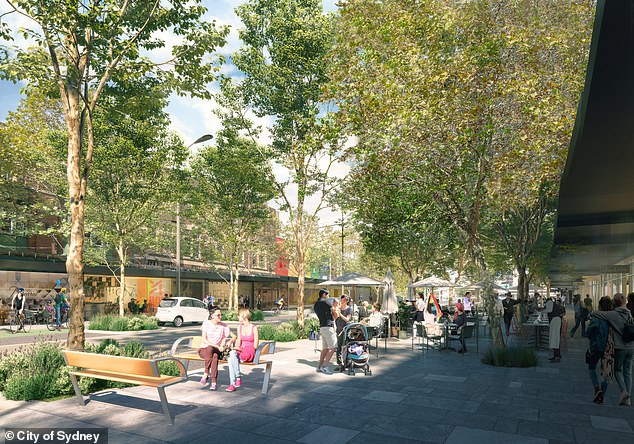 How Oxford Street might look after the revamp with broader pathways 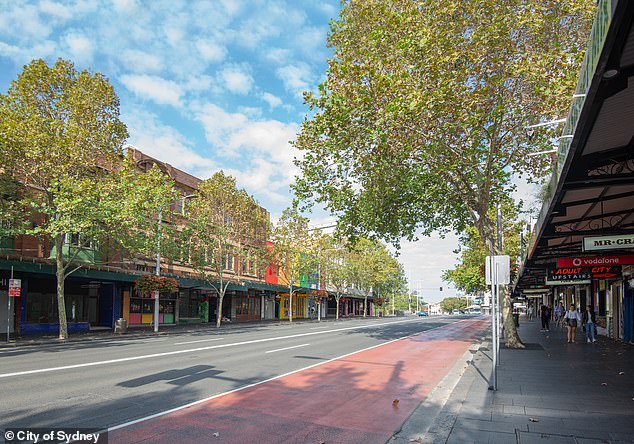 Oxford Street currently has three lanes in each direction, including bus lanes

‘They’re all the users of the city and they don’t get a say, they should get a say.’

Sydney Lord Mayor Clover Moore said the plans are about ‘looking beyond traffic’.

Do you support the City of Sydney’s plans to reduce traffic, plant trees and add cycle paths on on Broadway, Oxford Street, Park Street and Botany Road?

The Lord Mayor said the ‘successful transformation of George Street’ was a template for redesigning streets as ‘places for people, and places where people can linger’ and not ‘rush through’.

The changes are part of the long-term strategic plan called Sustainable Sydney 2050.

‘We have looked at the next opportunities for greening and pedestrianising the heart of our city, including the transformation of four major arteries into Green Avenues, with measures to reduce and calm traffic, plant trees and low-level gardens and introduce water harvesting and recycling,’ Ms Moore said.

Ms Moore said the pandemic highlighted how important quality outdoor public spaces – which she likened to ‘outdoor living rooms’ – are.

‘Cities need to be enjoyable to walk through and relax in.’

‘A city that has accessible and enjoyable public spaces is a great invitation for everyone across greater Sydney to come and explore.’

The announcement said Broadway – currently one of the major entry points to the city – would be ‘reimagined as a neighbourhood high street, with traffic lanes reduced each way leaving room for trees, pedestrians, public transport and cyclists’.

Oxford Street is already undergoing a process of ‘traffic calming’, with extended cycleways, which the City of Sydney plans say can go much further.

‘This can be taken further by reclaiming more road space for pedestrians and business, additional traffic calming and re-establishing the public domain as space for activation, entertainment, dining and people,’ a statement said. 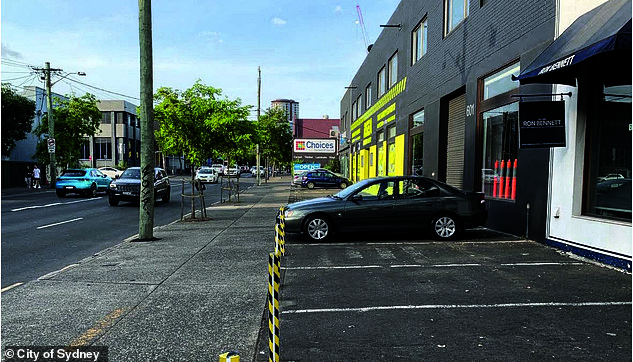 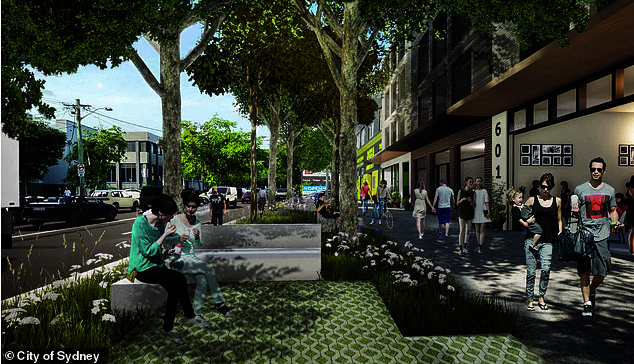 ‘We are just saying do not rush to it, take a full examination of all implications, on all road users, on traffic flows, but also on parking, safety, even on trees. If it passes all those things, then by all means.’

‘But don’t rush to an ideology-driven agenda.’

Mr Forrest said there is a case for responsibility for inner Sydney traffic planning and management being ‘taken away’ from the City of Sydney.

The Urban Taskforce is a peak body advocating on behalf of the property industry.

Mr Forrest said City of Sydney’s plans were ‘extraordinarily unfair on the many tradies and delivery staff who have no choice but to use the roads and their vehicles’.

‘The CBD of Sydney belongs to all of Sydney, in fact all of NSW and Australia.’

Mr Forrest recently proposed that all residents of Sydney should vote in the City of Sydney elections to ensure the CBD is run for everyone.

Sydney’s western gateway has been reimagined as a neighbourhood high street, with traffic lanes reduced each way leaving room for trees, pedestrians, public transport and cyclists.

The proposal provides space for efficient and reliable public transport, linking activities on Broadway and Parramatta Road to each other.

A re-imagined Park Street creates an east-west axis for the city centre as a traffic calmed avenue with more space for people waking and cycling.

Traffic could be directed to the Cross-City Tunnel with the street reserved for public transport and local access vehicles, leaving space for more trees, and for commuters from the future Pitt Street Metro station, reunifying Hyde Park and providing an appropriate edge to the planned Town Hall Square.

Last year, the City joined the State Government in announcing plans for a new cycleway on Oxford Street to Taylor Square.

Now the Federal Government is joining the project to extend the cycleway to Centennial Park’s Paddington Gates.

This cycleway will help calm traffic and create a more pleasant environment for pedestrians, and the many businesses along the strip.

Ultimately, this can be taken further by reclaiming more road space for pedestrians and business, additional traffic calming and re-establishing the public domain as space for activation, entertainment, dining and people – including footpaths of between 3 to 6 metres in places.

The City’s southern entry along Botany Road has a now-obsolete reservation for road widening, which again could give an extra 5,000 square metres of spaces for people and for trees, encouraging new active uses in the ground floor frontages.

These projects could include water collection and recycling to keep the city green and cool.