Your Home Made Perfect viewers are frustrated as makeover goes £40,000 OVER budget

Your Home Made Perfect viewers were frustrated after the home transformation went £40,000 over budget – and said they wish they had that much cash to spare.

Bank clerk Victoria and her husband Raheel, a fashion wholesaler, appeared on last night’s episode and explained they had £60,000 set aside to renovate their six-bedroom home in Milton Keynes.

Although the spacious property had plenty of space, it was impractical and not functional for life with their two young sons and five-month old twin daughters.

Architect Damion Burrows came up with a scheme that ‘flipped’ the layout of the house in order to make better use of the light streaming in from the south-facing garden at the back of the plot.

Pretty but not practical: Bank clerk Victoria and her husband Raheel, a fashion wholesaler, appeared on last night’s episode and explained they had £60,000 set aside to renovate their six-bedroom home in Milton Keynes. One of the biggest problems was the kitchen, which had so little counter space that the kettle and toaster had to be moved into the utility room 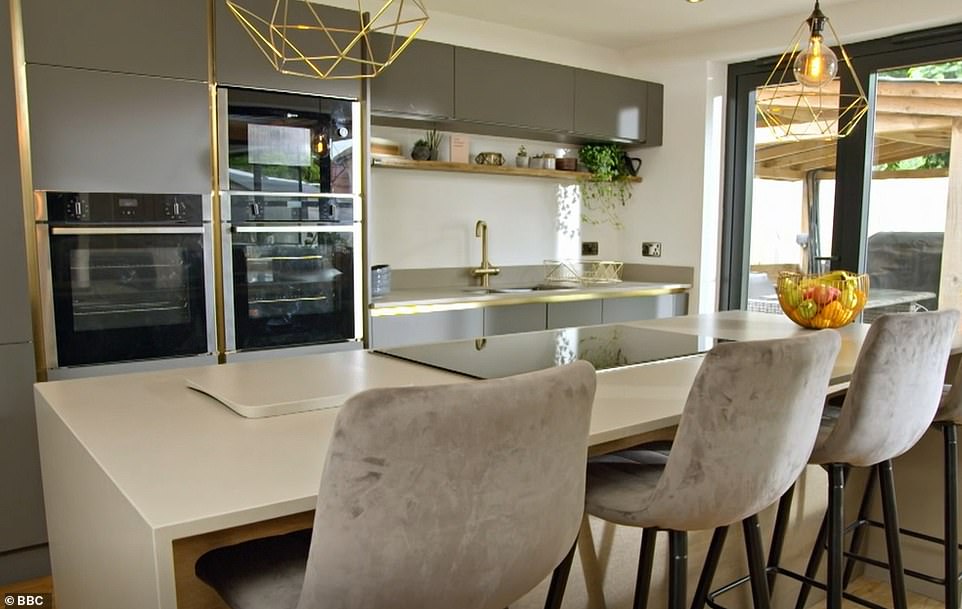 Heart of the home: The couple were given much-needed counter space, as well as in-built appliances as part of the high-end renovation (pictured). The couple added a kitchen island and gold touches for an ultra-luxe feel 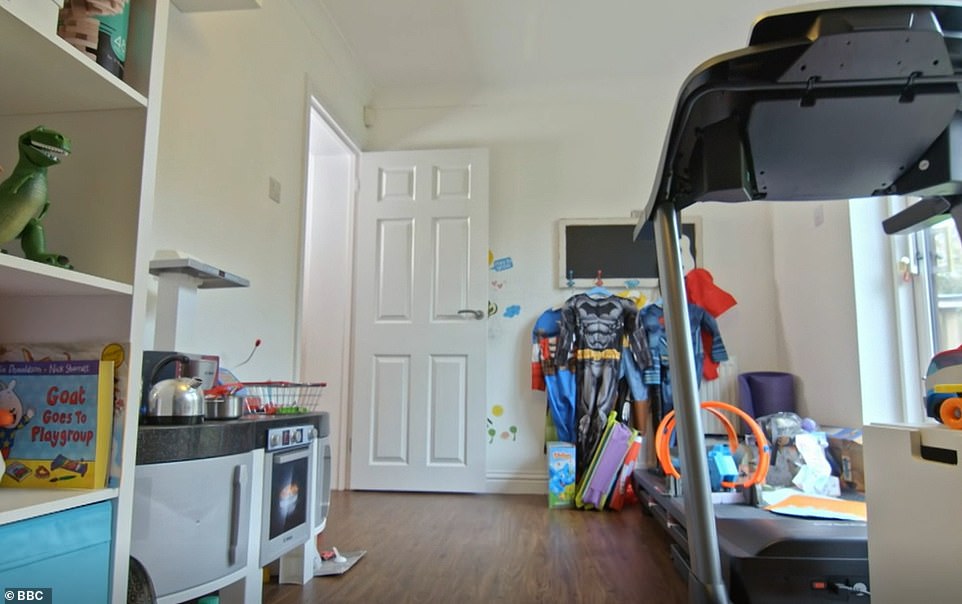 Unused space: At the back of the house there was an extension housing the children’s play room that they never used 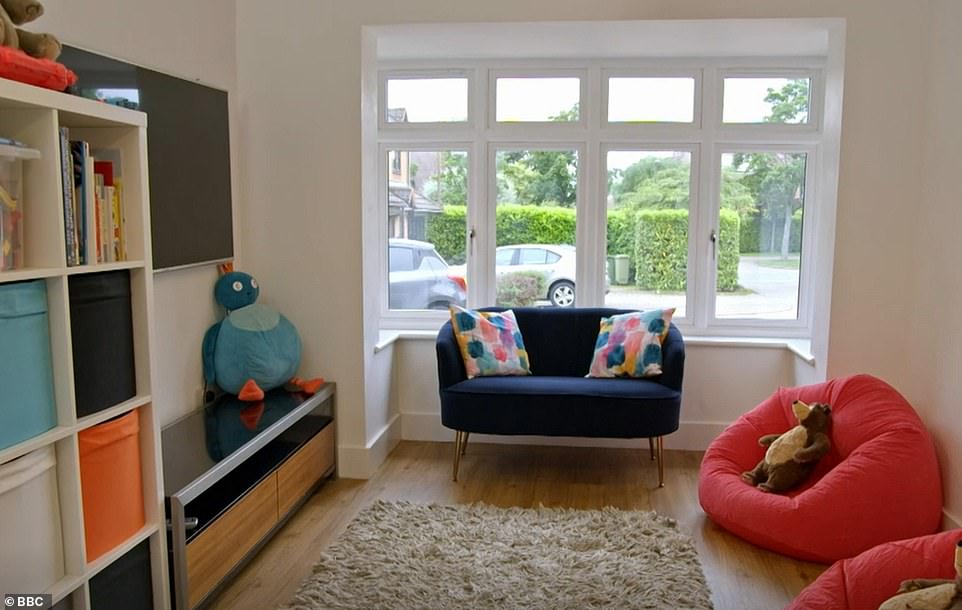 Keeping things cosy: The ‘den’ was moved to the front of the house and is now a welcome retreat for the four children 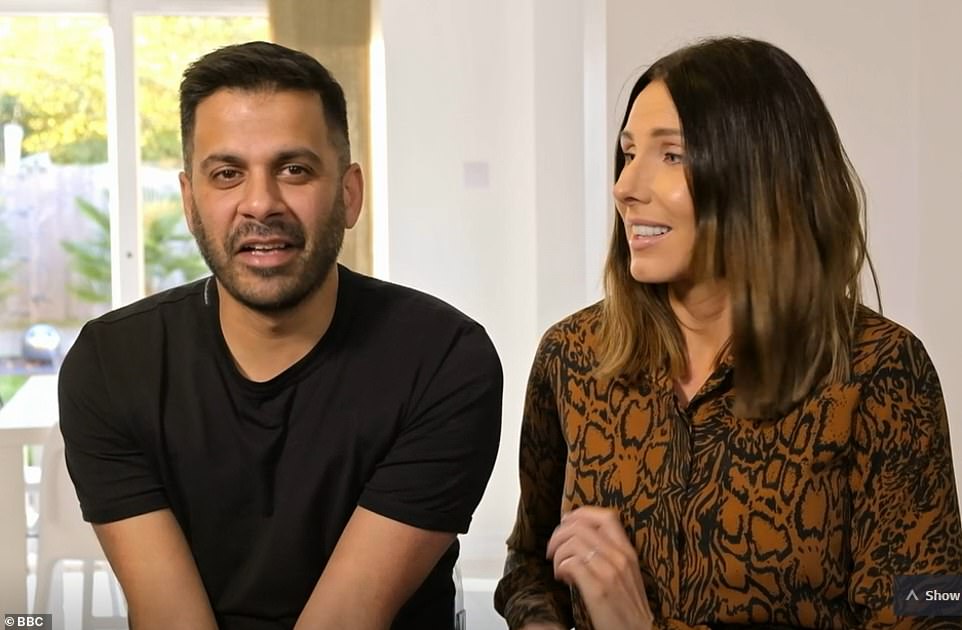 Thrilled: Parents Victoria and Raheel were delighted with the results of their £100,000 major home renovation 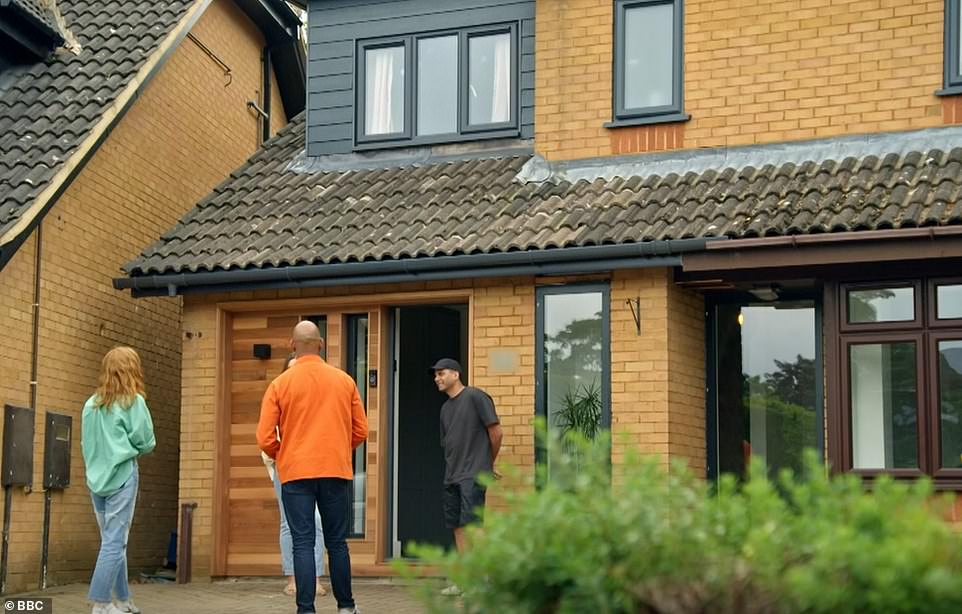 Family home: Victoria and Raheel bought the four-bedroom, 90s build on a ‘cookie cutter’ development in Milton Keynes with the view of starting a family. Pictured, the front of the house following the renovation on Your Home Made Perfect

While Victoria and Raheel were pleased, viewers were irritated that the project had gone at least £40,000 over budget

While Victoria and Raheel were thrilled with the result, viewers were irritated that the project had gone at least £40,000 over budget.

One tweeted during the renovations: ‘If the budget for this is anywhere near the £60k then I need to get in contact with the builders #YourHomeMadePerfect.’

Another posted: ‘We’ve just renovated the entire downstairs of our end of terrace 3 bed and it cost £60k (saved for 5 yrs and didn’t scrimp). Absolutely no way Damion’s design is £60k. #YourHomeMadePerfect.’

A third added: ‘And why cant they make the show stick to the budget, how do you find an extra £40 grand #YourHomeMadePerfect.’ 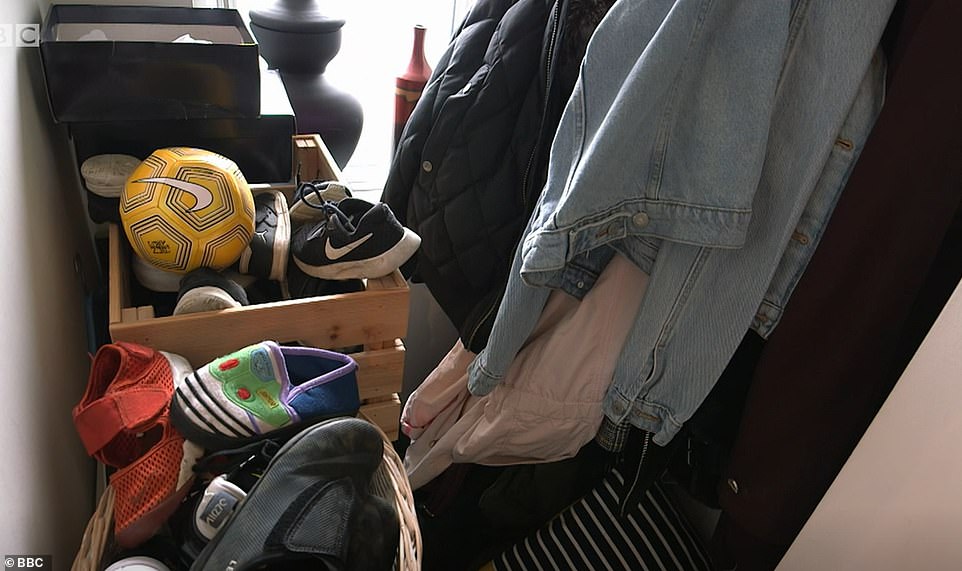 Source of tension: The hallway was much too small for family life and led to arguments when getting the children ready 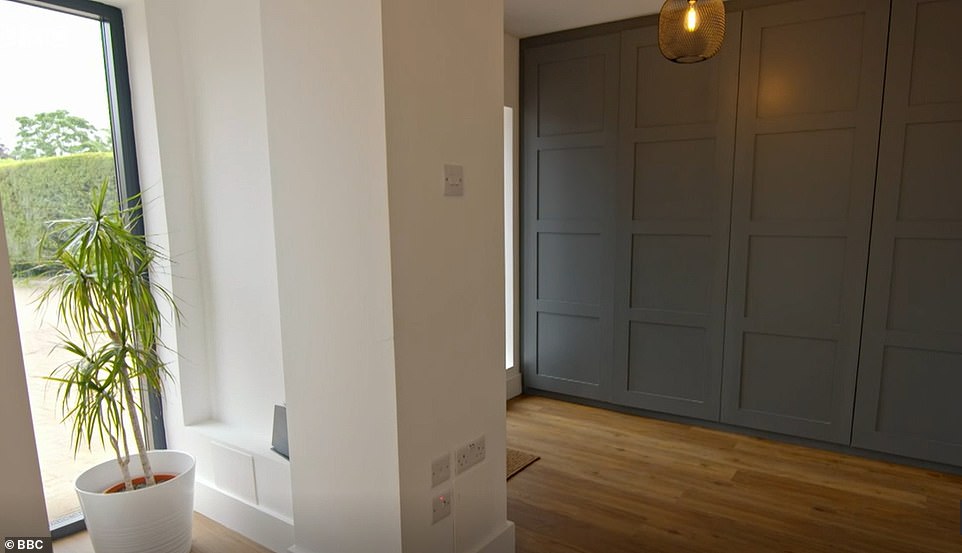 A space for everything: By taking away the garage, architect Damion Burrows found a way to make the hallway bigger 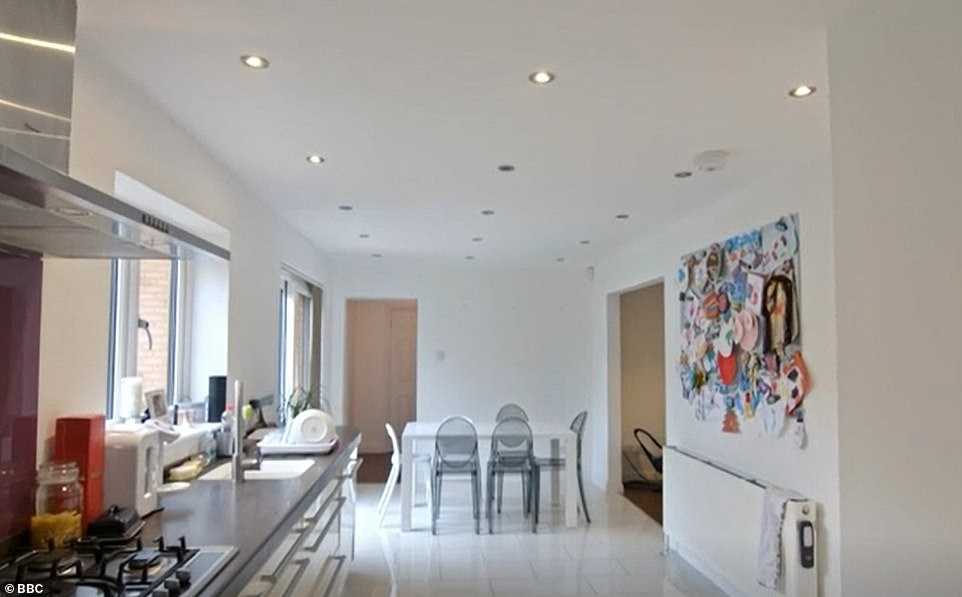 Not welcoming: The dining room and kitchen looked good but wasn’t practical and didn’t make the most of the light 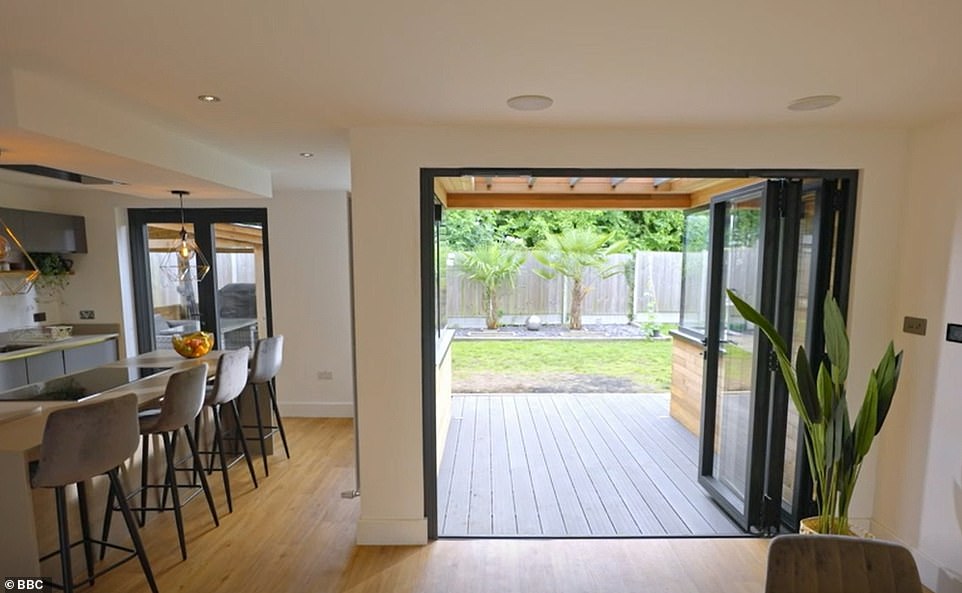 Serious wow factor: The involved adding a 10sq m extension to the space at the back of the house and flipping the layout to create a ‘horseshoe’ shape (pictured) that allowed in more light 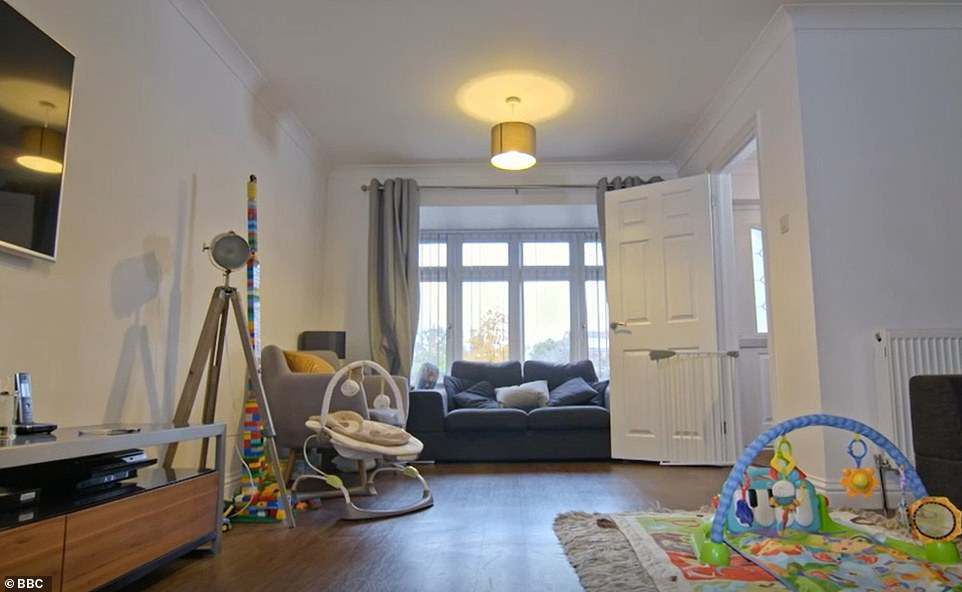 Thoroughfare: Before, the living room (pictured) was treated as a hallway between the front of the house and the kitchen 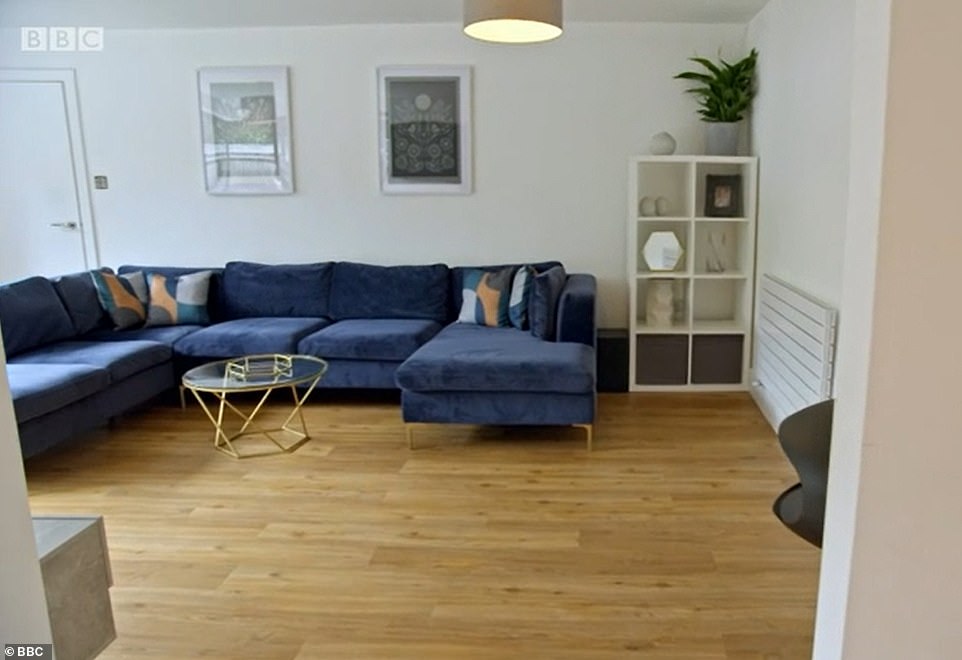 Tucked away: The horseshoe design allows for Victoria and Raheel to have their own ‘wing’ (pictured) for grown-up time

Victoria and Raheel bought the four-bedroom, 90s build on a ‘cookie cutter’ development in Milton Keynes with the view of starting a family.

It was described on the show as an ‘estate agent’s dream’ with a south facing garden, generous sitting room and glossy new kitchen.

But when their boys came along, Victoria and Raheel began to spot the flaws in the design, with a cramped hallway, dark living room and an impractical kitchen top of the list of issues.

When their daughters were born, the couple added two bedrooms in the loft to account for their growing family but didn’t know how to improve the downstairs living space. 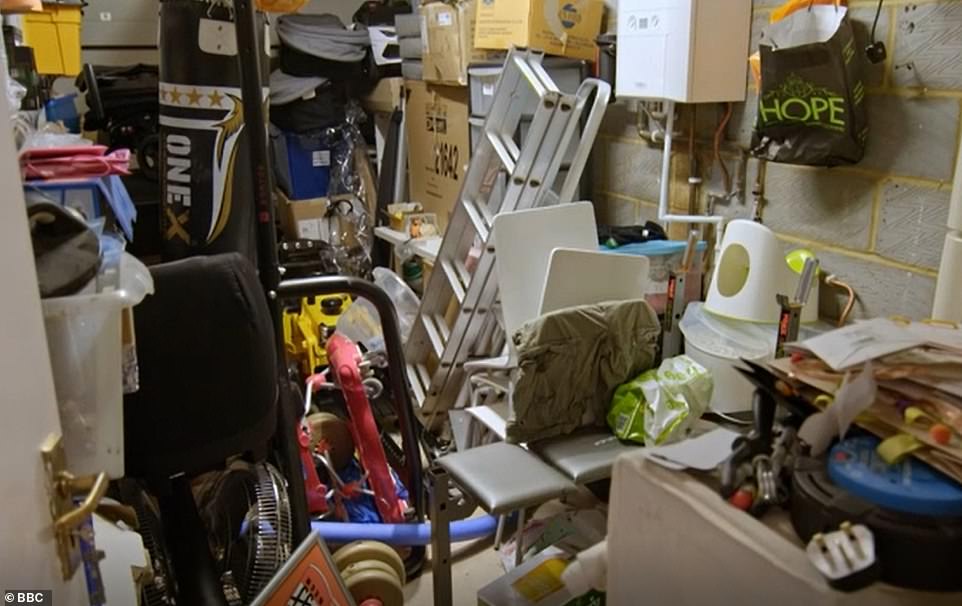 Cluttered: The lack of storage space in the house meant the couple were forced to use their garage instead (pictured) 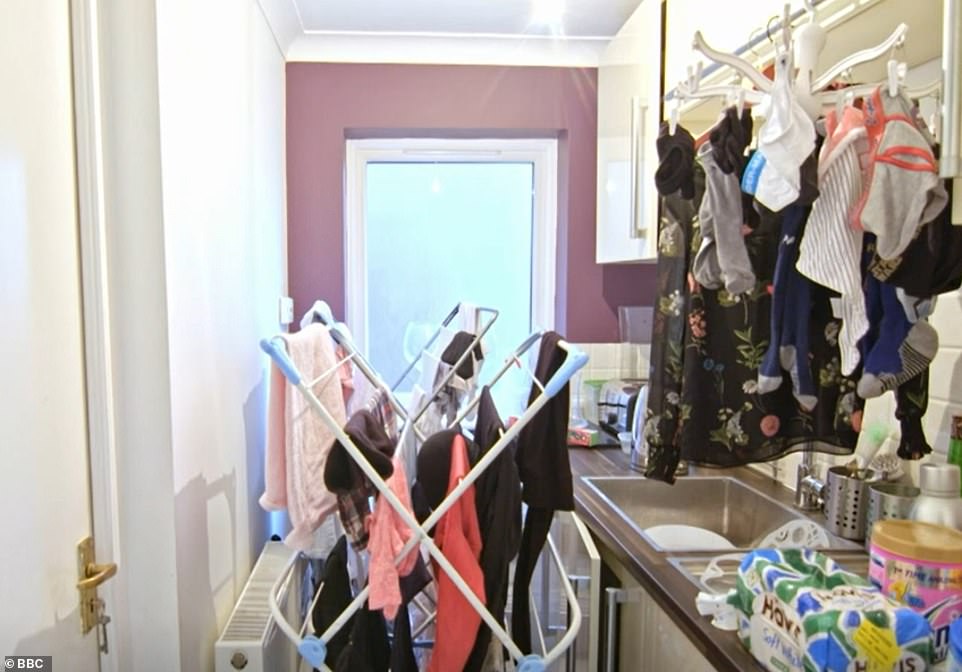 Cramped utility: The 5sq m utility room at the back of the original kitchen (pictured) acted as a pantry and laundry room. The couple also kept their kettle and toaster in the room (seen in back corner) due to the lack of kitchen space 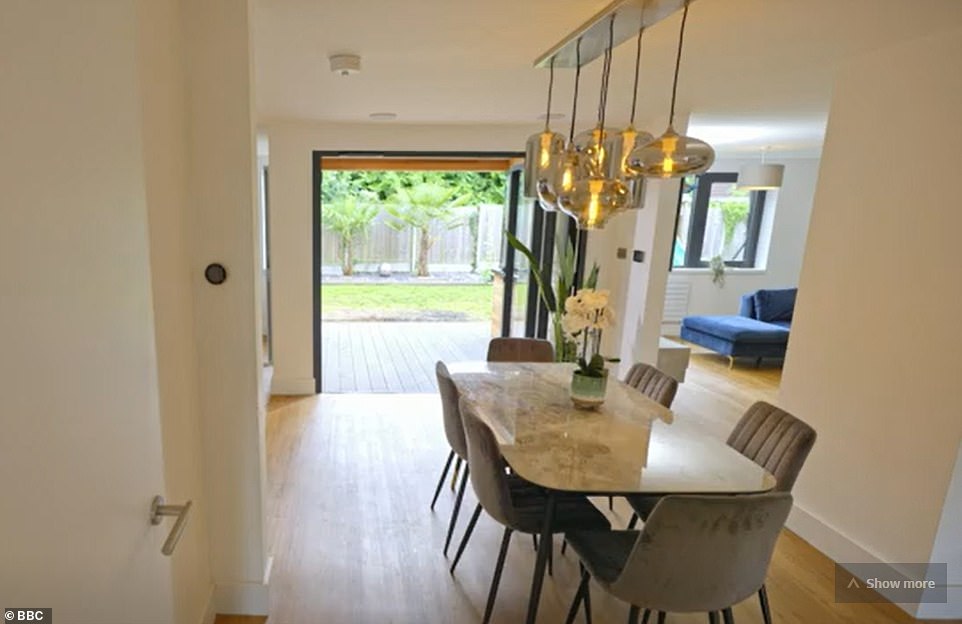 Opened up: The redesign (pictured) took away the utility room and garage to create a bigger, more unified living room

One of the biggest problems was the kitchen, which had so little counter space that the kettle and toaster had to be moved into the already packed utility room.

Raheel said: ‘Although it looks nice, it’s not actually functional. We’ve got no worktop space. When you’re cooking, there’s no room to put anything down. You end up juggling things.’

The couple were shown two radically different potential designs from Damion and fellow architect Will Foster, and ultimately chose Damion’s.

His design involved adding a 10sq m extension to the space at the back of the house and flipping the layout to create a ‘horseshoe’ shape that allowed in more light. The space was built around the central family dining space and incorporated a much-needed separate ‘den’ for the children, and adult space for Raheel and Victoria. 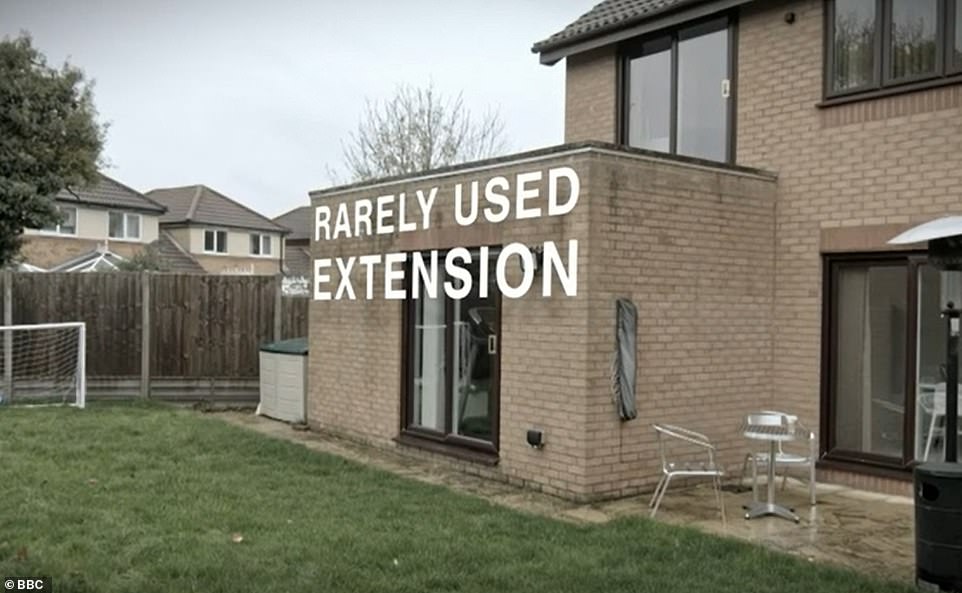 Bad use of space: The house had an extension at the back (pictured) but it was rarely used by the family 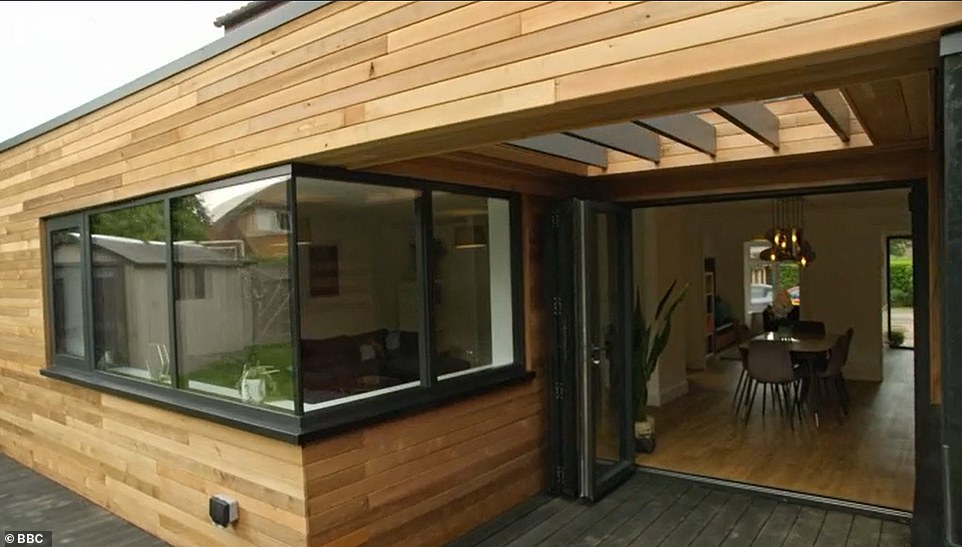 Transformed: The original extension was torn down and replaced with a wood-clad structure with wraparound windows

By taking away the garage, which had previously been stacked high with clutter, Damion also took back enough space to allow the couple to add a larger entrance hall that made family life far easier.

During the build, the couple also upped the specifications of the build and expanded the work to take in the roof, which in turn pushed up the amount spent.

But they explained it was worth it. ‘We got exactly what we wanted,’ Victoria said, reflecting on the overspend. ‘If we saw that design and we knew it was £100,000, we would have still gone for it because that was the house we wanted and that’s how we wanted to live. It’s been worth every penny.’

She added: ‘It feels like we’re totally living a different life. And it is joyous, completely.’