Cloned British passports using identities stolen from genuine documents are being touted for a few hundred pounds on websites available with a Google search.

The Mail was offered a British passport that bore the name, photograph and date of birth of 61-year-old barrister Aris Nicolson.

The married father of two was horrified to discover that his identity had been harvested by criminals to be sold on. His passport has never been lost or stolen, and his details are believed to be taken when he provided it as a form of identity either in the UK or abroad, possibly when the passport was photocopied at a hotel reception.

Disturbing: Aris Nicolson and his passport (left) and a copy of the fake one for sale online

Security experts warned that getting hold of a cloned passport was like ‘gold’ to terrorists and criminals, allowing them to assume the identities of law- abiding citizens to fraudulently get jobs, open bank accounts and even travel in and out of the country untraced.

The fraudster who created a passport bearing Mr Nicolson’s details was touting for business on several websites easily available following a quick Google search for a British passport.

After posing as a potential buyer, we contacted the conman, who called himself Steve, via a website before the conversation moved to encrypted messaging application WhatsApp.

To prove the quality of his work, Steve sent images of a passport he said had been created by his ‘technicians’ for a ‘client’ for £1,100. He bragged that it showed that ‘business is good’.

When the Mail tracked down a shocked Mr Nicolson, from Windsor, Berkshire, he said: ‘It’s disturbing. I’m an innocent victim of something that is becoming a pandemic.’

It is unclear when Mr Nicolson’s details were taken. He has been abroad six times in the past year – to St Tropez twice, Paris, Sicily, Abu Dhabi and Dubai.

In Sicily and Abu Dhabi he had to hand over his passport at the hotel, but not on the other trips and he didn’t use it for anything such as car hire. 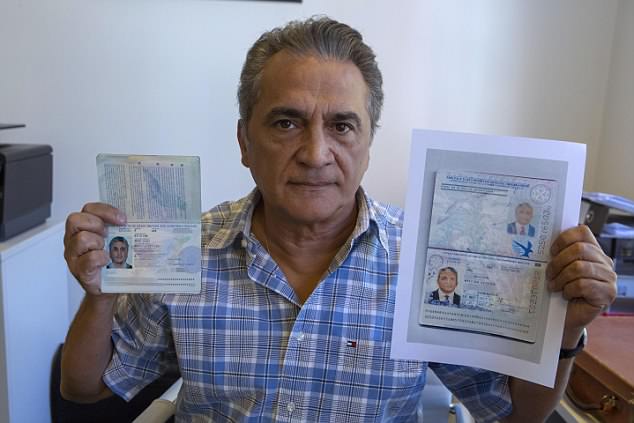 Undercover Mail reporters were offered a British passport that bore the name, photo and date of birth of the 61-year-old barrister

He keeps his passport locked in his desk drawer at home when he doesn’t have it with him. Other than that, he used his passport when enquiring about car finance two weeks ago and for a mortgage renewal on a buy-to-let three months ago.

Mr Nicolson, who specialises in tax and immigration cases, now fears the worst – including being stopped from travelling abroad.

‘Obviously it’s outrageous that someone claims to be selling this document.

‘We live in a world of identity fraud and theft. The authorities don’t seem to know what to do about it. And I think unless credit rating agencies and other such-like people put in a place of policy that stops all this, it’s going to continue, isn’t it?’

‘Anybody could be using my identity for crime or fraud. It’s completely disturbing.’

Worryingly, the forged passport which Steve claimed to have included Mr Nicolson’s correct middle name – something he believes could only have come from a stolen document.

Bizarrely, it was included as his first name – and his given name used as his surname.

He said: ‘Not many people know my middle name, they have just got it the wrong way round. I’ve handed my passport over when going for car finance or a mortgage so if the copy has been stolen at that time then that is very worrying.

‘Unfortunately identity theft has become easy for anyone to do. But you have to have that guilty intent. You’ve got to be of that ilk, that mindset.

‘The internet breeds this sort of offence unfortunately.’

Steve also provided images of two further British passports allegedly created in the name of a British man and his Thai-born wife. 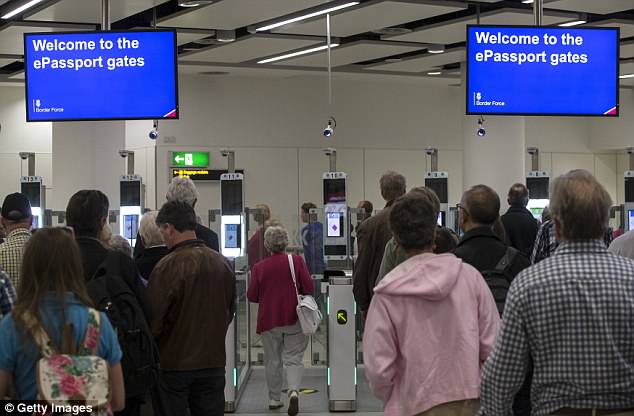 And he provided images of a French woman’s passport, accompanied by a handwritten note featuring his British mobile phone number and the day’s date to prove authenticity.

Steve agreed to sell the passport for the equivalent of £2,200 in a Bitcoin transaction. When queried over an expiry date of 2016, he said many clients accepted recently expired passports because they can then renew the documents at the embassies of their countries in Britain to get hold of fresh, legitimate versions.

Passport renewals at the London-based French consulate require only an identity photo and proof of address, according to official guidelines.

The Mail also discovered passports for sale on the ‘dark web’.

The most expensive guaranteed travel as it was allegedly issued ‘directly from corrupt immigration police contacts’, and was available on a first-come, first-serve basis.

Another website asked potential buyers to state their age and gender or provide a photograph. This is so fraudsters dealing in stolen passports can match their documents more closely to the buyer.

A Mail reporter struck up a conversation over secure messaging app Wickr with one passport dealer who had posted on the dark web. Wickr is favoured by criminals because messages are automatically deleted after a period of time.

The man said he was based in London and could obtain fraudulent passports bearing any required details for £3,500.

Professor Anthony Glees, a security and terrorism expert at the University of Buckingham, said: ‘For at least a decade it’s been very easy to get hold of fake British passports, not least in the UK.

‘I was told by a Whitehall source that they knew of garages in south London crammed with British passports.

‘You can pick them up all over the UK. This is seriously worrying, especially because there is no evidence that we have the machinery in place to be able to distinguish between real passports and fake ones.’

Patrick Martin, a cybersecurity analyst at dark web firm RepKnight, added: ‘Anybody can access the dark web – it’s not difficult.

‘Most people don’t dive into the dark web because they’re worried that by accessing it, their actions may come back to haunt them.

‘But if you’re a criminal hell-bent on buying fake documentation, it won’t take you more than ten minutes to find what you want because of the sheer amount of stolen identities for sale.’

Mr Martin added: ‘It really is child’s play – and as more and more vendors on the dark web accept Bitcoin for payment, buyers can benefit from an enhanced level of anonymity.’

The dark web is accessed using a special browser and users have to be alert to the URLs of ever-changing ‘websites’, which appear as random lists of letters and numbers.

Three main marketplaces used by those on the dark web sell everything from drugs to identity documents to weapons. 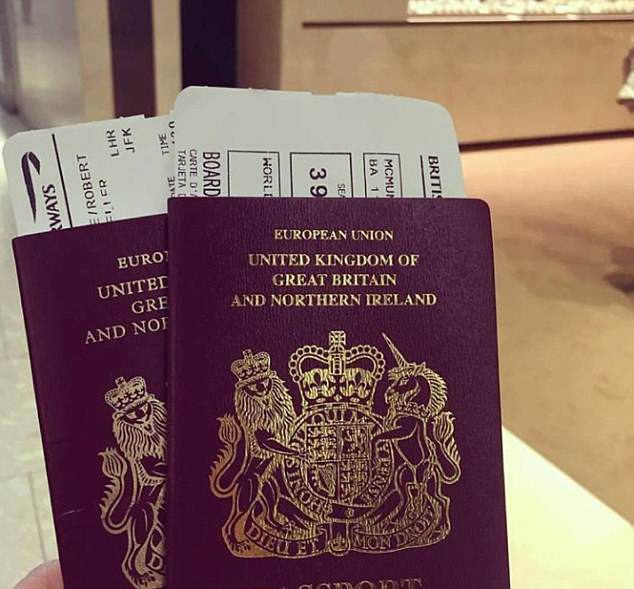 On sale: A picture on social media advertising British passports to customers for as little as £800