The Liberal Democrats were labelled ‘morally corrupt’ by a former party activist on Question Time last night as deputy leader Sir Ed Davey was accused of being a Brexit ‘hypocrite’.

Sir Ed was savaged by two audience members who were furious at the Lib Dem’s promise to scrap Brexit without holding a second referendum.

Jo Swinson, the party’s leader, confirmed earlier this week that should the Lib Dems win a majority at the next general election they would cancel Brexit on day one of being in government.

Sir Ed insisted that the party does still want a so-called People’s Vote on the UK’s departure from the European Union but that an election now appears more likely.

But his claim that the Lib Dems ‘would have a democratic mandate to stop Brexit’ if they campaigned on a pledge to revoke Article 50 and were then returned as the largest party at an election sparked anger.

One member of the audience on the BBC show said he had campaigned for the Liberal Democrats in the 1990s but he was now ‘appalled’ at the party because of its approach to Brexit.

He told Sir Ed: ‘I come from Christchurch and in 1993 I helped campaign for the Liberal Democrats to win a by-election and one of the reasons was they would hold a referendum.

‘I am appalled by your stance now. You have lost your moral compass. I can’t believe what has become of the party. It is just morally corrupt.’

Sir Ed Davey, appearing on the BBC’s Question Time programme last night, said the Lib Dems had been ‘clear’ for a long time that the party is against Brexit 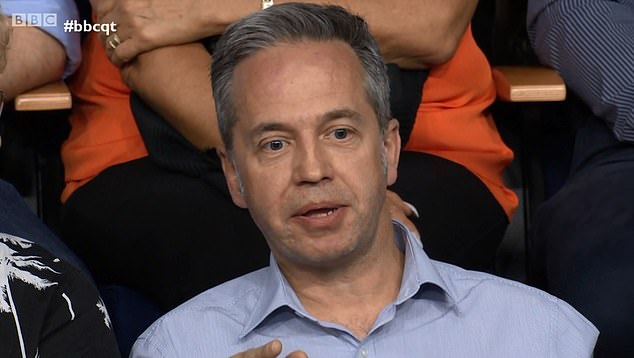 But this audience member, a former Lib Dem activist, said he was ‘appalled’ at the party’s new policy of revoking Article 50 without holding a referendum

‘We still want a People’s Vote. We want you the people to have the final say on whether Brexit should go ahead.

‘What we have said in the latest position is if the other parties prevent that referendum from happening… and we have to have a general election then if we win a majority, and I accept it would have to be a political earthquake for us to win a majority, but if it happened we believe we would have a democratic mandate to stop Brexit on day one.’

Sir Ed was asked if the Lib Dems had abandoned Leave voters who may have voted for the party in the past. He rejected the suggestion.

‘Of course not,’ he said. ‘There are many, many people who believe that Brexit needs to come to a head either way.

‘What they are saying to us is, whatever happens just get it done, just move on so we can get on with our lives and we can get rid of this appalling Conservative government.’

But Sir Ed’s comments prompted a furious response from another audience member. 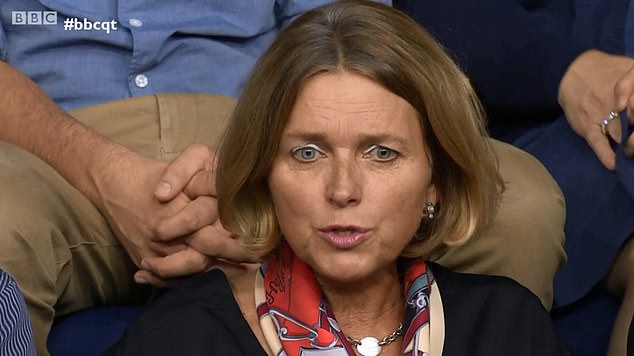 She said: ‘Ed Davey, how you can have the hypocrisy to say what you do when it is parliament who has caused the chaos. It is not the Brexit voters, it is not the Conservative Party, it is people like you.’

She added: ‘Mr Davey, you have to understand that we are all looking at you as hypocrites. You were in coalition in the government that legislated for the referendum and you were quite happy to take your seat at the top table with the Tories between 2010 and 2015.’

Sir Ed dismissed the suggestion that the Lib Dems were to blame for the Brexit chaos as he pointed out the party only has 18 MPs.

‘We started off this parliament with 12 Liberal Democrat MPs,’ he said.

‘We have now got 18. I don’t know about your maths but in order to stop the government you would have to have a large number of people.’