Manchester United and Nottingham Forest will contest the FA Youth Cup final in front of a record crowd of 65,000 at Old Trafford on Wednesday night.

It’s the first time United have reached the final of the prestigious competition since 2011 and they are seeking to win the trophy for the 11th time.

Forest, meanwhile, are appearing in their first-ever final, having impressively seen off Chelsea in the semi-finals.

Ahead of the game, Sportsmail picks out five players from each team to keep an eye on in the final.

A name becoming increasingly familiar to every United fan after he came on to make his senior debut late in the recent 1-1 Premier League draw with Chelsea.

That came after Ralf Rangnick promoted the 17-year-old Madrid-born Argentine winger into the first-team squad in recent weeks.

Garnacho has even been called up into the Argentina squad, training alongside Lionel Messi back in March although he has yet to represent La Albiceleste.

Alejandro Garnacho (second left) with Alex Telles, Bruno Fernandes and Fred in first-team training after Ralf Rangnick promoted him into the senior squad 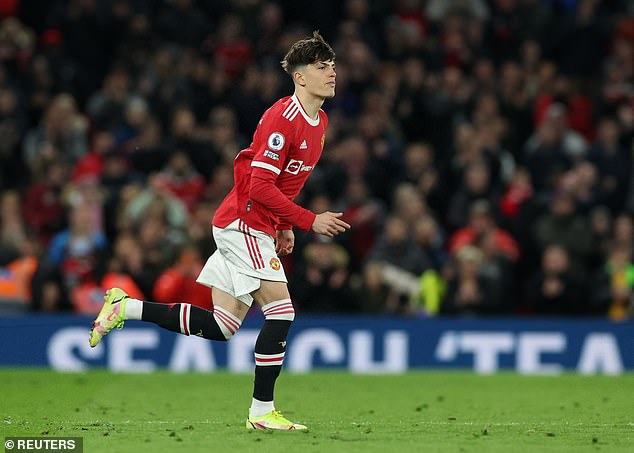 The hugely talented teenager plays for United’s under-23 team regularly now but has illuminated the Youth Cup run with five goals.

Against Everton, Garnacho collected the ball deep inside United’s half before embarking on a 60-yard run before finishing with composure, while against Scunthorpe he netted with a bicycle kick in front of the Stretford End.

In the quarter-final with Leicester, he came up with an 89th-minute winner after earlier scoring a 25-yard free-kick. On both occasions, he celebrated by copying the trademark ‘Siu’ celebration of his idol Cristiano Ronaldo. 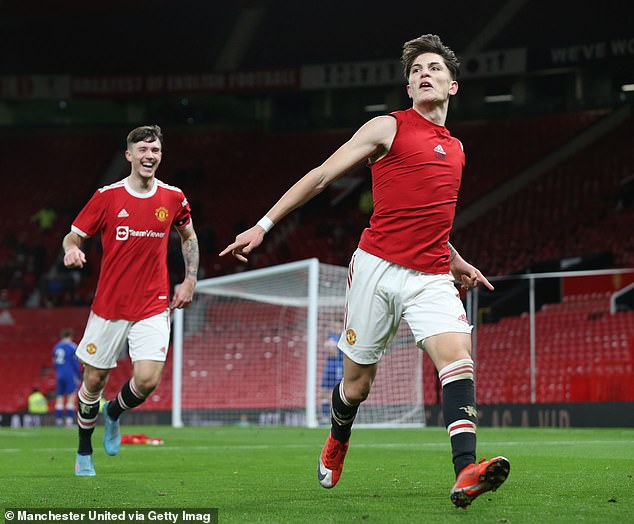 The 17-year-old, who has been called up by Argentina, celebrates scoring against Everton 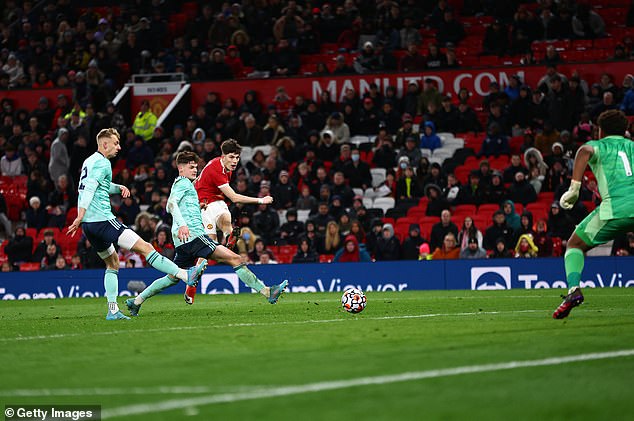 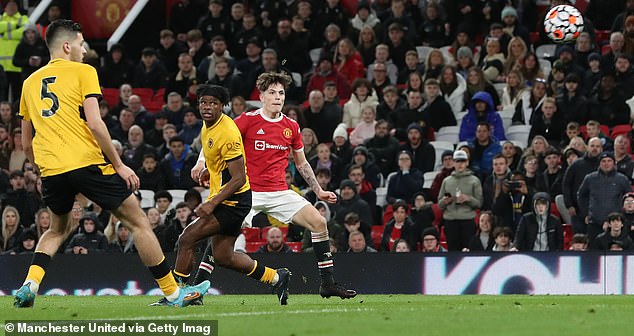 Live on The FA Player and MUTV

Against Wolves in the semi-final, he entered into a foot race with the defender and, realising his route to goal was blocked, stepped inside instead to curl the ball into the far corner.

Signed from Atletico Madrid two years ago, Garnacho combines speed and an assured finishing ability, making him perfect as the kind of wide forward United really like.

The 17-year-old midfielder is regarded as one of the most talented players in his age category in England and has also impressed during the Youth Cup run.

Given that United have long lacked a top class player in his position, they’ll hope to press the fast forward button on his development once Erik ten Hag comes in.

Mainoo is a local lad, hailing from Stockport, loves a little nutmeg and there’s a lot of excitable chatter that he’s the best midfielder United have produced in quite a while. 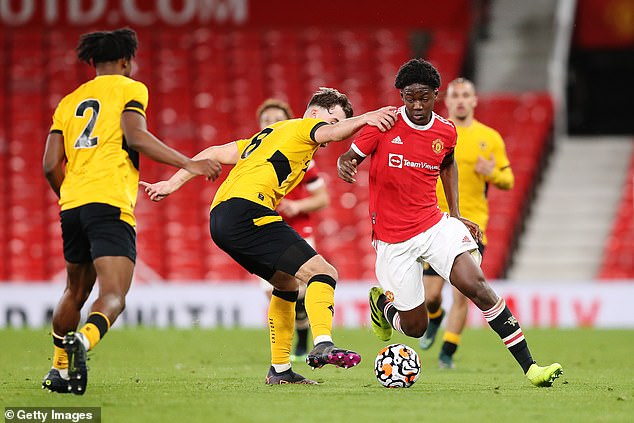 He certainly makes the game look effortless at times, driving the side on when needed and he has a good understanding with Daniel Gore in the middle of the park.

Eligible to play for England and Ghana, Mainoo received his first taste of international football for the former’s under-17 team in European Championship qualifiers against Armenia, Belarus and Slovakia last October.

Already very much known as the kid who scored an astonishing 600 goals at youth level, there is absolutely no doubt that 18-year-old McNeill knows how to finish.

That much was evident as he netted twice against Wolves, adding to his strikes against Scunthorpe, Reading and Everton in early rounds of the competition.

Hailing from nearby Droylsden, McNeill was originally in United’s academy before making the switch to Manchester City in 2014. In their under-15 side, he scored a stunning 110 goals in 72 games, setting up a further 38. 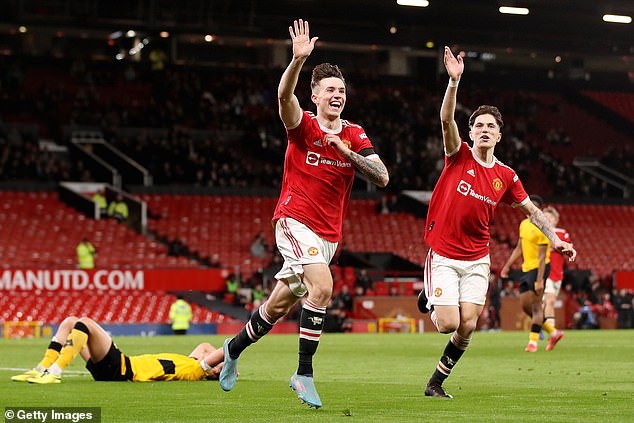 There was interest in the prolific striker from all around Europe – including Juventus and RB Leipzig – but United were determined not to let him slip through the net and paid City £1million to get him back in 2020.

A sign of McNeill’s potential is that he already has a long-term sponsorship deal with Adidas worth over £1m and there seems to be no ceiling on a player who now plays regularly for the under-23 side.

McNeill has 17 goals in total this season across the under-18, under-19 and under-23 age groups.

The right-back made the bold decision to leave Barcelona’s academy after nine years, turning down the offer of a contract extension, and sign for Man United in 2020.

When in Barcelona’s under-10 side, Jurado once scored a goal after merely five seconds of a match, believed to be the quickest of any of the club’s teams at any level. 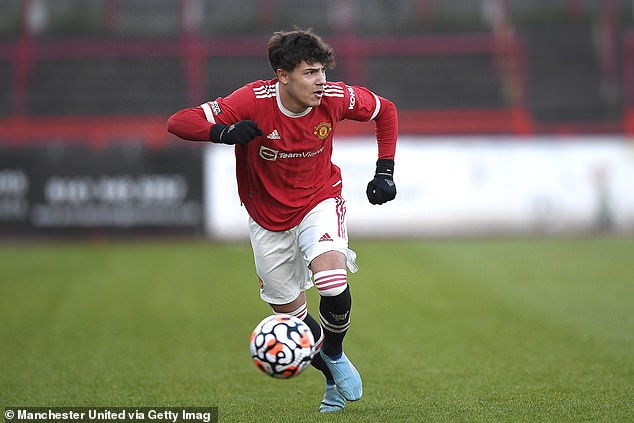 United paid £1.5m to sign him and Barcelona were disappointed to see him leave but Jurado continues to develop well, signing a first professional contract in April last year.

In modern times, players of his mould need to be as comfortable as a right winger as they do a right-back and he ticks both boxes.

As well as being an ever-present in the Youth Cup run, Jurado has played for both the under-18 and under-23 sides.

Local lad from Salford and another to copy Ronaldo’s ‘Siu’ celebration following a goal against Leeds United under-18s back in August.

The winger, capable of playing on both sides, signed his first professional contract with United in September. 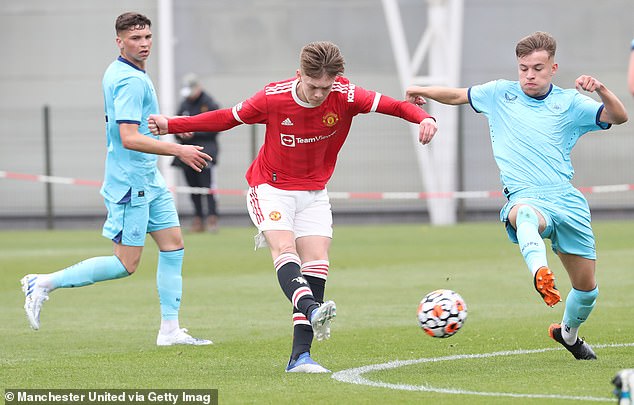 He has shone during the Youth Cup run, scoring in the early rounds against Scunthorpe, Reading and Everton, as well as setting up two other goals.

Called up to the England under-18 squad for the first time earlier in the season and already has a goal and two assists for his country.

A really dangerous centre-forward who United will undoubtedly have told their defenders to keep close tabs on.

The 17-year-old, who joined Forest from a Leicestershire Sunday League team in his early teens, scored twice in their 3-1 win at Blackburn in the quarter-finals and then netted the two late, decisive goals in the 3-1 semi-final win over Chelsea.

To his credit, Osong didn’t take the ball to the corner deep into stoppage time but instead drove on to win the penalty that he then converted for the match clinching third. 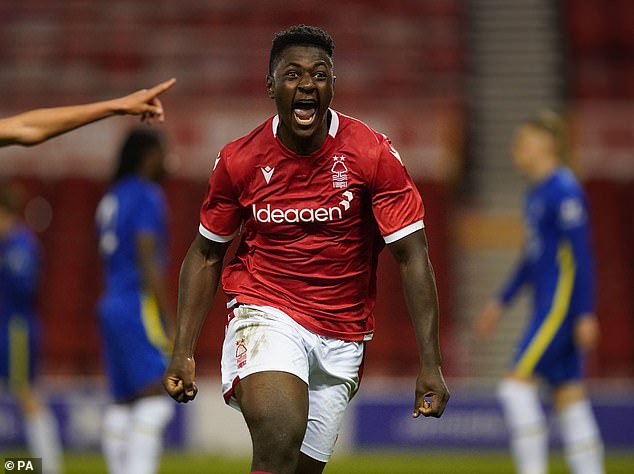 His form in Forest’s academy was rewarded with a first professional contract at the City Ground in September.

At the time, Forest’s head of coaching and player development Jody Caudwell, said: ‘We feel he has a bright future at the football club. Esapa has great potential in his position which he is displaying in training and in games week on week.’

That progress has been shown with a step up to under-23 level this season.

There’s already plenty of buzz around 18-year-old Taylor, the forward who won his first senior cap for Northern Ireland in their 1-0 World Cup qualifying win over Lithuania in November.

Forest beat Leeds United to the signature of Taylor two years ago, bringing him in from Northern Irish club Linfield and handing him a professional contract.

He was so highly regarded there, Linfield gave him his first-team debut at the age of only 15 and he scored his first goal for them a month later. 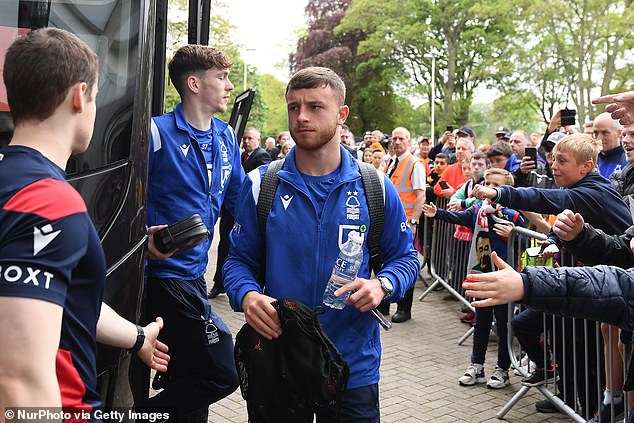 Taylor has figured for Forest’s under-23 side in the Premier League 2 this season and scored in the semi-final win over Chelsea.

Although Taylor is very much on the radar of Forest first-team boss Steve Cooper, he has been careful not to put too much weight of expectation on his young shoulders.

Last year, he said: ‘He has to strive to be a high performer in the under-23 side – which is no mean feat at his age.

‘And if he plays for the under-18 side, he has to try to stand out as one of the better players. We are really, really proud of him.’

The versatile defender is only 15 but doesn’t appear to be fazed by playing at a higher age group and has impressed in the Youth Cup run.

He also played for England’s under-16 team in the Montaigu Tournament last month, starting games against Holland and Brazil.

Abbott played centre-half for England but he can also play in both full-back positions should Forest need him to.

Under-18 coach Warren Joyce said of him: ‘He forced his way into our side through his performances in training. He showed a tremendous attitude, he has a tremendous desire to learn and push himself.’

Abbott favours playing on the front foot in wide positions and isn’t afraid of pushing forward, something first-team boss Cooper will certainly appreciate. 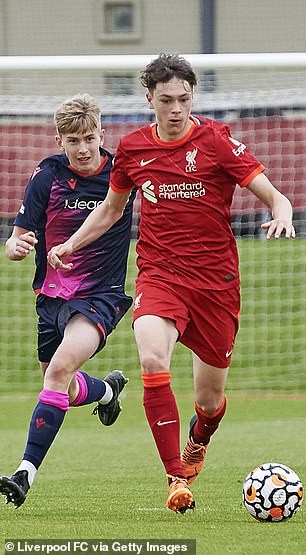 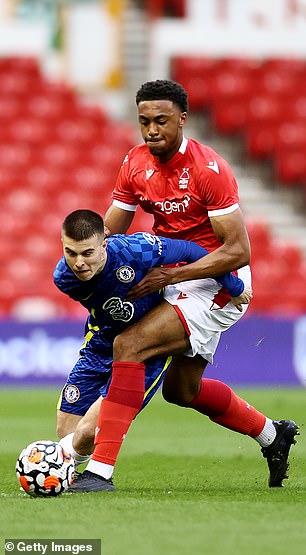 Forest’s youth team played three at the back in the semi-final with Chelsea with Johnson at the heart of it with Abbott to his left and Ben Hammond to the right.

Received a scholarship into the Forest academy in 2020 and was promoted into the under-23 set-up in October 2021, albeit in something of a baptism of fire as they lost 6-2 to Queens Park Rangers in the Premier League Cup.

Powell certainly knows his way around the pitch, having played as a left winger, left-back, defensive midfielder and up front this season alone.

The 17-year-old has played predominantly for the under-18s this campaign, including against Blackburn and Chelsea in the last two rounds, and has also had a taste of under-23 action.

That came off the bench in a 5-0 win over West Brom in Premier League 2 back in March, when Forest were missing a few regulars.

Having got that under his belt, Powell will look to press his case to make the step up at Old Trafford. 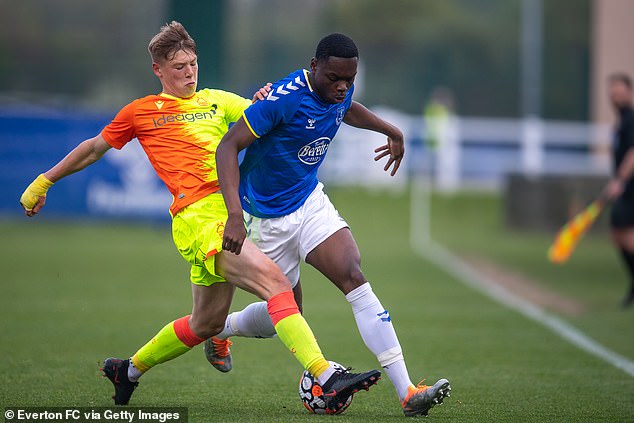 Jonny Brick has written a book chronicling the history of the FA Youth Cup complete with player recollections about the competition from the past 70 years.

From Kids to Champions, by Pitch Publishing, is released on May 16 and you can order it here. Jonny has provided Sportsmail with some facts and stats about Wednesday’s final: