In an earlier time, a true freshman starting quarterback wasn’t necessarily unthinkable. It certainly was an outlier.

Not so much anymore, not in this age of what Rutgers offensive coordinator John McNulty calls the “bred quarterback,” those players who immerse themselves in football year-round, get individual coaching from quarterback gurus and arrive on campus ready and expecting to play right away.

Three of the Big Ten’s six new starters were in high school a year ago. Now consider the Big Ten had only five true freshman quarterbacks start openers from 2003-17.

FILE – In this Aug. 3, 2018, file photo, Rutgers quarterback Artur Sitkowski works out during NCAA college football training camp, in Piscataway, N.J. In an earlier time, a true freshman starting quarterback wasn’t necessarily unthinkable, but it certainly was an outlier. Not so much anymore. Three of the Big Ten’s six new starters were in high school a year ago. (AP Photo/Julio Cortez, File)

Zack Annexstad will be taking snaps for Minnesota. Arthur Sitkowski will start for Rutgers against Texas State and Adrian Martinez for Nebraska against Akron.

With quarterbacks specializing at their position at younger ages and often skipping other sports, they show up with strong fundamentals and are well ahead of where freshmen used to be in their physical development. Once on campus, they must learn schemes, terminology and reads.

Much of that can be accomplished if – as Annexstad, Sitkowski and Martinez did – they graduate early from high school and enroll in January, which allows them to go through spring practice and get a jump on college life.

“They’re really not freshmen when they do that,” Rutgers coach Chris Ash said. “When you combine the early enrollment, all the training they’re getting year-round at that position, the game has changed. It really has. All those things combined, it has led to more young guys having an opportunity to compete and potentially play.”

Annexstad is the least heralded of the three freshmen. Though he transferred from West Mankato (Minnesota) High to the elite IMG Academy in Bradenton, Florida, as a sophomore – and beat out Sitkowski for the starter’s job there – he passed on scholarship offers from Cincinnati, Illinois and Pittsburgh to walk on to his home-state university.

According to Minnesota research, he’s believed to be the second walk-on true freshman quarterback to start a season opener in the Football Bowl Subdivision. Baker Mayfield, the 2017 Heisman Trophy winner and No. 1 overall NFL draft pick, started his first game at Texas Tech in 2013 as a walk-on before transferring to Oklahoma.

The Minnesota job was there for the taking. The Gophers had no quarterbacks with FBS game experience after Conor Rhoda graduated and Demry Croft transferred. A junior college quarterback was on the roster for a short time but left.

“You look at Zack and look at Tanner, that was an unbelievable quarterback competition,” Gophers coach P.J. Fleck said. “I have no problem putting (either) of them in the game. Not one problem. I don’t think we’d miss a beat at all.”

No concession will be made for the 6-foot-3, 215-pound Annexstad’s inexperience, Fleck said. “They’re expected to execute it at a very high level – no matter what year you are.”

“He went to a private school just to play quarterback, he’s pretty serious about the job and he’s got the physical attributes to do it,” McNulty said. “He should become the guy, unless it was too much for him or he wasn’t as good as we thought.”

McNulty said the 6-5, 224-pound Sitkowski has the look of a pro-style quarterback with his pocket presence and ability to throw the deep ball.

“Clearly it’s not going to be all smooth sailing at any point, but he’s got a tremendous amount of talent to do it and the right mentality to do it,” he said.

Martinez’s path was a bit different. He went to Clovis West High in Fresno, California, and played basketball as well as football. He also injured his shoulder his junior season and hasn’t played in a game since November 2016. Still, he was rated a four-star prospect and was the biggest signing in coach Scott Frost’s first Nebraska recruiting class.

Martinez said he expected nothing less of himself than to beat out redshirt freshman Tristan Gebbia for the starter’s job.

“Getting here in spring was essential for him to be where he is,” Frost said. “I think that allowed him to get used to college life, get used to campus here, get used to a little bit of the spotlight, get familiar with things around here. He’s going to need that maturity. There’s going to be a lot on his shoulders.”

The 6-2, 220-pound Martinez will take the reins of one of the all-time winningest college programs, yet the magnitude of the task doesn’t seem to faze him. Maybe youthful ignorance isn’t so bad.

“I don’t think it’s going to feel foreign to me out there,” he said. “I feel like that doesn’t really have any significance in my mind.” 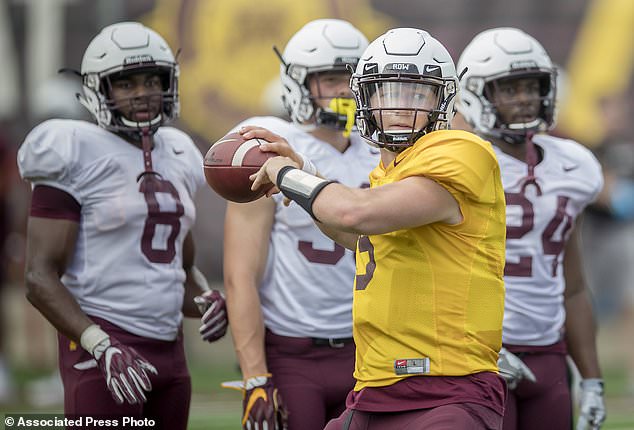 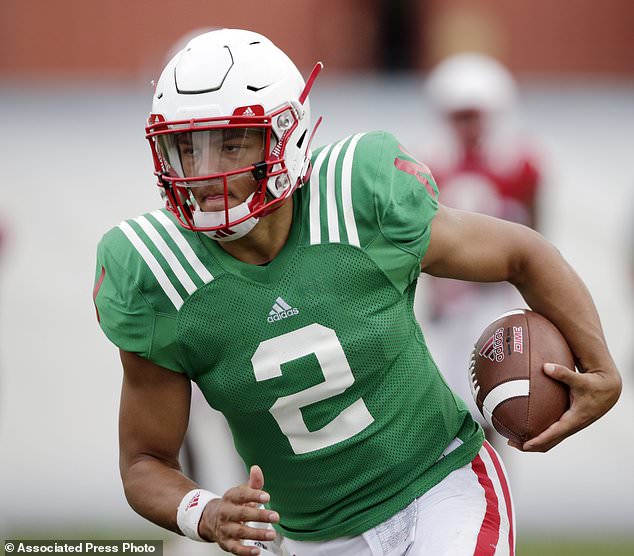