They have been hailed as a solution to our gridlocked cities, but the UK’s first trial of electric scooters has got off to a farcical start, The Mail on Sunday can reveal.

Youths flouted the new laws within hours of the powerful machines arriving in Middlesbrough, leading critics to accuse them of being ‘open to abuse’.

Youths flouted the new laws within hours of the powerful machines arriving in Middlesbrough, leading crDitics to accuse them of being ‘open to abuse’ 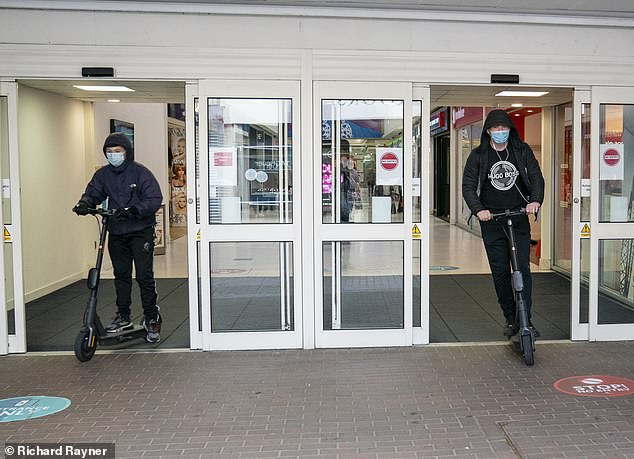 It was just one of countless disturbing incidents, including scooters being ridden on pavements, without helmets, and at their top speed of 12.5mph. Two youngsters were captured riding pillion, others were seen attempting wheelies while Cleveland Police had to issue a warning after pulling over two boys, aged 13 and 14, on the busy A19 dual carriageway.

It raises serious questions about the scheme because the overwhelming majority of riders were teens and young men apparently seeking a joy ride rather than commuters trying an alternative means of transport.

Personal injury lawyer Peter Kelly said: ‘The scheme is open to abuse and that is demonstrated by what is happening.

‘The police should crack down on it as soon as possible. The initial rush of kids abusing the scheme is going to have to be stamped on.’

The Government’s pilot scheme in Middlesbrough means people can now legally rent and ride the e-scooters on roads with a maximum speed limit of 40mph and in cycle lanes in designated areas.

Only people over the age of 18 with a full or provisional driving licence are allowed to hire them and it is recommended that riders wear a helmet.

A fleet of 100 orange and black scooters arrived in the town last week for hire at £2 per 20 minutes – done via a phone app linked to the rider’s bank account. It is being run by start-up firm Ginger and users are covered by insurance company Zego in the event of an accident.

However, this newspaper has discovered that checks are apparently not being made to confirm users’ age or identity, opening it up to misuse, as children as young as 11 can get a bank account with a debit card.

Anyone found driving irresponsibly can have their licence endorsed, face a fine or criminal prosecution. Legal experts say that if a rider caused injury or damage, they would be exposed to offences comparative with a car user.

It is unclear what would happen if a rider is underage.

The introduction of e-scooters on to UK streets has been marred with controversy after the death of YouTube star Emily Hartridge while riding one in London a year ago. Paris has about 20,000 e-scooters available for hire but is facing lawsuits from accident victims.

Despite that, the Government brought forward the trial to capitalise on people’s changing habits during the Covid-19 pandemic. A further 400 machines are set to be delivered to Darlington, Stockton-on-Tees and Redcar, while 50 local authorities have expressed an interest, including Bath, Bristol, Derby, Nottingham, Southampton, Portsmouth and the City of London.

Last week, Future of Transport Minister Rachel Maclean told Parliament that it was ‘not a done deal’ that the e-scooters would stay after the 12-month trial ends. ‘This is a very big market for e-scooter operators and we don’t want to rush into something that we may regret doing later,’ she added.

Supporters of e-scooters say they are a clean and cost-effective way to get around, and Tees Valley Mayor Ben Houchen has thrown his weight behind the project.

He said: ‘The first week of the pilot has been a great success overall, and the response from people in Middlesbrough has been overwhelmingly positive’, adding that the Tees Valley Combined Authority was liaising closely with Cleveland Police. Ginger did not respond when asked how it would verify the age of scooter users, but in a statement released on Cleveland Police’s Facebook page, company chief executive Paul Hodgins said: ‘The guidelines for using the scooters are clear both prior to, and throughout, the hire of the scooters.

‘The trial is performing well and we will continue to work closely with all regional partners during this test phase to ensure riders are aware of their responsibilities to themselves and other road users.’