A YouTube star and makeup guru has shared five of her top tips beauty and lifestyle hacks that she has gathered after working in the beauty industry for the past six years.

Casey Holmes boats a whopping one million subscribers on her YouTube channel as well as a Physicians Formula makeup palette.

And after spending a number of time in the world of beauty, the 27-year-old has gathered some quirky hacks, including using lace panties to remove deodorant stains from clothing and using a hand towel to remove dry shampoo residue from hair.

Beauty! 27-year-old YouTube star Casey Holmes (pictured) has revealed her must have makeup products and her top beauty-related hacks in an interview with FEMAIL

1. Use a hand towel to remove dry shampoo

Casey recommends removing the ‘white cast’ residue that comes with applying dry shampoo from hair by brushing a hand towel over hair at the roots to shake off any excess product.

If you happen to stain your dark-colored clothing with deodorant, a bizarre tip that Casey recommends and says that she uses ‘all the time’ is rubbing over the area with ‘lace panties’ to remove the residue.

Eyelids that become more oily throughout the day are something that many struggle with.

Luckily, Casey learned that applying a setting powder on top of eye shadow primer can prevent lids from becoming oily. She said: ‘You won’t get creasing throughout the day’.

4. Use a powder foundation to ‘carve out’ contour

Contouring involves exaggerating cheekbones to enhance the structure of the face.

After applying a dark shade of powder or bronzer to the face, Casey recommends applying a power foundation that is the same color as your skin to complement and enhance the dark shade and to help ‘clean everything up’.

If you’ve gotten a bouncy blow out, you usually want it to last more than one day.

To hold curls in place and prevent them dropping, Casey advises using a silk hair tie, rather than a regular elastic one that can cause breakage and creasing, to hold hair up in a loose top-knot while sleeping.

Speaking to FEMAIL, the Georgia native revealed that she decided she wanted to join the YouTube scene when she saw other women doing it and, ‘fell in love with the concept.’

‘I have been doing YouTube for so long it’s actually crazy to think about,’ she laughed, ‘but I wanted to do YouTube because I saw other women doing it and posting these videos where they just talked about makeup.

‘It really felt like we were in this fun group together gushing over products we loved and talking about ones that didn’t work out! 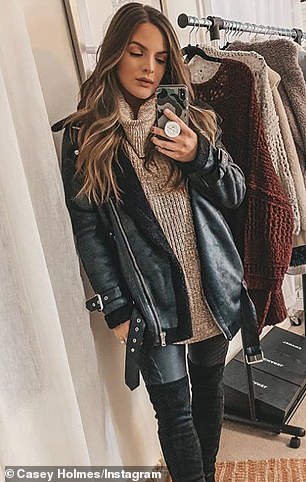 Internet-famous: The beauty guru began making videos in 2013, and regularly posts beauty and lifestyle videos to her 1,748,509 subscribers that she has garnered on YouTube

‘I really just fell in love with the concept and thought it was so cool and wanted it for myself! I haven’t turned back since,’ she added.

Since she started posting videos to the video sharing platform in 2013, Casey has garnered a whopping 1,748,509 subscribers who regularly tune into her videos to see what products she uses, as well as her tips and tricks for makeup and hair.

Casey said that when people ask her about the best ways to build up a makeup collection, she tells them to start with the basics.

She said: ‘I usually recommend getting a solid base down for your face products. Figure out how much you like to use and build off of that!

‘Some people only need a tinted moisturizer for their base, but others want primer, full coverage foundation, concealer, etc. It’s always good to experiment and see what works best for you and then build off of that,’ she added. 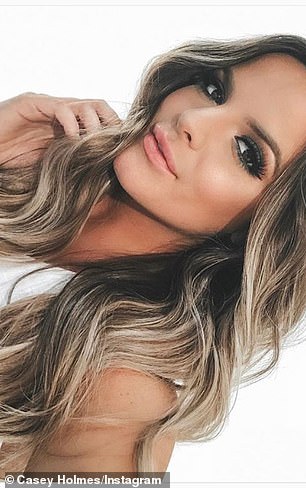 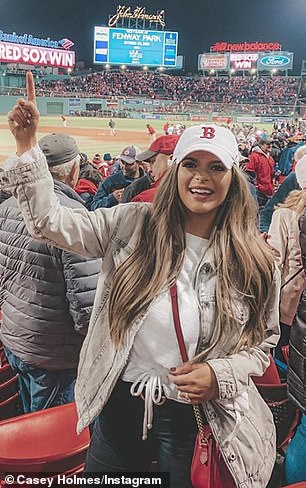 Influencer! The Georgia native said she was inspired to create videos and join the YouTube community when she saw other people doing it ‘fell in love with the concept’

Over the years, the beauty fanatic has even managed to create products of her own.

Her recent collaboration with Physicians Formula, came in the form of a makeup palette that contains products for the eyes, lips and face.

The palette sold out within a number of minutes of it being available on the company’s website on January 4.

However, Ulta has revealed that some stores will be stocking the palette from January 20.

Speaking about the Butter Collection X Casey Holmes Palette, which costs an affordable $19.95, Casey said that she specifically wanted to create something that could be used for both day and nighttime makeup looks.

She said: ‘I stuck with colors that are a little bit easier to work with but also threw in a few deeper shades in the eye shadows for a pop of color and to smoke out your look.’

She also revealed that she wanted the palette to be something that her followers and subscribers would enjoy, saying: ‘A lot of [my subscribers] are on the go just like I am and want something that is easy to use and wearable at the same time.

She added: ‘I have always been obsessed with the Physicians Formula bronzer and I fell even more in love with the limited edition Butter Highlighter shades when they came out [last year]. 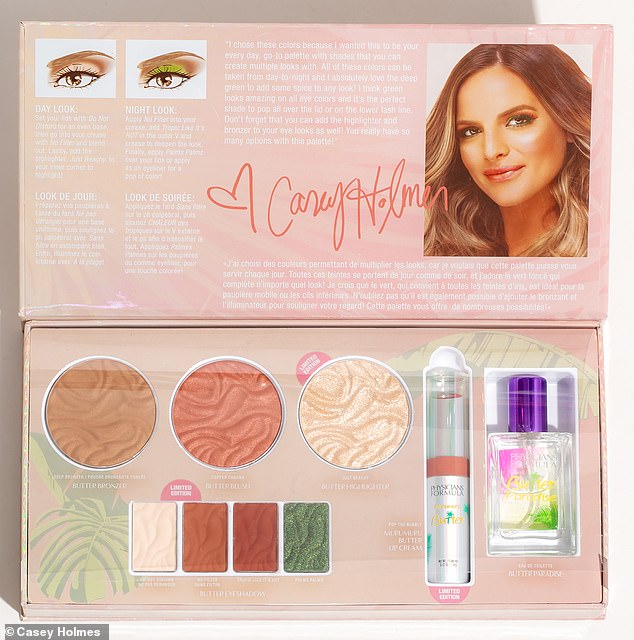 Sold out! Casey released a makeup palette with Physicians Formula that sold out within a number of minutes on the company’s website when it was made available on January 4

Despite her many successes that have stemmed from her presence online, Casey admits that she carefully chooses what she shares on the internet, saying that she always ‘thinks twice’ before posting something online.

She said: ‘I always think twice about what I’m going to post and don’t give into negativity. I feel like once you give in, it attracts it back to you.

‘I’ve been lucky enough to not experience a ton of hate, my followers are amazing, so that hasn’t been too difficult!

‘I love to have my “private” life, but also let followers in on certain things because I love having that connection. It’s important to know the balance and it took me a few years to figure it out, but I think I’ve got it down,’ she said.

The 27-year-old added that she likes to keep a lot of things about her family, friends and husband off the internet.

‘Normally I just really think about what I want people to know forever and ever, like “is this a good idea? Will it come back and bite me in the end?”

She added: ‘There’s so much to think about. I really keep my family, friends and a lot of stuff with Davis private because I cherish those relationships and enjoy having them to myself.’ 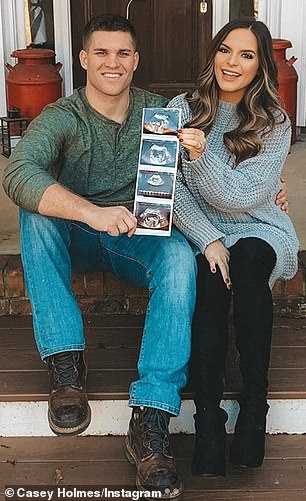 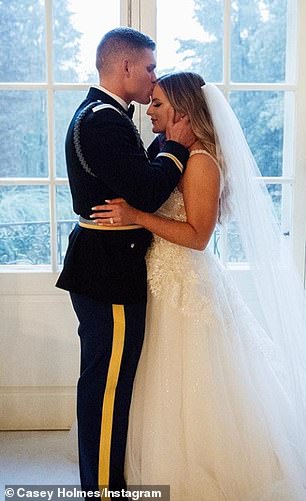 Private life: Casey revealed that, despite sharing a huge portion of her life online, she is selective with what she shares, saying ‘it’s important to know the balance’

After recently revealing that she and her husband are expecting a baby, Casey said that she will document her journey with pregnancy online.

She said: ‘I have a terrible memory so having a vlog channel and being able to document huge life events like this is perfect for me! We are very excited for 2019.’

Casey has been a well-known beauty influencer for over six years and was among the first of the many makeup fanatics to join the YouTube community.

However, despite the community becoming more saturated by the day with new, aspiring beauty gurus, Casey believes that there is always room for more people in the YouTube community.

She said: ‘Is it harder? For sure, but you have to be able to make yourself stand out. You can’t be afraid of the “what-ifs” – we have all been through it, and if you stick to it, the outcome will be so much greater than your fears.