A YouTube star who threw liquid at terrified pedestrians as part of a cruel ‘acid attack’ prank has been slammed by viewers online.

Arya Mosallah, 22, recorded a video which showed him ‘pranking’ passers-by by throwing water in their faces.

But his apparently harmless tricks come as a wave of fear over acid attacks sweeps the country.

Mosallah, who vlogs on YouTube using the name ItsArya, is seen spraying water at pedestrians in London.

In the footage he targets random members of the the public, engaging them in conversation before launching a spout of water directly at their faces.

But Viewers slammed Mosallah for making light of the wave of acid attacks that have swept the UK.

One commenter branded him an ‘idiot’ while Patrick W said: ‘With the increasing number of acid attacks on the streets of London, this video is anything but funny.’

Another commenter on the video said: ‘Considering acid attacks are increasingly common in London. This maybe isn’t the best idea…’

A third viewer writing under the username Jen remarked on how this prank ‘could be really scary with all the acid attacks going on at the moment’. 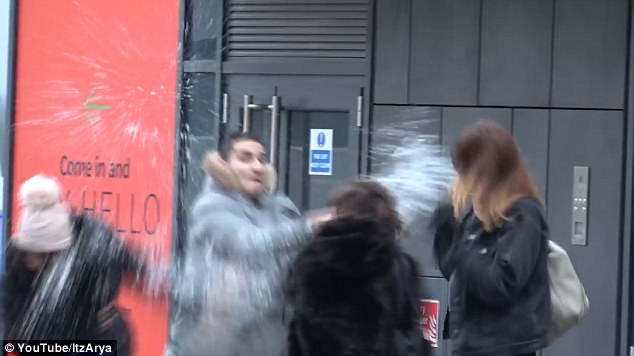 In the footage he targets random members of the the public, throwing the water then running 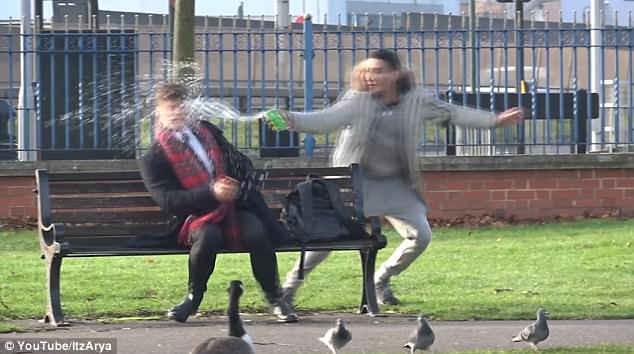 One commenter said: ‘With the increasing number of acid attacks on the streets of London, this video is anything but funny’

But Arya, encouraged by the success of his first video, went on to produce another.

‘So I thought I’d come back into London and throw more water at more people’s faces.’

Figures released by the Metropolitan Police found there were 431 acid attacks in London last year.

Sulfuric acid, which is commonly used in attacks, can be bought for as little as £10 online.

Previous ‘prank’ videos by the YouTuber include Stepping On Peoples Shoes, Stealing Peoples Hats and Chair Pulling In London.