A YouTube star’s chilling social experiment has revealed just how easy it is for predators to use social media to lure unsuspecting children into meeting up with them.

Coby Persin, 23, from New York, created three fake Snapchat profiles and struck up conversations with kids aged 12, 13, and 14 with their parents’ permission for his latest video exposing the dangers of the internet.

Although the parents insisted that they have warned their children about talking to strangers online, all three of the kids agreed to meet with the person they had been conversing with on Snapchat when their parents weren’t around.

Scary surprise: YouTuber Coby Persin (far right) created three fake Snapchat profiles to lure kids to meet up with him for his latest video exposing the dangers of the internet

A father named Steve had appeared in one of Coby’s previous videos, and after his daughter Mikayla was caught going to a park to meet a stranger she had been talking to online, he decided to see how his 13-year-old daughter Samantha would react in a similar situation.

Coby created a profile for a 15-year-old named Jackson and chatted with Samantha for three days while pretending to be a teenager.

Steve monitored the conversations using parental control monitoring software for cellphones, and he was shocked to see his daughter invite ‘Jackson’ over to their house after he left.

‘I am just hoping that she learns,’ he said. ‘I am just having a hard time understanding what she’s thinking.’

Coby had an actor — who doesn’t look anything like Jackson in the profile he created — knock on Samantha’s door to see if she would still answer. 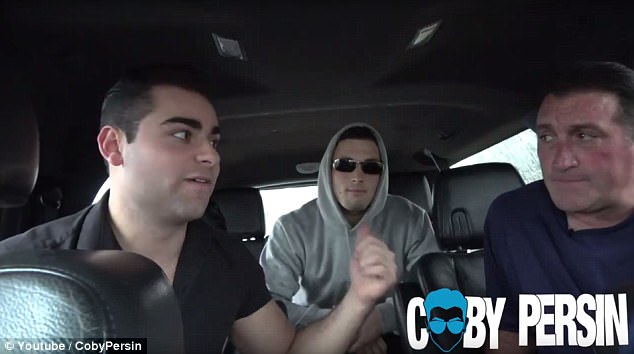 Disappointed: A father named Steve was shocked to learn that his daughter Samantha invited a stranger she had been talking to Snapchat with over their house when he wasn’t there 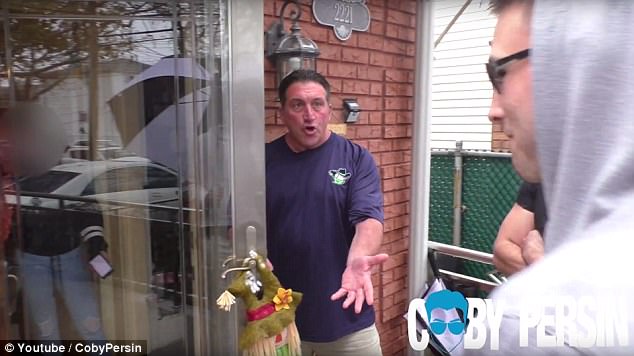 Angry: After Samantha opened the door for a stranger who didn’t look anything like the guy she thought she had been chatting with, her dad burst through to yell at her 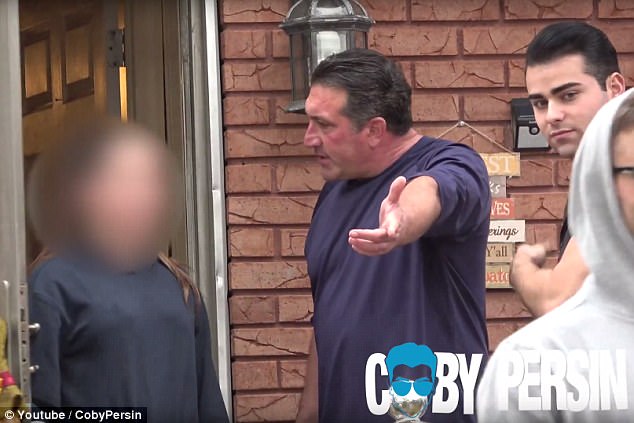 Lesson to learn: ‘Seriously Sam? This is not your friend,’ Steve warned. You don’t even know who this is’

‘Who are you?’ Samantha asked when she opened the door. The guy claimed to be Jackson, and she quickly noted: ‘You don’t look like Jackson.’

Steve was so angry that Samantha had opened the door for a stranger that he burst in behind the actor and started yelling.

Steve said they had already gone over this with her sister, so he couldn’t figure out why she would do something like this.

Samantha said she was just meeting a friend, but Coby pointed out that she fell for the same exact scam her sister fell for. 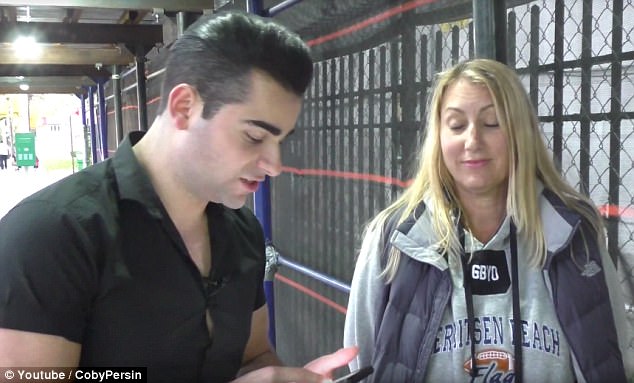 Worried: A mother of a 12-year-old boy named Daniel admitted she wasn’t sure if her son would try to meet the 13-year-old girl named Jessy that he thought he was talking to online 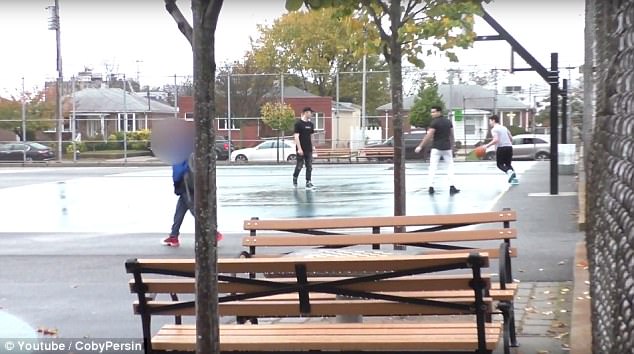 Bad choice: Daniel ended up showing up at the basketball court where they were supposed to meet, and Coby said he would who him where Jessy was 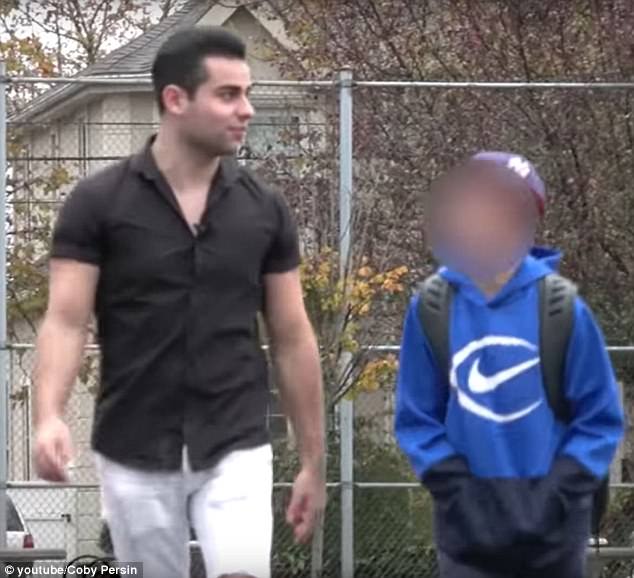 Dangerous: Daniel let Coby lead him off the basketball court and around the corner

Unsurprisingly, Steve took her phone away from her before he marched her into the house for a serious conversation about her actions.

Next up was Daniel, a 12-year-old boy who thought he was talking to a 13-year-old girl named Jessy on Snapchat.

Daniel’s mom hoped that her son would know better than to try and meet Jessy at the basketball court like they had discussed in their chats, but she had reservations that he would do the right thing.

Not only did Daniel show up to the meeting spot, he let Coby escort him off the court and around the corner because he claimed to know where Jessy was.

Instead of meeting Jessy, he ended up finding his very angry mother. 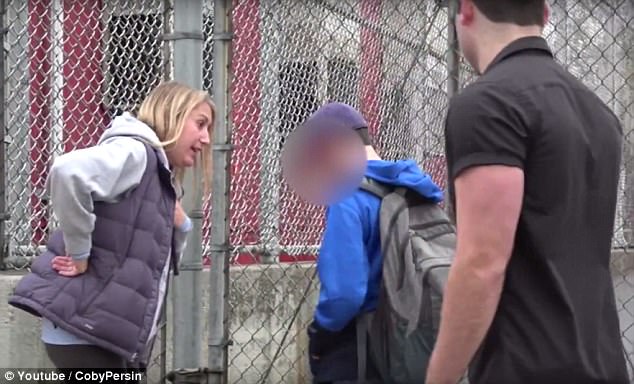 How could you: Instead of finding Jessy, Daniel was confronted by his angry mother 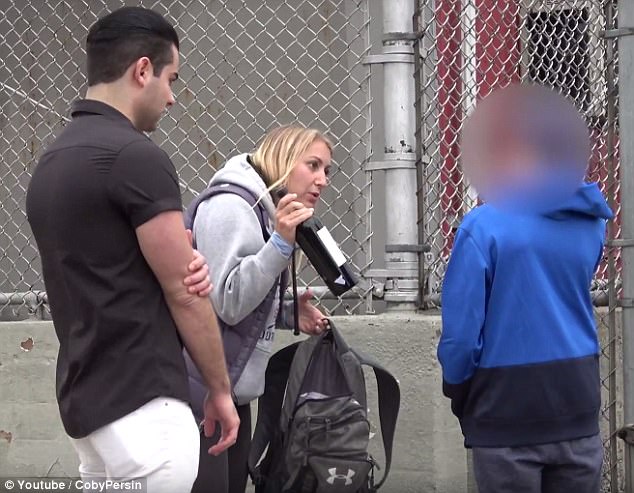 Double trouble: Daniel’s mom questioned why he was carrying a backpack, and when she went through it, she learned he had stolen a bottle of wine from their house 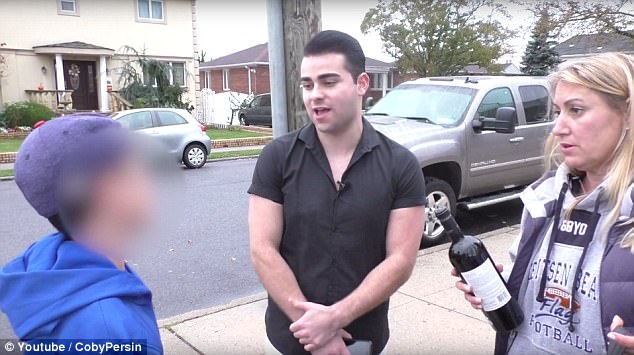 Grounded: ‘This could have ended a lot different,’ she said before demanding that Daniel give her his phone

‘Daniel you’re kidding me right? Are you kidding me?’ his mom yelled. ‘We set up a fake profile on Snapchat and you were stupid enough to go and meet someone you don’t know.’

His mom also found it suspicious that he was carrying a backpack to meet the girl, and when she opened it, she found that he had stolen a bottle of red wine from their house.

‘You don’t know better? Am I doing something wrong as a parent? This could have ended a lot different,’ she said before demanding that Daniel give her his phone.

For the final social experiment, Coby connected with a 14-year-old girl named Sasha after creating a fake Snapchat profile for a 15-year-old boy named Jackson.

Coby explained to Sasha’s mom that he had been speaking with her for a couple of days, and her daughter had already suggested that they meet in person. 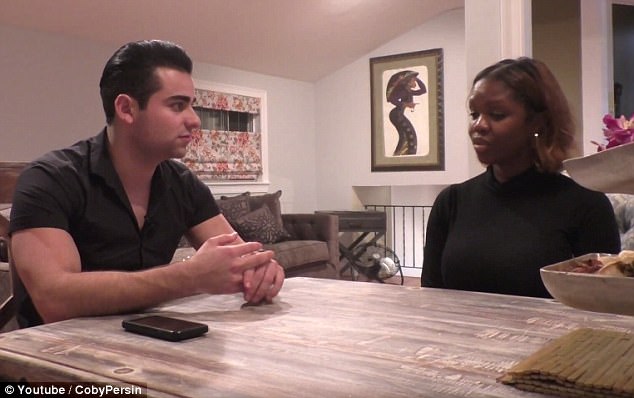 Blind faith: Coby also used a fake Snapchat profile to strike up a conversation with a 14-year-old girl named Sasha, whose mom was convinced she wouldn’t meet up with him 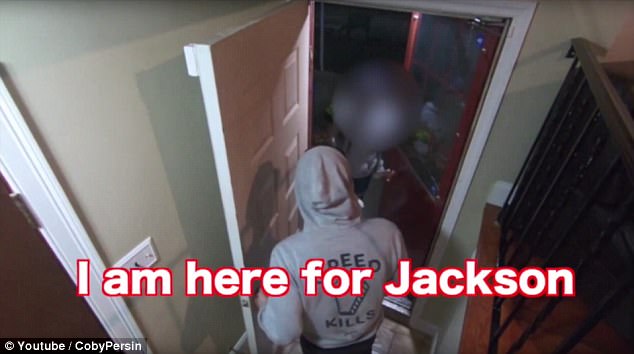 Danger zone: Sasha showed up at the address Coby gave her in the middle of the night and let a stranger lead her upstairs to wait for ‘Jackson,’ the guy she thought she was meeting 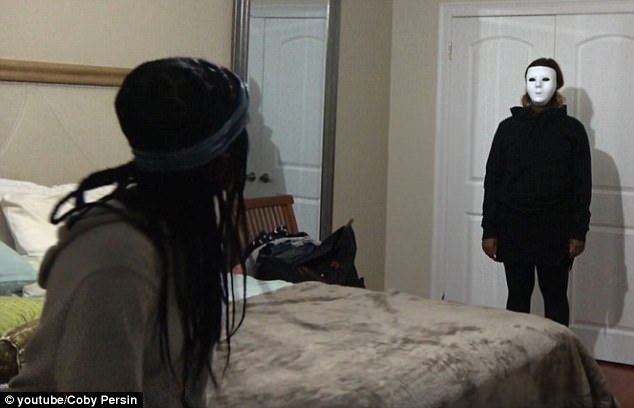 Terrified: Sasha’s mom scared her by standing behind her wearing a creepy mask

Because he didn’t have the house or cameras sets up at the time, he stalled for a couple of days before inviting her over that night.

Although it appeared that Sasha was more than willing to meet up with Jackson, her mom believed she wouldn’t show up because they’ve had discussed the dangers of speaking with strangers online many times before.

Even after Sasha told Jackson she would ‘be there in 10 minutes,’ her mother had faith that she wouldn’t show up.

Unfortunately, Sasha did show up, and when a stranger answered the door, she let him lead her upstairs to an empty bedroom.

The person told Sasha to wait there while Jackson was in the bathroom, and she did a quick look around before sitting down on the bed. 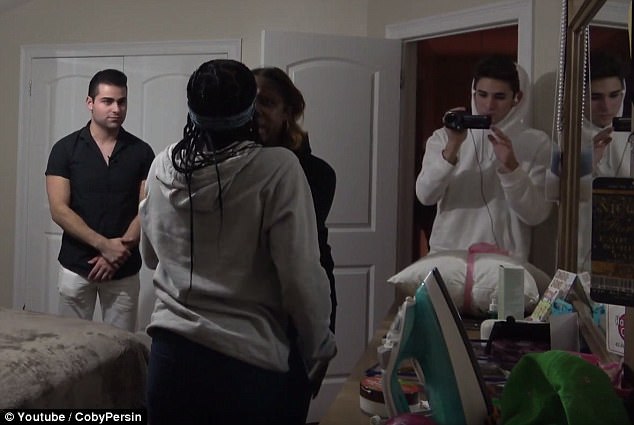 Scary moment: When Sasha screamed and tried to run out of the room, her mom grabbed her before revealing herself 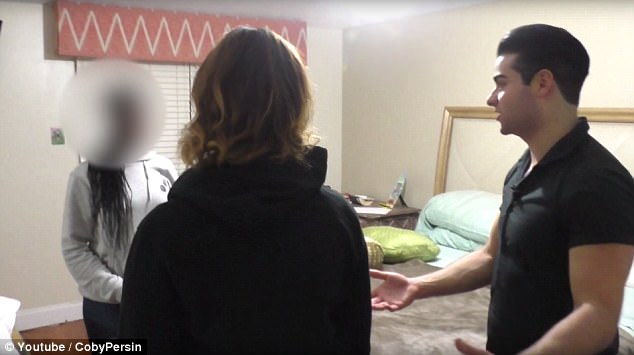 Upset: ‘Have I not taught you any better?’ Sasha’s mom yelled 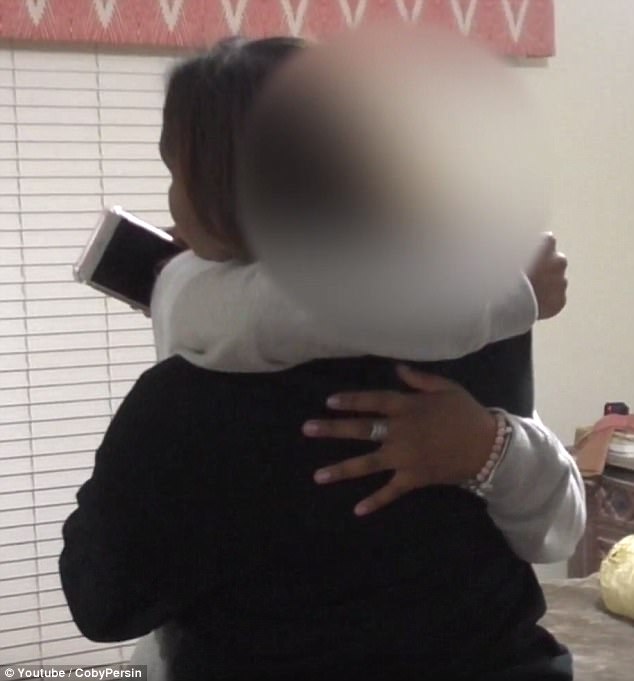 Motherly love: After she was done screaming at her, Sasha’s mom gave her a big hug and explained that she loved her and wanted her to do the right thing

After the lights flickered off and on, Sasha turned around to see someone in a mask standing next to the bed.

When she screamed and tried to run out of the room, the person grabbed her and took off the mask, revealing that it was her mother.

‘This could have gone a lot worse. Have I not taught you any better?’ the mom yelled. ‘What are you doing there?’

Sasha could barely get a word in edgewise while her mom continued to stress how much worse this could have been for her.

At the end of the clip, Sasha’s mom gave her a big hug and explained that she loved her and wanted her to do the right thing.