A 22-year-old YouTube star has shared the secrets behind her astonishing weight loss, having shed an impressive 45 pounds in just three months.

Remi Ashten, a Los Angeles native who boasts three million subscribers across her two YouTube channels, has opened up about her struggle to lose weight in previous videos, before happily revealing the diet and exercise plan that finally worked for her.

The YouTube star has also proudly showed off her svelte figure in a series of stunning images posted to her Instagram, including a recent bikini shot which she shared while thanking her followers for all their support. 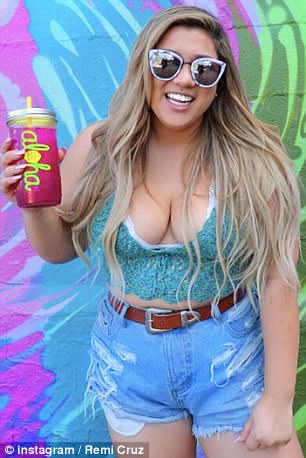 Transformation: YouTuber Remi Ashten has revealed how she lost 45lbs in just three months, pictured left this week and right in January 2017

Motivation: The blogger who has over two million subscribers to her YouTube channel explained that improving her health and not her looks has been her main motivation

In her weight loss video, Remi revealed exactly how she managed to drop so much weight in so little time, without resorting to drastic measures – explaining that consistency was the key.

‘This has been so highly requested and I just wanted to share with you guys, basically, some answers and things I’ve been going through on on this journey so far,’ she says at the start of the video.

‘About four months ago I decided that I wanted to change my life and live a healthier lifestyle and I’ve been sticking to it pretty much everyday,’ she added.

Acknowledging that 45 pounds is a lot of weight to lose in a very short amount of time, Remi told viewers that the key to her success has been maintaining a routine, and that she was able to keep herself going because she knew that she was losing weight, ‘the healthy way’.

She explained: ‘Losing weight in an unhealthy way is the last thing I want to do for my body and also for myself.’

Revealing that she has been asked lots of questions by her followers about her weight loss, Remi shared that the number one request from people was to find out how she stays motivated.

‘I can’t believe how many people ask this question,’ she said.

‘I started this whole health journey not for looks-wise, not to like “get super skinny” or anything like that. I started personally because I just wanted to improve my health, my cholesterol, my blood pressure, all of those sorts of things, like diabetes runs in my family, so it’s really something that I wanted to try and stay away from. So for me this is not like a diet, I’m changing my whole lifestyle.’

Admitting that it was hard to start in the beginning, Remi also revealed that once she got ‘into the groove’ and turned eating healthily and working out into a habit, her life changed.

‘Now I have so much more energy. Before I was always really tired and lethargic. I’m so peppy, I get up in the morning.’

Making a change: The blogger acknowledged that 45 pounds is a lot of weight to lose in three months but said she did it healthily, pictured left in November 2017 and right in April 2017 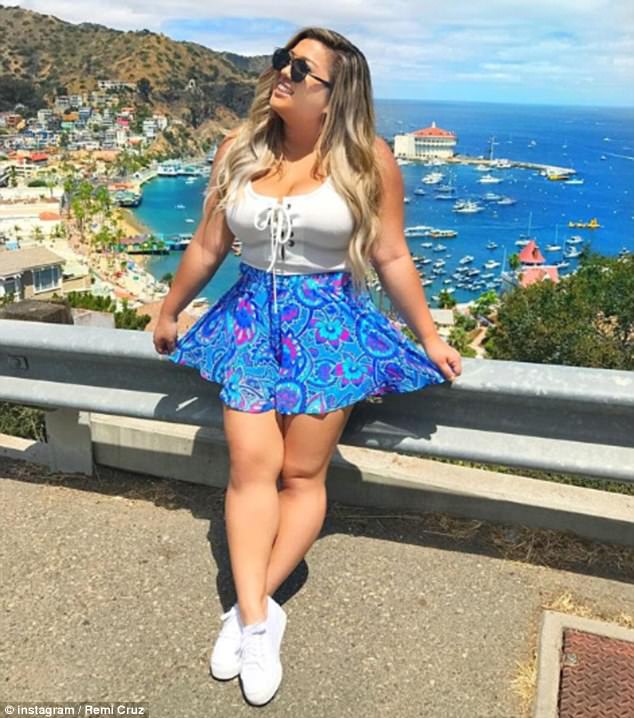 Happy: The lifestyle blogger, pictured in August, has always been confident about sharing images of herself, no matter what size she is 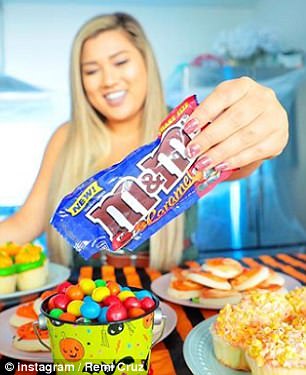 Savory tooth: Remi still allows herself treats (left in October 2017 at Halloween) but now mostly sticks to a diet of salad, sashimi and hummus (pictured right in November 2017)

And despite her self-esteem staying pretty much the same – ‘I’ve always been a pretty confident person, but now I’m even more confident’ – the blogger shared that she does feel proud of her achievement.

Admitting that she’s never been a fan of traditional exercise and listing running on the treadmill as one of her least favorite ways to get fit, Remi said she tried to find other ways to exercise.

She is a fan of celebrity favorite, SoulCycle, admitting she really pushes herself to go. ‘The key is to find a workout that you really love that doesn’t feel like a workout.’

She says she can’t believe how much stronger she is now and goes about ‘four to five times a week’, liking the fact that the instructor shows the class what to do and encourages her to push herself beyond her limits.

Moving onto what she now eats, specifically when it comes to snacking, Remi revealed that she’s a big fan of hummus and pita chips, explaining that because she has more of a savory tooth, she rarely craves sweet things.

She also admitted she likes to eat protein bars and hard-boiled eggs, taking viewers on a tour of her kitchen to highlight the physical changes she’s made.

In large glass jars that once held cookies,  Remi now has protein bars in their place, and giving an insight into her fridge, the blogger revealed she stocks up on sashimi from Whole Foods and white bean tortilla chips with salsa.

Moving on to cheat days, Remi says she doesn’t limit herself to one cheat day per week, preferring to ‘take it day-by-day’ and eat as healthily as she can, all of the time.

‘So if I want to go out and have some fried chicken on a Friday night and I let myself do it, the next day I just try to eat a lot healthier,’ she explained.

Push it: Remi, pictured here in November 2017, shared with fans that she loves SoulCycle classes as they push her beyond her limits 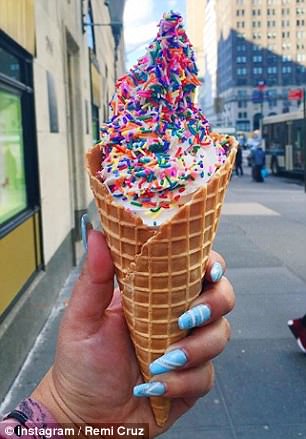 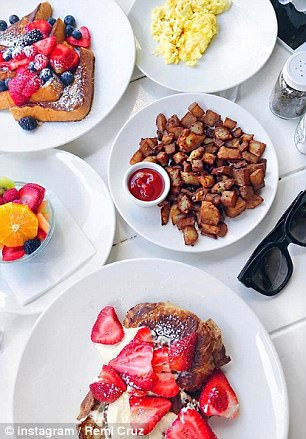 Self care: Remi, pictured here in 2015 before embarking on her weight loss journey, says she’s always been a confident person but feels much more energized and happy now

Small changes are key to her success – ‘If you cut everything cold turkey, it’s going to be extremely hard for you’.

Remi also recommends only drinking water or tea and not buying as much junk food – ‘If you don’t buy it and you don’t have it in your house, you can’t eat it.’

She also told the camera that she carries water with her at all times, and also loves salad, eating one at least once a day. Listing her favorite salad ingredients, she recommended basic, tomato and avocado.

However, she’s not a fan of weekly food prep and although she tried this once, prefers to choose her meals on a daily basis.

To deal with her junk food cravings, she says she has to be disciplined and it’s ‘really, really, really hard’, but says that because she’s the type of person that succeeds when she puts her mind to something, she’s able to use willpower to fight her urges.

But Remi did reveal that if she really wants a cheat meal, her vice of choice is fried chicken.

She also advocates that to succeed to have to ‘do it for yourself’.