A YouTube star has proudly shared a photo of her ‘super villain scar’ on her head after having brain surgery last week.

27-year-old Swedish inventor and YouTube star Simone Giertz announced in April that she had a non-malignant brain tumor was going to have to undergo extensive surgery. She took Twitter on Monday to give her 349,000 followers a post-surgery update.

‘Super villain scar in the making,’ she tweeted while sharing a black and white photo of the surgical scar on her head. 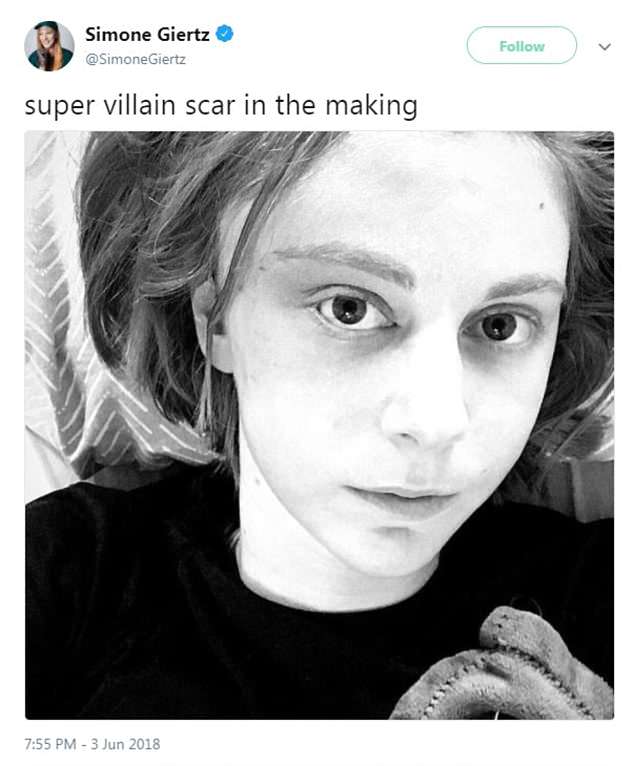 Positive outlook: The 27-year-old called it her ‘super villain scar in the making’

‘WE HAVE MATCHING SCARS NOW! Just means you and I are way more hardcore than anyone else! Happy you are doing better!’ fellow YouTuber Charles Trippy wrote, while someone else added. ‘Been there. You’re doing great.’

Simone has been candid about her diagnosis, and a few days before her operation she revealed that her mother had arrived in San Francisco to be with her.

The YouTuber even filmed a video of herself in the hospital right before her surgery on Wednesday. 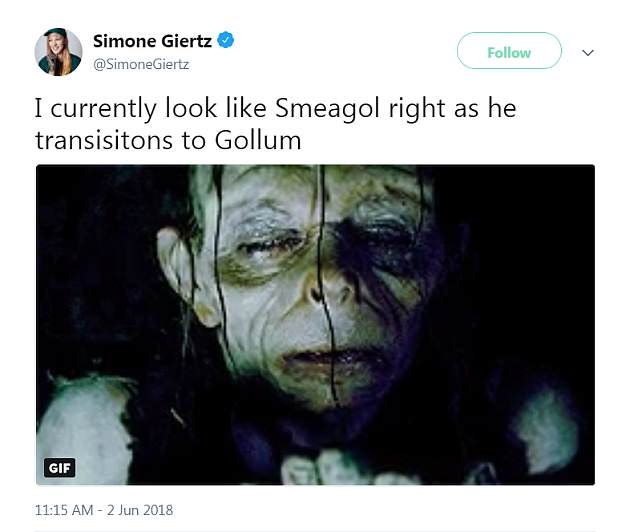 Laughing it off: Over the weekend, she joked that she looks ‘like Smeagol right before he transitions to Gollum’

‘Things are looking good’: Simone had surgery on May 30, and a third party posted an update later that day 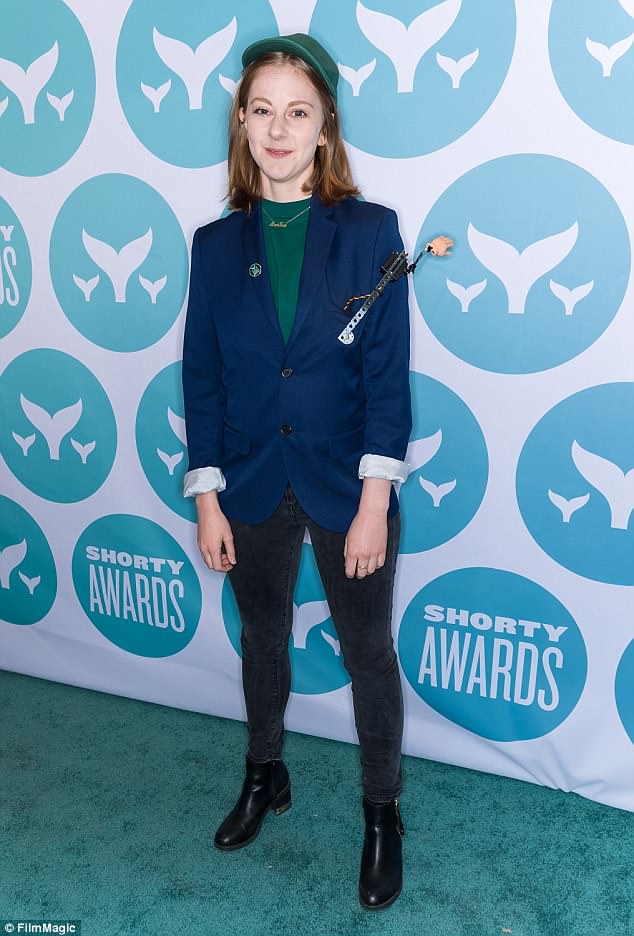 Star: The Swedish inventor and robots enthusiast has more than 1.1 million YouTube subscribers. She is pictured at the Shorty Awards in New York City in April

‘I’m at the hospital and I’m about to go into surgery,’ she said in the short clip. ‘The surgeon offered to take photos of my brain, and I’ve always been convinced that I have a really beautiful brain, so I am pretty excited about finally getting some proof.’

‘I’m feeling fine, but I am pretty scared,’ she admitted. ‘But that’s also the healthy response to the prospect of having your skull cut open.’

Simone went on to explain that the surgery is going to take eight to 12 hours, and she will have someone share an update after it is over.

‘I hope you’re having a good day. I hope you’re day is more normal than mine,’ she said at the end of the video.

Later that day, a third party shared an update on Simone’s Twitter page like she had promised. 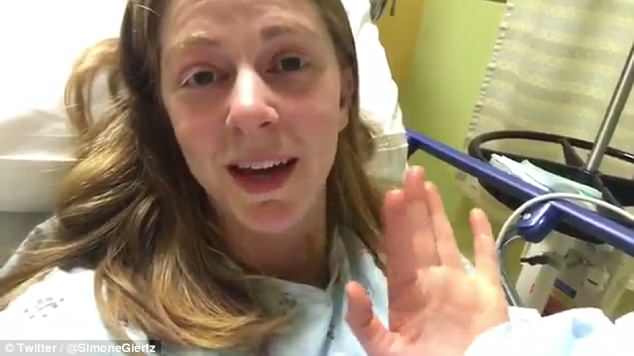 Update: The YouTube star shared a video of herself right before her surgery 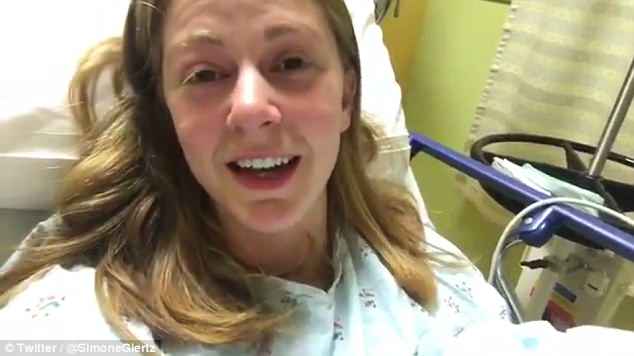 Honest: ‘I’m feeling fine, but I am pretty scared,’ she admitted. ‘But that’s also the healthy response to the prospect of having your skull cut open’ 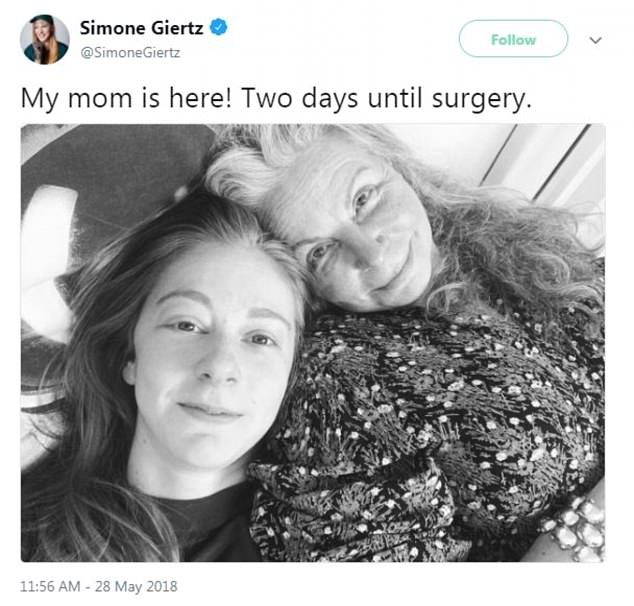 Support system: Simone’s mom was right by her side a few days before her surgery

‘Simone is out of surgery and her doctors are very pleased with how everything went. She woke up long enough to make an inappropriate joke… so things are looking good,’ the person wrote.

On Saturday, she returned to Twitter to joke about her post-surgery appearance.

‘I currently look like Smeagol right as he transisitons [sic] to Gollum,’ she wrote, and the next day she she joked about her struggle to type.

‘Things you probably never have to learn for yourself: steroids really make autocorrect so much more infuriating,’ she tweeted.

Simone first opened up about her diagnosis in a video she posted to her YouTube channel on April 30, explaining that she had a swollen eyelid on her right eye for about a year.

Ahead of her surgery, she revealed that she had named her tumor Brian 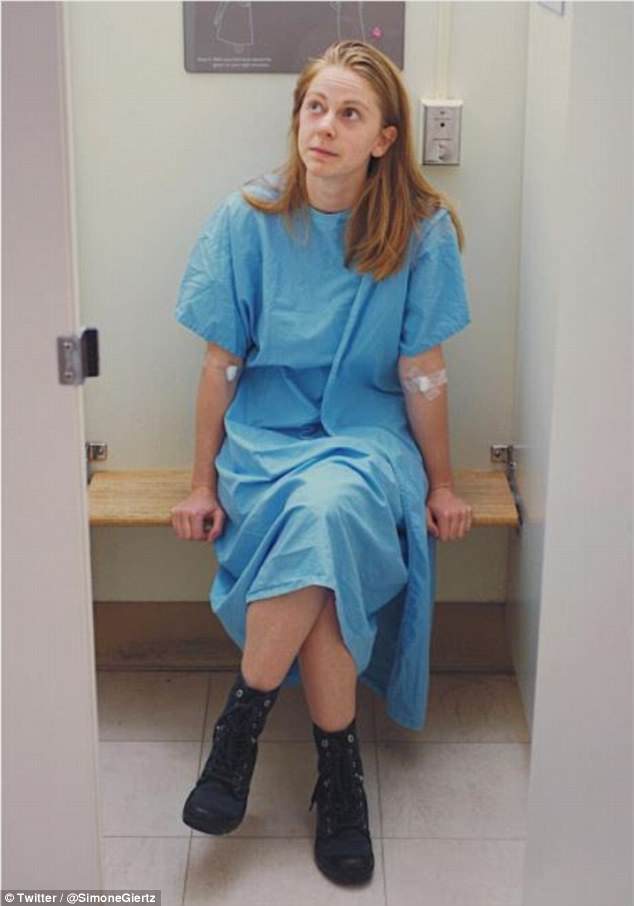 Candid: ‘What a crazy, unsolicited adventure all of this is,’ she wrote when she shared this photo on Instagram last month 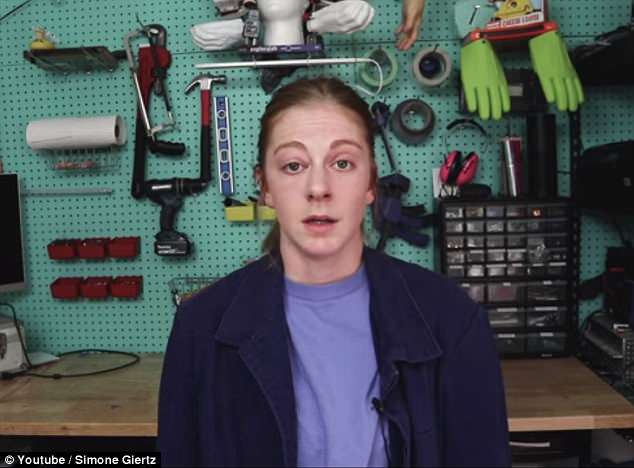 Reveal: Simone announced her diagnosis in a video she posted to her YouTube channel on April 30, explaining she had a non-malignant brain tumor and needed ‘extensive brain surgery’

Although some of her fans had commented on it, she chalked it up to allergies, but she eventually started having pain in her eye and eye socket.

After having an MRI, she found out that she had a ‘pretty substantial brain tumor.’

‘Good news is I’m probably not dying,’ she said, ‘ and it seems like the tumor is non-cancerous and benign. But it’s pretty big; it’s the size of a golf ball. I don’t even like golf, but I do like my brain a lot.

‘So I am going to have pretty extensive brain surgery, and I’m probably to be out for awhile.’

She later named the tumor ‘Brian’ and joked about him getting evicted the week before her surgery.

‘I’m going in to surgery in a week. This is your eviction notice, Brian the Brain Tumor,’ she wrote. ‘Please remove your property from my skull, eyeball and jaw muscle. I’m also keeping your security deposit.’