A YouTube star who was rejected from the University of Southern California has shared her thoughts on Olivia Jade Giannulli’s parents allegedly bribing her way into the school.

In her latest video, titled ‘Dear Olivia Jade, From a USC Reject,’ Emma Monden, 19, from California, opened up about how disheartening it was to learn that Olivia Jade, 19, supposedly got into the school under false pretenses when she ‘cried for weeks’ after she was denied acceptance.

‘I tried to do everything in my own power to give me the best shot of getting into that school, and so to see someone who literally did nothing and had their parents just completely do everything for them . . . it just makes me disappointed,’ she said.

Opening up: Emma Monden, 19, shared her thoughts on the college cheating admissions scandal in her latest YouTube video, titled ‘Dear Olivia Jade, From a USC Reject’ 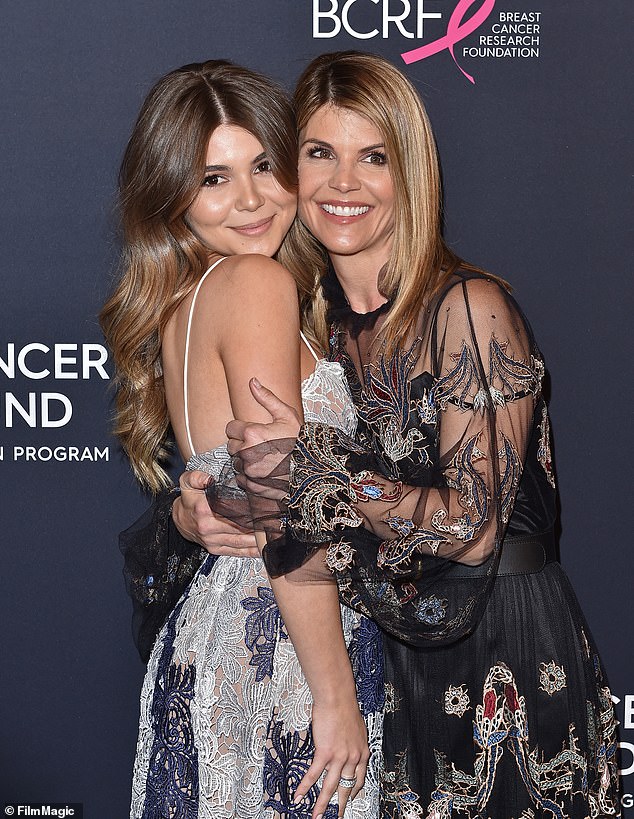 Olivia Jade’s parents Lori Loughlin and Mossimo Giannulli are currently facing up to five years in prison for falsely presenting her and her sister Isabella as crew recruits at the university and then allegedly paying over $500,000 in bribes to guarantee that both of them would be admitted to the school.

They are among 50 people who have been charged in the massive college cheating admissions scandal that has dominated headlines this past week.

Emma, who is a freshman at California Polytechnic State University, explained that she wasn’t trying to add to the backlash with her video, but the scandal had been on her mind, particularly because she had hoped to attend USC herself.

‘USC was my dream school. All throughout high school, I worked my butt off to do everything that I could to get into that school,’ she recalled.

Emma said the part that didn’t sit well with her was the fact that there was an actual crew recruit out there who was probably well-qualified and worked her whole life in the sport but was denied admission to the school to make room for Olivia Jade. 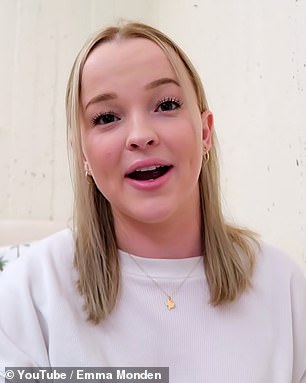 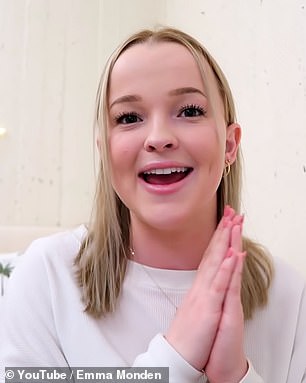 Heartbreak: Emma said she took AP and honors classes, got an SAT tutor, and worked as hard as she could to try and get into the University of Southern California but was still rejected 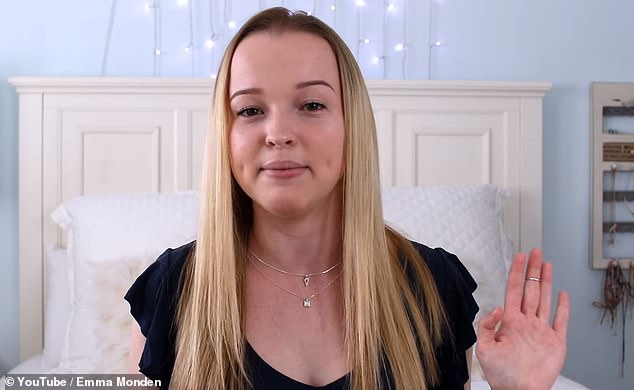 Looking back: Emma revealed she had gotten rejected from her ‘scream school’ in a YouTube video she posted in April 2018

‘That’s what I have a hard time with, especially being someone who applied to USC last year,’ she explained. ‘It was literally all I wanted in the world.’

Emma said her desire to get into USC was the reason she worked so hard in high school. She took AP and honors classes, got an SAT tutor, and paid someone with her own money to help her revise her essays and ‘make them as strong as possible.’

‘So seeing someone get handed that admission who didn’t work for it, it’s just hard to be completely honest with you,’ she said.

Whether or not Olivia Jade and her sister knew about the alleged bribery remains unknown, but Emma believes that they had to have some idea about what was going on.

According to court papers, Olivia Jade’s father took an ‘action photo’ of her on an indoor rowing machine to supplement her profile as a crew coxswain for the LA Marina Club. 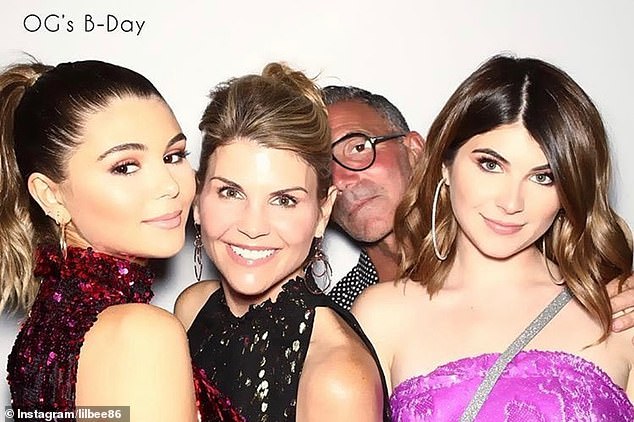 Scandal: Olivia Jade’s mother Lori and father Mossimo Giannulli allegedly paid over $500,000 in bribes to guarantee she and her sister Isabella Rose (right) would be admitted to USC 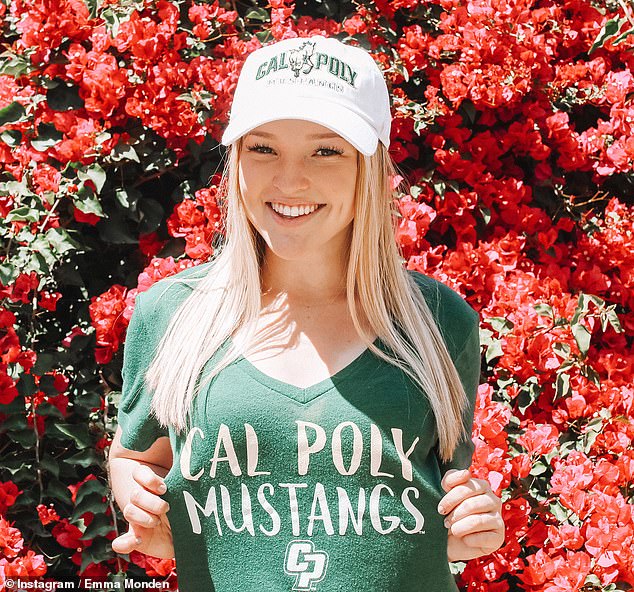 Upset: Emma, who is now a freshman at California Polytechnic State University, admitted that she ‘cried for weeks’ after she was rejected from the school

Emma also felt it would likely be obvious to Olivia Jade that she didn’t earn the grades or the test scores to be accepted into the school on her own merit.

‘Just given what Olivia has said in her videos about not caring about school, I am pretty sure that she would know that she didn’t get into USC on her own merit,’ she said, noting that the YouTuber had previously admitted that she just wanted to party.

‘I’m sure you would know that you didn’t get into USC because they have, like, a 13 per cent acceptance rate,’ she added.

Emma said the most disheartening thing about the scandal was learning how many people were in on it. 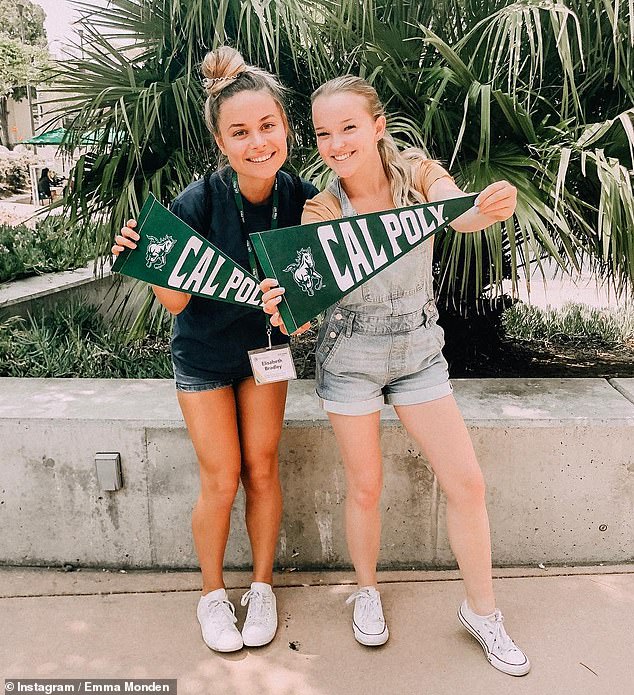 Moving on: Emma said the most disheartening thing about the scandal was learning how many people were in on it. 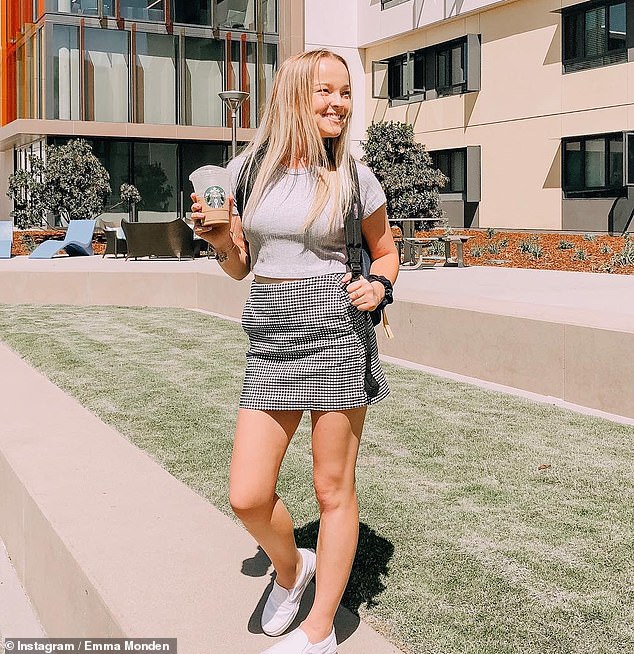 Opinion: The YouTuber believes Oliva Jade knows she didn’t get into USC on her own merit USC ‘because they have, like, a 13 per cent acceptance rate’

Emma had a message for high school seniors who are feeling frustrated and wary of the college admissions process.

‘You will end up exactly where you are supposed to be and you can know that you did it with integrity,’ she said. ‘I feel like that’s one of the most amazing feelings, to know that you got somewhere on your own merit. You’ve worked for it and you got the result.’

Although she believes she ended up in the right place, the college freshman said the scandal reminded her of how upset she was when she learned she wouldn’t be going to USC.

‘I am so happy to be where I am now. I love my school, but just looking back at last year and how devastated I was . . . I kid you not. Guys, I literally cried for weeks. I thought it was the end of the world.

‘Just looking back at how devastated I was to get rejected from USC and then knowing someone like Olivia who already had her career set up for her got in just for the experience of partying that’s what made me upset,’ she said. 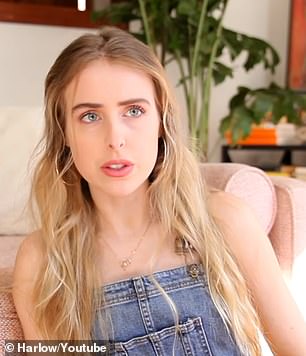 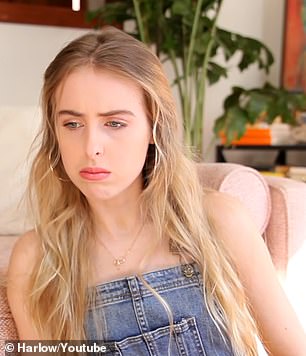 Having doubts: Olivia Jade’s former classmate Harlow Brooks admitted in a YouTube video that she was suspicious about how the YouTube star got into USC while managing her career 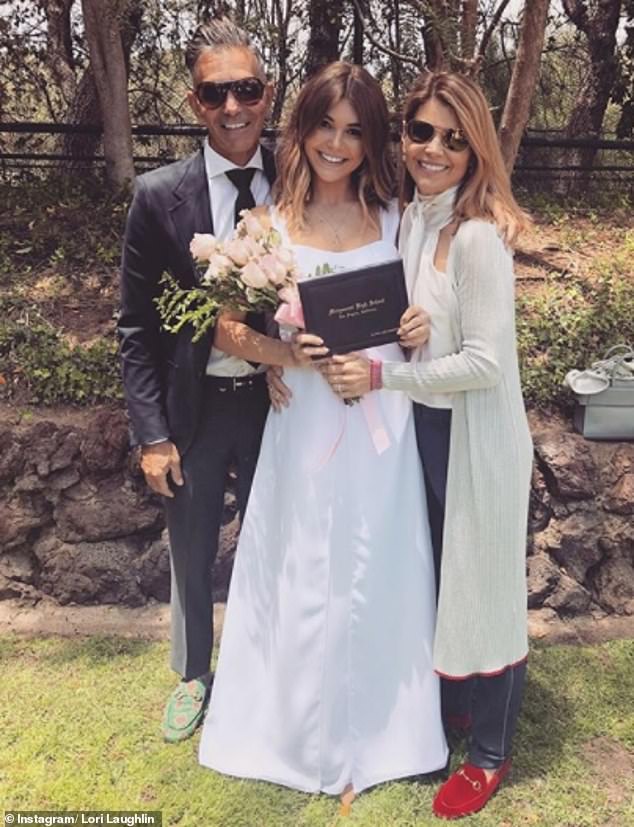 Allegations: The fellow vlogger claimed students took prescription drugs to survive the immense pressure they were put under by helicopter parents at the tough school 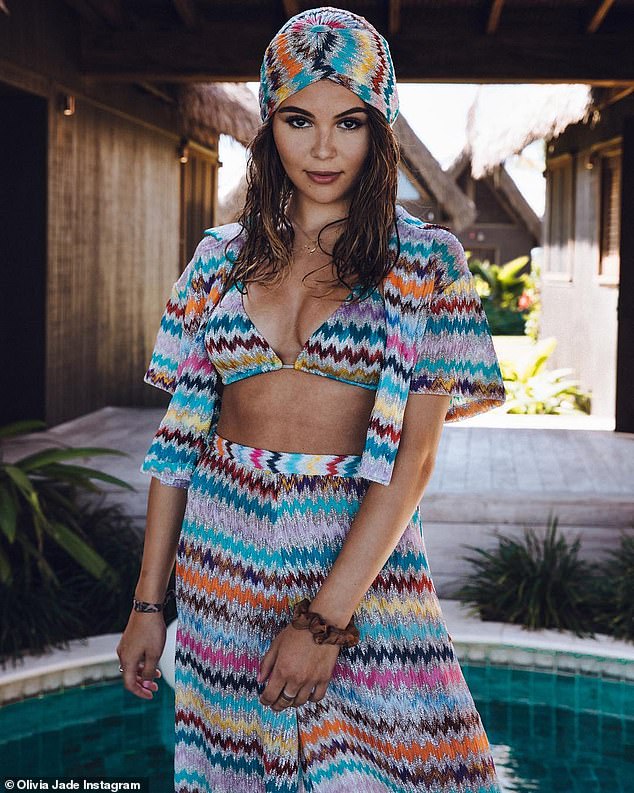 Just wondering: Harlow admitted she was confused as to how Olivia Jade managed to balance her school work with her life as an influencer

However, Emma insisted she is ‘not bitter’ about what happened; she is just disappointed in the whole situation in general.

‘I really feel for the people who feel that they were cheated by the system — myself included,’ she said. ‘If you have yet to apply to college, I just beg that you are honest. I think integrity is so important.’

Emma’s video came just a few days after Olivia Jade’s former high school classmate Harlow Brooks revealed that she was suspicious about how the YouTube star got into USC while managing her career as an influencer.

Although she didn’t mention the name of the Los Angeles-area high school she briefly attended, many people suggested it was the private Marymount All Girls Catholic High School in Bel Air.

In a YouTube video posted last Thursday, the fellow vlogger claimed students took prescription drugs to survive the immense pressure they were put under by helicopter parents at the tough school.

Harlow admitted she was confused as to how Olivia Jade managed to balance her school work with her life as an influencer and earn the grades to be accepted into USC, which is an ‘extremely hard’ college to get into.

Both Olivia Jade and Isabella decided to withdraw from USC last Thursday, reportedly due to the backlash their family had received since the news broke.