Warring gangs linked to the killing of a 14-year-old boy are glorifying violence and guns in videos watched by hundreds of thousands online.

Videos on YouTube show masked members of the Woodgrange E7 gang and the rival Beckton E6 crew rapping about gang rivalry and ‘shooting to kill’.

A feud between the gangs, based in east London, is believed to have led to the shooting of schoolboy Corey Junior Davis next to a playground in Forest Gate on Monday.

His family made the heartbreaking decision to switch off his life support machine on Tuesday night after he suffered catastrophic injuries from a shotgun blast to the head.

Corey, who has been linked to the Woodgrange group, was shot from behind at close range by a masked gunman in what locals believe was a revenge attack arranged by the E6 gang after the stabbing of an 18-year-old during a mass brawl at the nearby Westfield shopping centre on Friday. 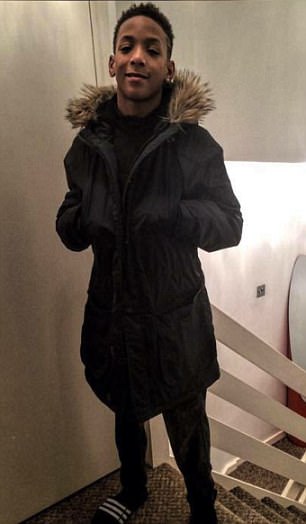 The family of Corey Junior Davis (pictured left and right), from East London, took the heartbreaking decision to turn off his life-support machine. The teen was shot in the head next to a playground in Forest Gate, east London, on Monday

It comes after Google, which owns YouTube, was accused last month of putting lives at stake and ‘glamorising gang culture’ for refusing more than half of police requests to remove gang videos inciting knife and gun crime in London from the video-sharing website.

Since 2015, YouTube has taken down only 38 per cent of videos reported to it by the Metropolitan Police.

None of the videos found by the Mail appeared to have linked advertising. But if any other videos do, it could mean gangsters could earn an estimated £5,000 a month from the adverts, from which Google also benefits.

On Monday afternoon, Corey was targeted as he sat near a playground on an estate. Another 17-year-old was left with ‘life-changing’ injuries after being shot in the leg.

A shop worker said his friend had been with Corey when the gunman opened fire.

‘They were just sitting there talking, and then this guy just came from behind and shot him,’ he said. ‘Fourteen years old, what can you do to get shot in the head with a shotgun?’ 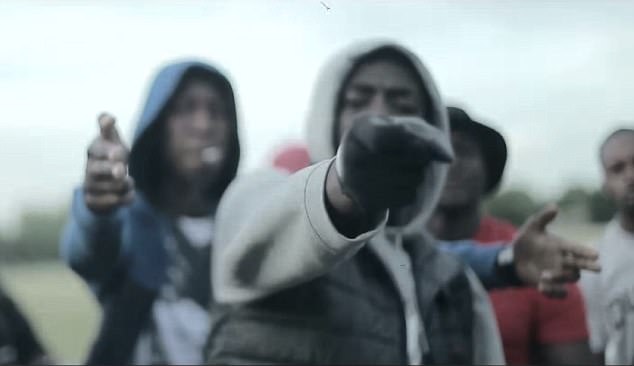 It comes after Google was accused last month of putting lives at stake and ‘glamorising gang culture’ for refusing more than half of police requests to remove gang videos inciting knife and gun crime in London. Pictured above, an E6 Beckton gang youtube music video 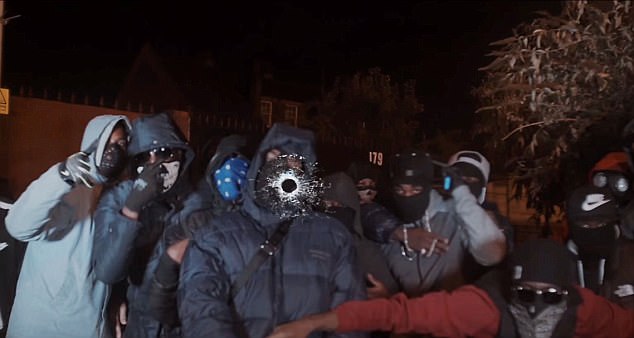 One clip, which seems to have been created by the rival Woodgrange gang has been viewed over 280,000 times

A resident said: ‘The shooting was outside the playground. I heard the noise from my house – pow, pow, it was twice.

‘The boy couldn’t talk, he was just laying down breathing hard. I didn’t want to look at him because I saw too much blood.’

Yesterday, Corey’s mother Keisha McLeod, 39, a council tax officer, and his sister Roshane, 23, were too devastated to speak. Miss McLeod describes her two children as her ‘pride and joy’ on her Facebook page.

Her father Neville McLeod, 75, who lived with Corey, nicknamed CJ, at his terraced home in Forest Gate, described his grandson as a ‘lovely boy’ and urged youngsters to stop carrying weapons.

He told the London Evening Standard: ‘There is nothing bad you could say about CJ. He was a lovely boy.

‘He was just in the wrong place at the wrong time. He never kept bad company, so we just have no idea why this has happened.

Mr McLeod added: ‘I’m feeling devastated, the whole family is. These people don’t care, they go around with these weapons. 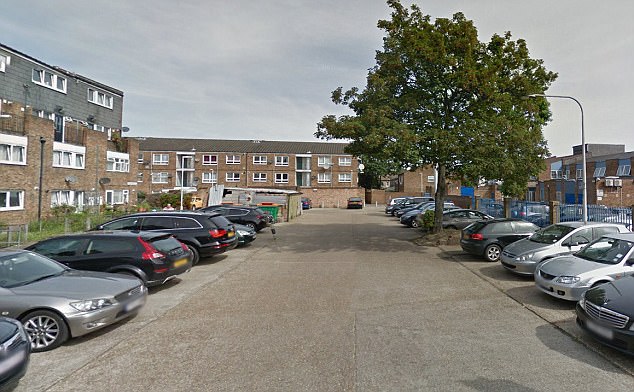 Police were called to Moore Walk in Forest Gate, east London, after a suspected double shooting left Corey fighting for his life and another with potentially life-changing injuries 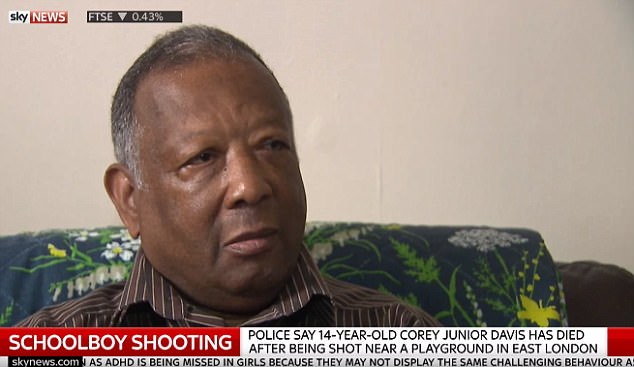 Corey’s grandfather, Neville McLeod, told Sky News earlier this week that the teen had only got into trouble ‘once’ 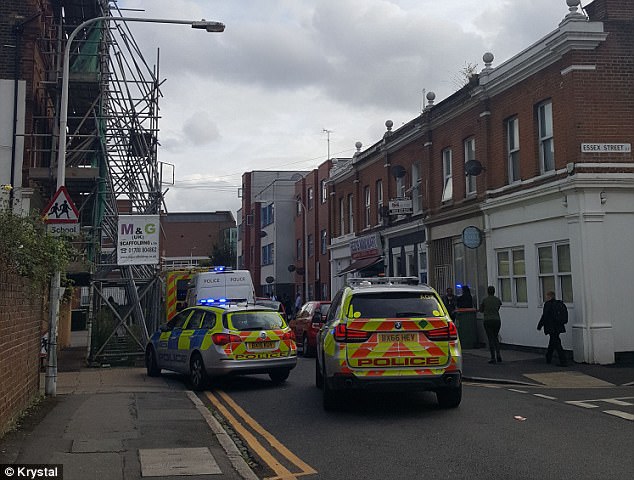 ‘I want to say to these people, stop it. Why do people have to go around carrying knives, guns, shooting and killing people?

‘There’s no reason for it. Why do they have to do it? They act like life is cheap. CJ did nothing to deserve this.’

There has been a surge in gun crime in the capital over the past year. The Metropolitan Police revealed there was a 42 per cent increase in gun offences in the year to April – up to 2,544 compared with 1,793 between April 2015 and 2016.

On Monday, a boy of 17 was charged with causing grievous bodily harm and possession of an offensive weapon in relation to the shopping centre brawl.

Regarding the shooting of Corey and his friend, police are trying to trace a vehicle seen leaving the scene.

Detective Chief Inspector David Whellams said: ‘We are working tirelessly to work through the evidence and piece together the events which led to Corey’s murder.

‘I am specifically appealing for information about a large, light-coloured 4×4-type vehicle seen leaving the scene immediately after the shooting.’

A YouTube spokesman said they have specialists around the world removing content that breaks their rules, adding: ‘While YouTube is a platform for free and creative expression, we strictly prohibit videos that are abusive or promote violence.

‘We work closely with organisations like the Met Police to understand where artistic expression escalates into real threats. We’re committed to improving our work on this issue to make sure YouTube is not a place for those who seek to do harm.’

So easy to find, videos with gun threats, crime and drugs… And their bitter rivals

Typing the names of the two gangs into YouTube opens up a sordid world of rap videos promoting gun crime, violence and drugs.

Woodgrange E7 and Beckton E6 have shared videos online that have been viewed hundreds of thousands of times and can be easily found by anyone with access to the internet. It is possible Corey Junior Davis’s killer watched some of the clips.

In the videos gang members, who appear to be teenagers and men in their 20s, can be seen smoking cigarettes and marijuana and drinking alcohol in the streets. They also make vile hand gestures including ones resembling punching and shooting. 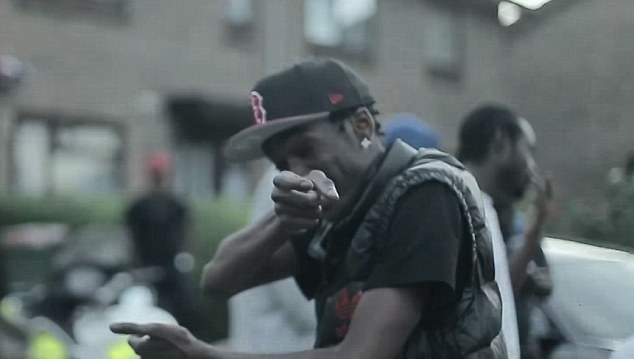 YouTube videos from the E6 Beckton gang promote gun crime, violence and drugs and have been viewed thousands of times

Chillingly, one video features a clip from a film showing a man with a bandage around his head who claims to have been shot in the head.

Another clip which appears to have been uploaded by the E6 group, includes the lyrics: ‘Spent cold nights in a cell… I’ve seen a couple youths get gunned.’

The lyrics ‘I beg a young boy come try me’ also feature, as well as a gang member posing as if shooting a gun.

Another video, thought to be by the same group, show men with their faces partially covered rapping the words: ‘Boom, boom, boom like who now’. 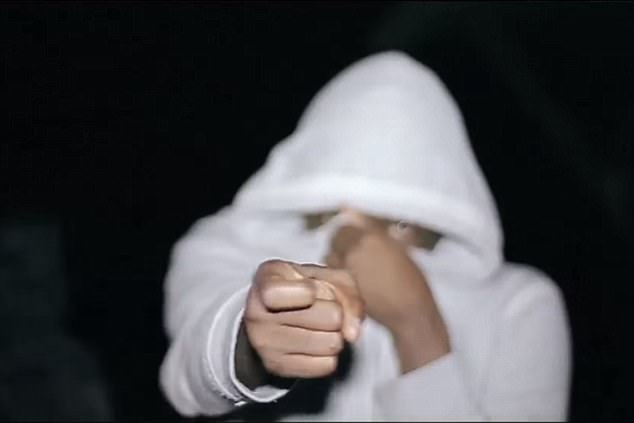 Another video, understood to be uploaded by members of E6, show men with their faces partially covered rapping the words: ‘Boom, boom, boom like who now’

One clip, seemingly created by the rival Woodgrange gang which jas been viewed over 280,000 times, begins with a shot from a helicopter of police on the street below, with the commentary: ‘Four officers arrived with minutes of the shooting’.

The screen cuts to men wearing masks, dark jackets and gloves rapping to the camera. A gunshot hole then appears in the screen while they rap ‘I’m shooting to kill’ and ‘We don’t give a toss about law’. In a similar video, which has racked up 107,000 views, gang members boast about ‘holding n***** to ransom’.

Some videos have attracted angry responses. On one, a rival wrote: ‘F*** Woodgrange you p******. We will see who the real dons of the east are.’

Another wrote: ‘You know you wouldn’t say s*** to us in real life…give me your address.’