Revealed: How ‘grassroots’ left-wing YouTube videos painting Britain on the brink of collapse amid NHS cuts and racial divisions are funded by RUSSIA

Left-wing activists and Labour politicians have been interviewed in a series of documentaries funded by the Russian state.

Berlin-based company Redfish has posted documentaries on YouTube including ‘Death by a Thousand Cuts: The Great NHS Sell-Off’ and ‘Children of Austerity: Poverty in 21st Century Britain.’

But councillors and trade unionists have appeared in the videos, seemingly unaware the company making them is a subsidiary of the Kremlin-owned media outlet Russia Today.

Berlin-based company Redfish – a subsidiary of the Kremlin-owned media outlet Russia Today. – has posted documentaries on YouTube including ‘Children of Austerity: Poverty in 21st Century Britain’

Guardian columnist Owen Jones appeared in the Redfish documentary, ‘Right Britannia: Race Hate in the UK’ as he took part in an anti-fascist march through London – but later admitted he ‘had no idea of the crew’s connections.’

He told The Times he was unaware of the connection and ‘had a policy of not appearing on RT’.

Redfish makes clear on its YouTube channel that it is ‘funded in whole or in part by the Russian government.’

Steve Hedley, senior assistant general secretary of the RMT union, appeared in the Redfish film about the rise of the far right.

Leeds Labour councillor Gohar Almass also appears in one of the documentaries.

Failed by the State: the Struggle in the Shadow of Grenfell, presented by a former resident of the tower block, blames the ‘cruelties of global capitalism’ for the inferno. 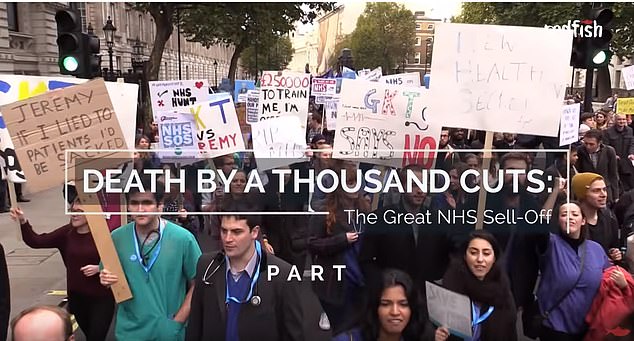 ‘Death by a Thousand Cuts: The Great NHS Sell-Off’ is one of Redfish’s YouTube videos

There is no suggestion those who featured in the documentary, which first aired in November last year, knew about its links to Russia.

Russia Today has been repeatedly described as a propaganda machine for the Vladimir Putin’s government and his foreign policy.

The UK franchise has also been accused of breaching impartiality and investigated by regulator Ofcom for spreading ‘materially misleading information’.

A US intelligence report once described RT as ‘the Kremlin’s principal international propaganda outlet’ and claimed it had links to Wikileaks and Julian Assange.

Mr Hedley and Mr Almass have been contacted for comment.