A YouTube prankster who inflated a bouncy castle inside the UK’s busiest rail station has been slammed by police.

Internet star Ally Law posted a video of him and his friends jumping around on the inflatable on the concourse of Waterloo Station on Wednesday.

The gang, wearing hi-vis vests to give the impression they were rail workers, filmed themselves blowing up the bouncy castle before inviting commuters to join them on it.

A YouTuber has been slammed for inflating a bouncy castle inside Waterloo Station. Ally Law filmed himself and his friends erecting the inflatable on Wednesday 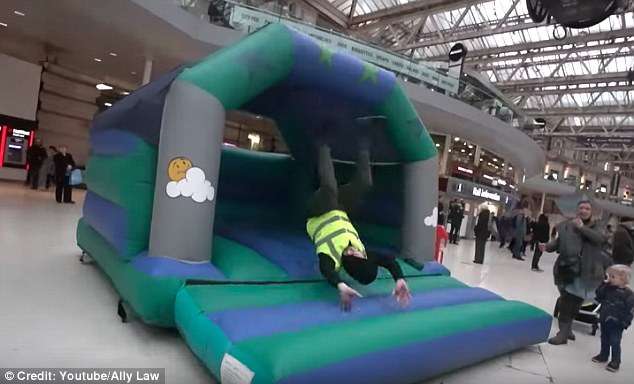 Station staff soon confronted the pranksters and asked them why they were there.

But one of the group replied: ‘It’s all good man.’

They continued to jump around on the bouncy castle and rail workers called police before unplugging the inflatable and telling them to leave.

Officers warned the jokers they could be prosecuted for ‘violating the railway act’, which could result in a fine of up to £1,000.

The video ends with Law saying: ‘With a (high) vis and a little bit of confidence you can get away with anything.’

British Transport Police tweeted: ‘Three gentleman thought it was acceptable to inflate a bouncy castle on @LondonWaterloo concourse. They were soon deflated and told to bounce @networkrail #InflationIsNoJoke’

It is understood no arrests were made.

A Network Rail spokesman said: ‘The incident on Wednesday was dealt with quickly by our station team and the British Transport Police, and the people involved were moved on from the station. 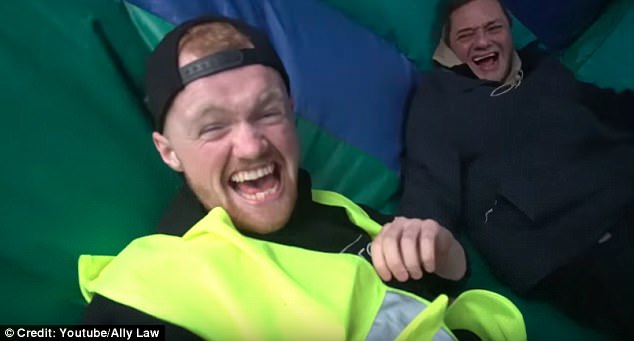 Law and his friends filmed themselves having a good time during the stunt, which was branded ‘unsafe’ by rail bosses 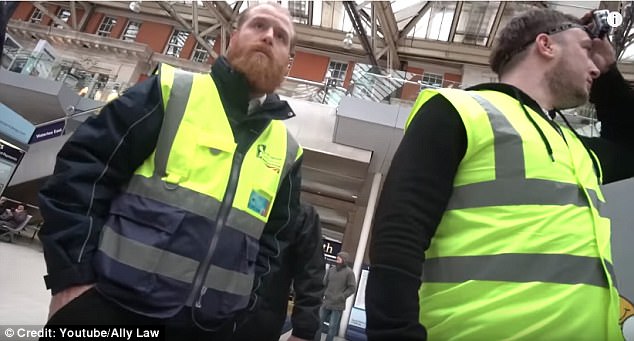 Security staff soon challenged the jokers, but one of the group replies: ‘It’s all good man’ 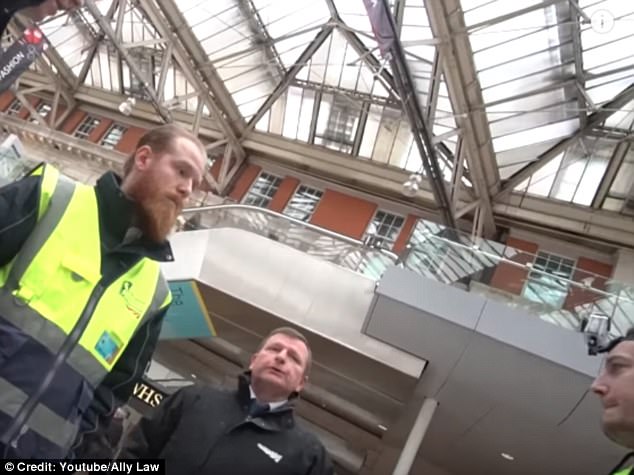 Eventually, police were called and the pranksters moved on. No arrests were made

‘While this was clearly intended to be a humorous stunt, this type of behaviour, on the busiest station concourse in the country, is not only unsafe, but also wastes the time of station staff, security staff and emergency services who are there to protect the travelling public’.

Law boasts 633,501 subscribers on YouTube and previous stunts include breaking into the O2 arena.

Last week he allegedly broke into the Big Brother House.