Comedian FriendlyJordies has hit back at NSW Premier Gladys Berejikilian and Deputy Premier John Barilaro with a ‘new and improved impression’ after being accused of mocking them with ‘racist’ impersonations.

The YouTube star appeared to mock Ms Berejiklian and Mr Barilaro’s accents in a video criticising the NSW Government’s handling of the bushfire crisis last week.

Mr Barilaro, who comes from an Italian migrant family, later slammed the video as ‘very offensive’ and ‘racist’ towards himself and Ms Berejiklian, whose parents were born in Armenia.

FriendlyJordies, whose real name is Jordan Shanks, responded to Mr Barilaro with a YouTube video titled ‘FriendlyJordies is cancelled’ on Friday.

The 29-year-old used an even more exaggerated Italian accent in a skit that likened Mr Barilaro and Ms Berjiklian to Nintendo video game characters Mario and Luigi.

In the skit, cartoon versions of Mr Barilaro and Ms Berejiklian dressed as the Italian plumbers jump on koalas to kill them and earn in-game points.

‘It’s a me, Barilaro. Do you like-a these koalas? We approved the Cabinet’s development and logging proposals in koala habitats, starving them,’ Shanks said, voicing the character in a stereotypical Italian accent.

‘We fast forwarded their extinction clock and didn’t make any effort in an attempt to save their populations. All with the help of my good-a friend.’

A cartoon of Gladys Berejiklian as Luigi then appeared titled ‘Player 2 #KoalaKiller’.

Shanks then accused Mr Barilaro of ‘mutilating’ Labor’s Native Vegetation Act 2003 and increasing land clearing in NSW by 1,300 per cent.

It is true that land clearing in NSW has increased by 1,300 per cent since late 2017, which is also when the Liberal-National coalition repealed the Native Vegetation Act.

Shanks finished off the skit by portraying himself as a video game enemy who says ‘bruz’ to attack Mr Barilaro, which is a reference to his previous video.

‘Oh! Someone hurt-a my feelings,’ Mr Barilaro’s character said, before running out of lives and dying in the game.

The comedian then revealed he is selling printed T-shirts featuring Mr Barilaro dressed as Mario while jumping on a koala, with the text: ‘Super Barilaro Bruz.’ 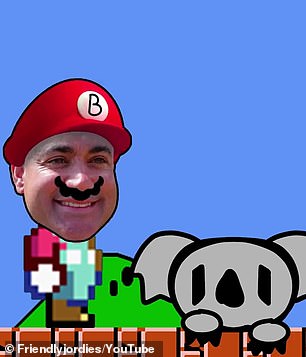 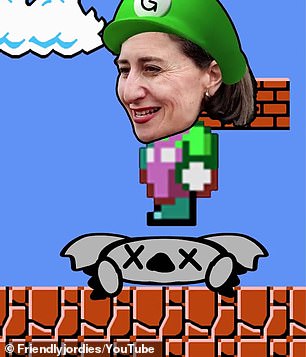 In the skit, cartoon versions of Mr Barilaro (left) and Ms Berejiklian (right) dressed as Mario and Luigi, respectively, jump on koalas to kill them and earn in-game points 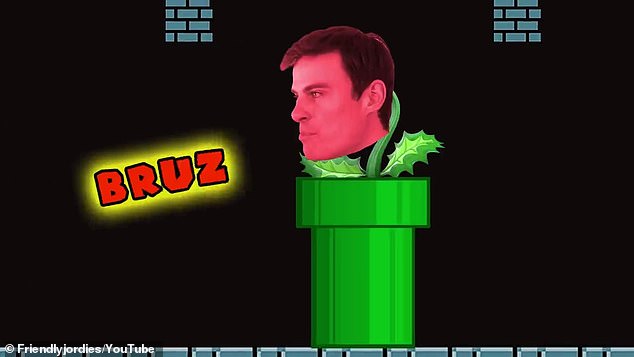 Shanks finished off the skit by portraying himself as a video game enemy who says ‘bruz’ to attack Mr Barilaro, which is a reference to his initial comments that ‘triggered’ the politician

In Shanks’ initial video about Mr Barilaro, which has been viewed more the 270,000 times, he used an a heavily exaggerated Italian accent while using the word ‘bruz’.

‘To imitate both myself and the Premier with such obvious distaste for our backgrounds is unacceptable. Our migrant story is actually the Australian success story, one this nation is proud of.’

In his latest video, Shanks pointed out Mr Barilaro ironically does not use his Italian birth name Giovanni and instead uses the Anglicised version John.

He also accused Mr Barilaro of ‘stifling the land-clearing debate’ by playing the political correctness card.

Mr Barilaro previously made a lengthy Facebook post in 2017 about how ‘political correctness is stifling our ability to find real energy solutions’.

Shanks concluded the video by encouraging his 420,000 subscribers to use the #KoalaKiller hashtag to describe Ms Berejiklian while using the #KoalaSaver tag to praise Labor Leader Jodi McKay to continue ‘triggering’ Mr Barilaro.

He previously called Mr Barilaro a ‘triggered little bi**h’ for getting upset at his jokes. 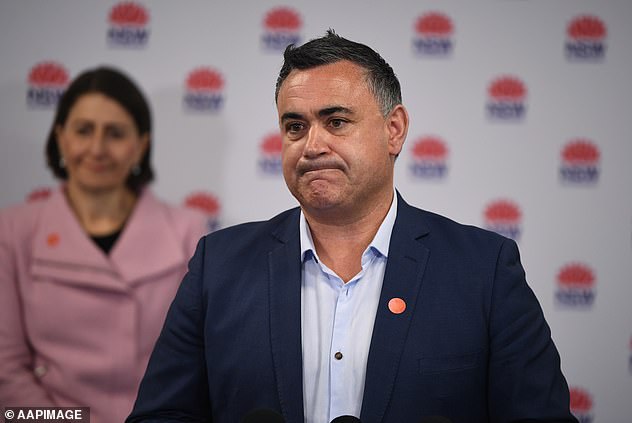 Shanks, who has long been vocal about his disapproval of the Liberal Party, sold t-shirts with a picture of Ms Berejiklian above the hashtag ‘koala killer.’

He previously called the impact of the fires to the environment the ‘greatest catastrophe to have ever faced this nation’s history’.

‘Post that nickname on every update she makes on social media from now until the day that she is faithfully booted out of office and if there is any justice left in the world, thrown in jail.

‘Because if there’s anything that we can positively gleam from living in the age of mass special extinction it’s that we also live in the age of Twitter pile-ons.’

Shanks was previously threatened with legal action for defamation by Clive Palmer, who he branded a ‘nutty turd’ and ‘crackpot’ and made shirts calling him ‘Fatty McF**khead.’

A NSW Government Spokesperson told Daily Mail Australia: ‘In 2019-20, the NSW Government will spend more than $1.7 billion to combat emergencies and disasters, committing an unprecedented $105 million in extra funding to enhance rescue capabilities across the State. 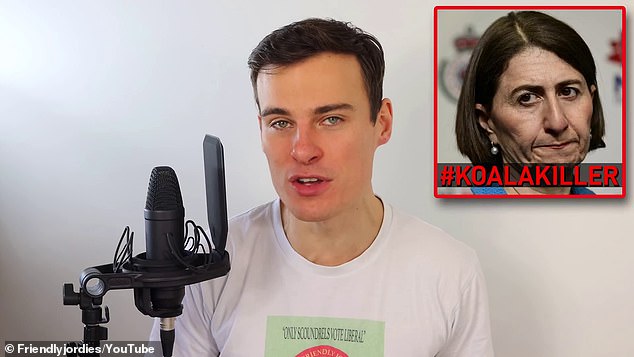 Shanks concluded the video by encouraging his 420,000 subscribers to use the #KoalaKiller hashtag to describe Ms Berejiklian while using the #KoalaSaver tag to praise Labor Leader Jodi McKay to continue ‘triggering’ Mr Barilaro