A 23-year-old YouTuber who dropped from a size 14 to a size six has how her weight loss prompted people to began ‘slut-shaming’ her online – calling her out for doing the things that they once found funny ‘when she was fat’.

In a heart-rending video, Remi Cruz, who is best-known for her YouTube channel MissRemiAshten, explained that she has always posted videos and photos of herself dancing and ‘acting stupid’, so she was shocked when people began calling her out for her behavior, only after she got ‘skinny’.

Opening up: YouTuber Remi Cruz revealed in a recent video that, after losing weight and dropping from a size 14 to a six, she is getting slut-shamed 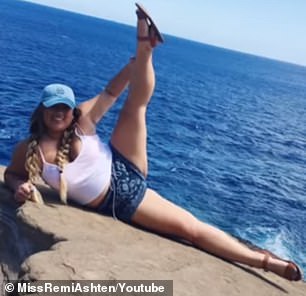 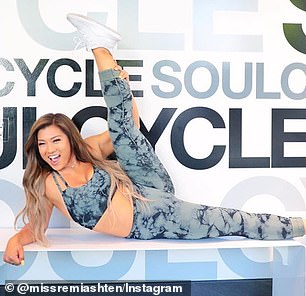 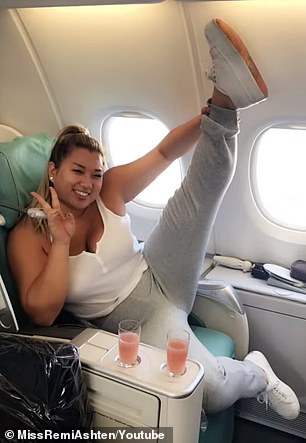 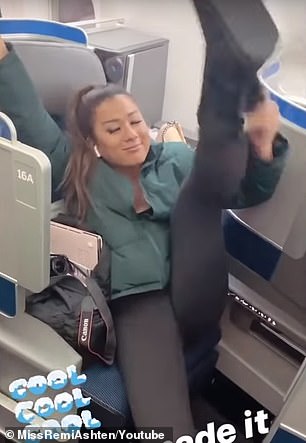 Confused: Remi said that when people began calling her out for doing the same things she did before she lost weight she felt confused because the only thing that changed was her body

Los Angeles native Remi Cruz uploaded a video to YouTube last Wednesday in which she revealed that people are slut-shaming her for doing the same things she did at a heavier weight, and was praised for doing, now that she has lost weight.

The 23-year-old, whose YouTube channel has almost 2.5 million subscribers, said losing weight has been a huge accomplishment for her.

She said: ‘It’s something that I am so proud of. I have completely changed my lifestyle, and I’ve never been this happy in my entire life.’

In the video, which has been viewed 1,244,920 times already, Remi added that although she has changed physically in the past year or so, she has also grown mentally and her interests have changed.

However, she explained that her morals, how she treats people, and her sense of humor have always remained the same.

‘My sense of humor has always been very idiotic. I’ve always just acted really stupid, and I don’t really care. I always just do whatever,’ she said in the video.

She added: ‘I’ve been throwing my legs up in the air since 2013 or however long.’

Remi said that taking pictures while posed with her leg up or in the splits has been something she has always done.

‘I’m surprised I have not torn a ligament yet from how many times I’ve done it,’ she joked. 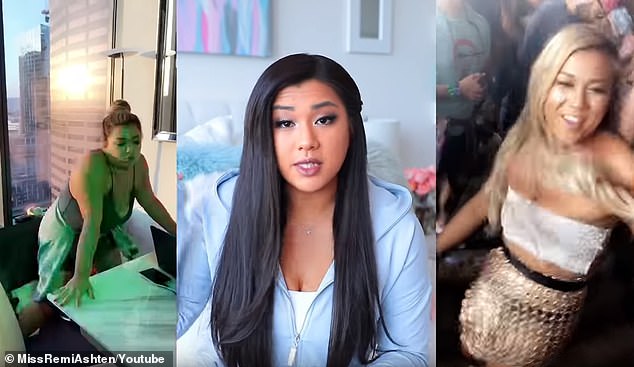 Slut-shamed: In the heart-rending video, Remi shares examples of how she acts the same way now (right) as she did before she lost 50lbs (left)

However, the YouTuber said that once she lost weight and dropped to a smaller size, people thought differently of her for posting the photos and videos.

Remi said that she was doing the exact same things she had done before, and that ‘the only thing that had really changed was my body shape’.

‘That is the double standard that I’m facing.

‘At one point, there was that initial comment for me that went from “Oh my god, that’s so funny”, to “you’re a slut”.

‘And when it happened, the only thing I can say that I felt is just pure confusion because I hadn’t changed,’ she added. 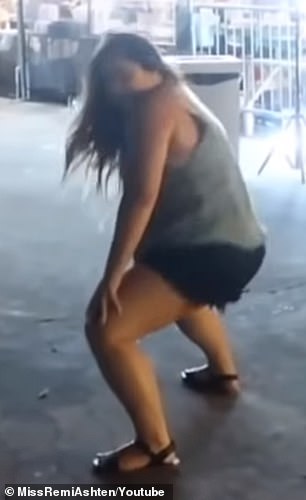 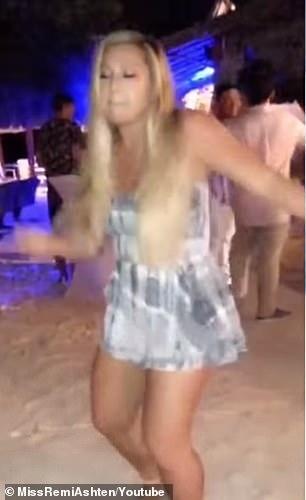 Dancing queen: The 23-year-old YouTuber said that she has always had an ‘idiotic’ sense of humor: ‘I’ve always just acted really stupid, and I don’t really care. I always just do whatever’ 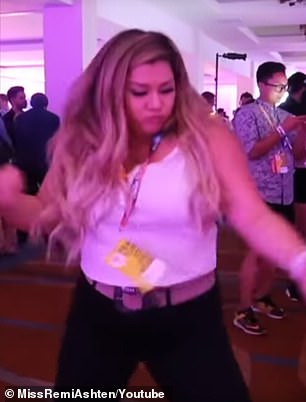 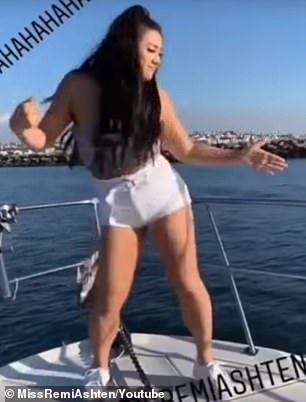 ‘I’m still doing the same thing, I still have my leg up in the air, I’ve been doing this for years, people.

‘I’ve been dropping it low on the dance floor, twerking out in public not caring. It was funny.

Remi added that when she was a larger size, she felt that people looked at her dancing in public and appreciated the confidence she had for doing so.

However, upon losing weight, she said the attitude shifted.

Remi recalled seeing a photo on Instagram of model Alissa Violet posing in a bikini, and reading the comments to find people complimenting Alissa, and saying kind things.

She wondered what would happen if she posted a recreation of the photo, and she wanted to see what the result would be.

She put on a bikini, took the photo, and subsequently posted it to her Instagram page.

Remi, who had previously blocked certain words including ‘fat’, ‘obese’, and ‘weight’  from being commented on her posts, removed all comment filters before posting the photo.

The following day, the YouTuber read out some comments that she had received on the post, which was captioned ‘If only you knew’. 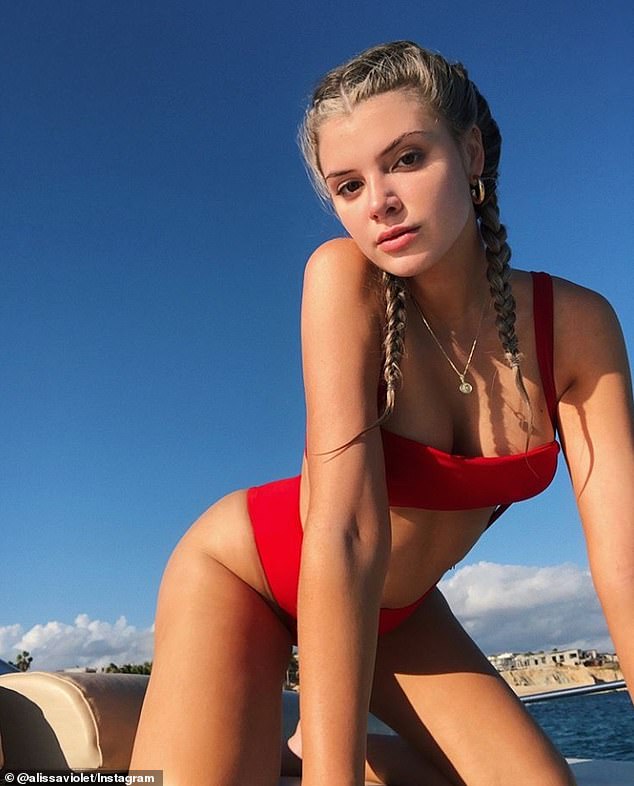 Strike a pose: Alissa Violet, a model and Instagram star, shared a photo (above) of her posing in a bikini to her Instagram page last week, and received hundreds of compliments 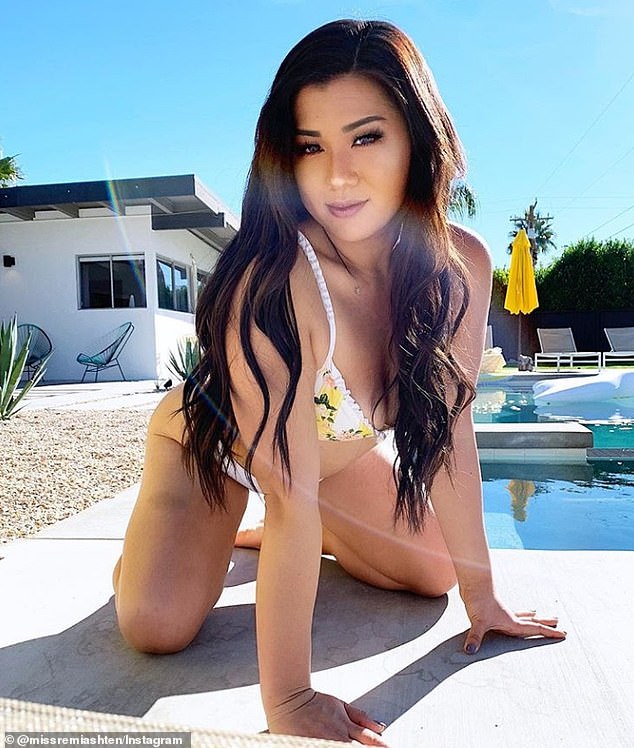 Photo Inspo: Remi saw the photo of Alissa and decided to recreate it herself (above). She then posted it to Instagram and waited to see what people would say about it in the comments 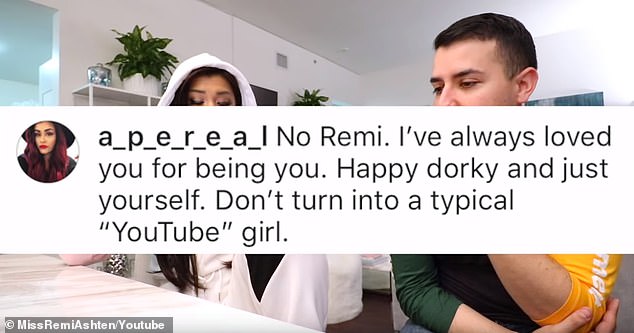 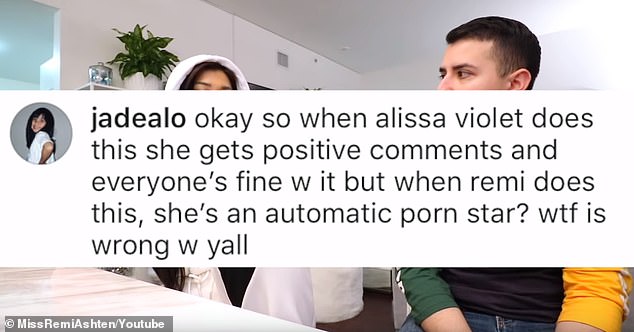 One user wrote: ‘No Remi. I’ve always loved you for being you. Happy dorky and just yourself. Don’t turn into a typical “YouTube” girl.’

She added that although she received numerous ‘nice’ comments, one mean comment can ‘really really ruin your day’.

‘Honestly it made me feel really bad for a really long time, and now I’m at the point where I can’t please anyone.

‘What I’ve learned overall is that I just need to be unapologetically myself. 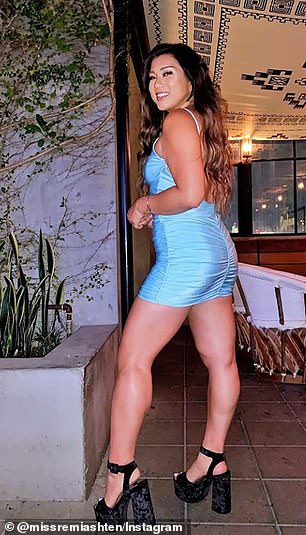 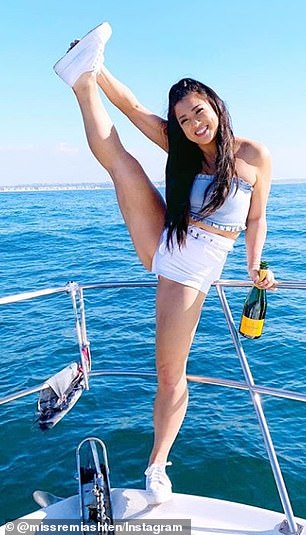 A different mindset: The Los Angeles native said that losing weight has helped her to become the happiest she has ever been 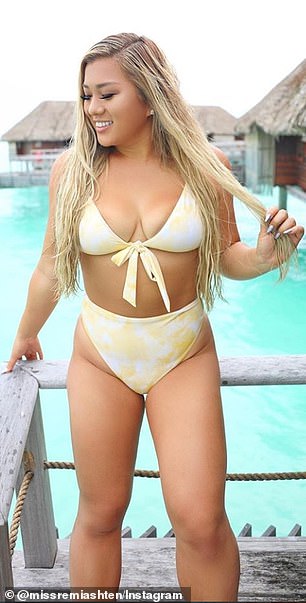 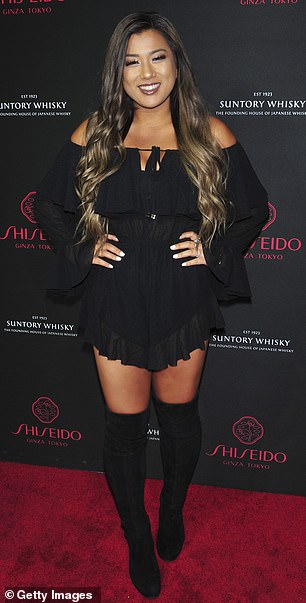 Positive thinking: Remi said that despite receiving mean comments from people on social media, she has learned to be unapologetically herself

She added: ‘I’m going to keep being my obnoxious, stupid, idiotic, stupid sense of humor self because I like it, and it makes me happy and I have fun.’

The YouTube video was inundated with positive comments from viewers.

One wrote: ‘MY FAV VIDEO OF YOURS!!! Rem you have such a beautiful soul and I’m proud of you for speaking up about this topic. I love you!!!!’

‘It’s sad that the majority of body shaming comes from other females,’ wrote another.

Another comment read: ‘Wow, it just makes me sick that some people can comment such mean and hurtful things! Remi, thank you for being you and for being so awesome! You are beautiful and inspiring!’

Another user added: ‘Seeing those comments literally makes me so frustrated!!! I’ve always loved your personality and admired your confidence since I started watching you a couple years ago. I’m so glad people have such a great person to look up to who is making a positive impact.’