A design change which would allow users to listen to YouTube without video would reduce the company’s carbon footprint by up to 500,000 tonnes of CO2 per year.

YouTube’s annual carbon footprint amounts to 10 million tonnes of CO2 equivalent per year, according to researchers.

Streaming videos uses a lot of energy, in order for your internet or phone network to carry the video to you, they go through servers at data centres that host them.

Data centres owned by companies like Google, which owns YouTube, use massive amounts of carbon dioxide, produced by coal or natural gas, that often power them.

The University of Bristol’s estimates are based on data from YouTube released publicly on the electricity needed used to power the streaming site globally in 2016.

They say that the video streaming giant could reduce their carbon footprint if they allowed users to listen to audio on an inactive screen.

Data centres owned by companies like Google, which owns YouTube, use massive amounts of carbon dioxide, produced by coal or natural gas, that often power them. The estimates are based on public data from YouTube. Here, Google’s data centre in Germany

Non-paying users hwo listening to the app requires it to be kept open and the screen active.

Currently only YouTube Premium subscribers who pay a monthly fee are able to listen to audio without use of the screen.

Professor Chris Preist, who led the study said that efforts to cut down on ‘digital waste’ and make the digital pipeline more environmentally friendly tend to focus on data centres but also accounting for it is supplying the hardware.

Professor Priest told MailOnline: ‘The energy is used in the YouTube data centres, but also in the network equipment spread around the world, including the mobile transmission masts if you are watching on a mobile phone.

‘YouTube buys green energy for its own data centres to offset that part, which is a really good thing to do.’

He said that Google is one of the leading companies from an environmental point of view that does this.

The study, however, noted that the energy used to power servers and networks is roughly the same amount as Luxembourg or Zimbabwe’s yearly output.

This is roughly equivalent of the annual greenhouse gas produced by 30,000 UK homes.

Dr Daniel Schien, one of the researchers, said that tech companies should implement the radio mode as a sustainability feature to reduce digital waste. 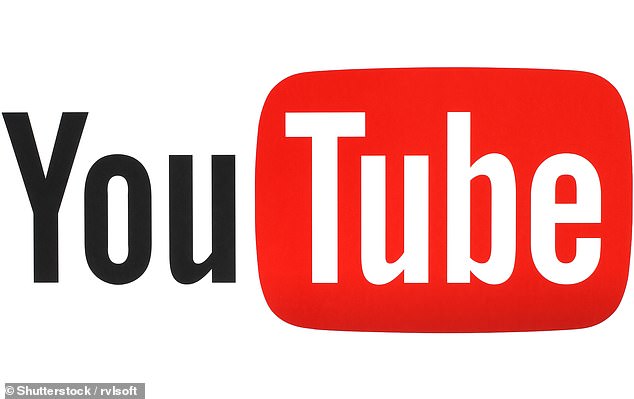 Youtube now has now reached two billion users logged in every month despite recent controversies revolving around harmful and disturbing content. The Google-owned company was at 1.8 billion viewers a year ago but has now crossed the milestone

Other features could include the option to disable videos from autoplaying, or not letting podcasts download new episodes if there is an unplayed backlog.

‘It’s down to the companies to design these services so that they can be delivered efficiently to the whole planet,’ said Professor Preist.

It’s incredibly difficult to measure a carbon footprint directly, so scientists are often forced to estimate how much carbon is produced by different activities.

As well as the data from YouTube, the team used Netflix data centres energy figures, which they believe are similar in efficiency to YouTube’s networks.

HOW COULD TECHNOLOGY FIRMS REDUCE THEIR CARBON FOOTPRINT?

Digital technology companies could reduce the carbon footprint of service like YouTube by making changes to how they are designed, the study said.

The energy used to power servers and networks which allow users to watch millions of videos a day is roughly the same amount as Luxembourg or Zimbabwe.

The researchers suggest that making sustainability the primary focus of projects involving the use of technologies has more potential to offer in terms of carbon savings than companies currently explore.

‘Digital services are an everyday part of our lives,’ said lead researcher Chris Preist, Professor at University of Bristol.

‘But they require significant energy to deliver globally — not only in data centres, but also in networks, mobile networks and end devices – and so overall can have a big carbon footprint,’ Professor Preist said.

The reductions that could be gained by eliminating one example of ‘digital waste’ – or having the option to have the screen inactive to people who are only using YouTube to listen to audio.

They estimated this could reduce the footprint by up to 500,000 tonnes of CO2 annually – the carbon footprint of roughly 30,000 UK homes.

Professor Priest and his team took into account the proportion of viewers watching on different devices, such as smartphones and laptops, based on user figures provided by the BBC.

The research also doesn’t look at how much carbon was produced during the manufacturing process of the hardware that makes streaming possible like servers, computers and phones.

‘We use YouTube as an example to show a few things, Professor Priest said.

‘Firstly, even though for each of us our ‘digital carbon footprint’ is small, for any big global service such as YouTube it adds up to be something worth paying attention to.

‘Secondly, by understanding the big picture (not just the data centres) software designers can find new ways of reducing it.’