You’ve been drinking alcohol all wrong!

From serving white wine with fish to sticking a spoon in an opened bottle of bubbly to preserve the fizz, there are certain habits we’re all accustomed to sticking to.

But it turns out some of the most ways to serve and drink alcohol are in fact myths that could be ruining your enjoyment of your favourite glass of red or refreshing gin and tonic.

Drinks expert Matthew Iovane, Director of premium sake brand HEAVENSAKE, has revealed the habits we’re all guilty of, such as pairing red wine with cheese, and focus on choosing the best match for the weight, flavour and texture of the dish.

These days, most people would agree that pairing wine with food depends on the specific flavours, weights and textures of the dishes.

‘The best option to pair red wine with fish is to select wines with very little or no tannins, particularly if a drizzle of lemon has been added to the fish as it clashes with these wine elements, leaving a bitter, metallic and searing aftertaste.

In general, light oaky reds perfectly pair with grilled fish, because of the charcoal smokiness – examples include a fresh Pinot Noir and a Beaujolais.

Mature reds, for instance, should be paired with fish dishes that include a few earthy ingredients like root vegetables and squash.

White wine is surprisingly a great match with cheese. White wines have a higher level of acidity which helps it slice through the heavy taste of some cheeses.

Avoid serving very dry white wines with cheese, and aim for varieties with a little residual sugar – while acidity cleanses the palate, offsetting that greasy feeling.

In addition, soft and rich cheeses, such as Camembert and Brie, often pair nicely with white wines made from Chardonnay grape varieties.

Examples of great pairings include Port and Blue Cheese, Cabernet Sauvignon and aged Gouda, Riesling and Ricotta, and Malbec with a good aged Cheddar cheese.

Beers, wine and liqueurs have a long shelf life due to their high alcohol content and sugars. However, one rule doesn’t fit all.

Whether it’s a new bottle or you’ve had a couple of glasses, red wine should be re-corked and stored in a cool environment ( 12 – 190° C), sparkling white wines will need to be stored on the cooler side (5 – 8° C), and a full-bodied wine on the higher end of the scale.

Both red and white wines should be re-corked after opening and stored on their sides to prevent cork rehydration. 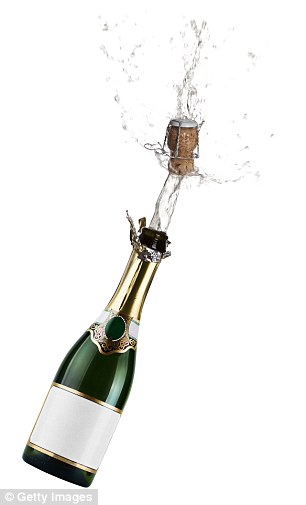 If you want to keep your champagne fizzy, sticking a spoon in won’t do any good (stock image)

Lastly, liquors such as vodka, rum or whiskey, can be stored at room temperature. A cool, dark place with a regular temperature, such as liquor cabinets are perfect for drink lovers. There is no evidence that storing vodka in the fridge helps the drink last longer.

The key is to keep the bottle chilled as cold temperature retains more carbon dioxide.

Dangling a teaspoon has been proven to have little effect on preserving carbonation.

Instead, and if you’re looking to keep your fizz, look out for champagne stoppers or other wine tools, which allow you to pour a drink, without pulling the cork.

Sake can and should be paired exactly as wine is paired, with diverse and international dishes. HEAVENSAKE in particular spearheads this revolution to dispel the myth that sake is only paired with Asian cuisine, because it’s blended using the expertise of champagne cellar master Regis Camus.

We have created a flavour profile in a world unto its own perfectly complimenting dishes such as burrata, beef tagliata and saffron risotto.

Whiskey, for instance, only ages in the cask, but not in a bottle. You should store it at 15.5 to 19.4 degrees in a dark environment, and make sure it’s upright so it doesn’t come into contact with the cork.

When taken care of properly, whiskey can be kept indefinitely, while the same goes for gin and vodka.

Take care with cream liqueurs however, that will start to spoil over time.

Sake is much lower than wine in tart components such as tartaric and malic acids but higher in amino acids. As a result, it’s rich in umami, the ‘fifth taste’ that makes the savoury flavours of meat and cheese so appealing.

The temperature at which sake should be consumed depends on the quality of purity of the sake. As a general rule of thumb all umami style sake should be drank cold, much like a glass of white wine.

The same applies to drinking a glass of water in between drinks, as well as cheaper alcohol in general.

This is due to premium alcohol being distilled more times, therefore containing less congeners due to the filtration process.

HEAVENSAKE has recently partnered with C London restaurant in Mayfair to launch its first sake pairing series that bring together the best authentic flavours from Italy and HEAVENSAKE’s both sake expressions, the Junmai Ginjo and Junmai Daiginjo.